Free vs Regulated Banking: Introduction to the United States vs Canada

3 MIN READ - The Cautious Optimism Correspondent for Economic Affairs and Other Egghead Stuff reopens his series on free versus regulated banking, this time focusing on the contrasting financial histories and banking systems of the United States and Canada. 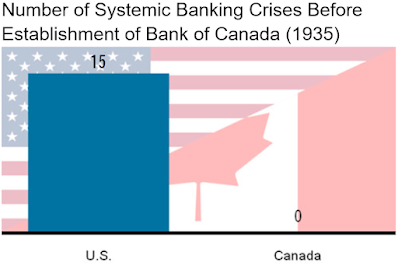 By “very lightly regulated” or “unregulated banking” the Correspondent means:

-No government backstops or bailout loans

-No government restrictions on banknote issuance

-No government restrictions on number of bank shareholders or partners

-No government restrictions on bank branching

As evidence the Economics Correspondent produced histories chronicling Scotland’s nearly 100% deregulated “free banking” era of 1716-1845, under which that country experienced zero systemic crises, and England’s heavily regulated system which included the privileged and later monopoly Bank of England and endured at least ten systemic crises during the same period.

Starting this January we’ll examine the parallel experience of North America when Canada, whose banking industry was very lightly regulated and had no central bank until 1935, experienced zero banking panics during its own “free banking” era of 1817-1935. Within the same period the United States, with a slew of perverse bank regulations and three central banks (1791-1811, 1816-1836, 1914-present), endured at least thirteen systemic crises.

Furthermore, prior to the 1817 founding of Canada’s first commercial bank, the Bank of Montreal, the United States suffered two more bona fide crises in 1792 and 1797 and has endured two more crises since 1933: the 1980’s S&L Crisis and the 2008 Great Financial Crisis, bringing its total to seventeen.

Some economists argue the United States also suffered from banking crises in 1861, 1901, and 1921, but the impact of those disruptions on the financial system was more limited.

But surely, according to Paul Krugman of the New York Times and Modern Monetary Theorists such as Warren Mosler and Mike Norman, America’s lousy record of banking panics can't be blamed on regulation. Rather the problem had to be that antiquated, unstable gold standard.

Well, aside from the problem that Canada and Scotland also operated on the gold standard during their crisis-free, free banking eras, the entire world has been far more unstable in the modern era of fiat money and government central banks than under gold.

During the classical gold standard period of 1875-1913, the most honest gold standard ever allowed by most governments, a total of ten financial crises occurred worldwide in five countries. Unsurprisingly, seven of them were in the heavily regulated United States (5) and Great Britain (2).

In the four decades since the end of the Bretton Woods international gold standard (1971-2010), where fiat money has reigned supreme while governments and their central banks regulate financial systems more than ever before, the world has entered an unprecedented era of crisis with 107 financial crises in 83 countries (Calomiris, Columbia University).

Finally, during the most tumultuous years of the Great Depression (1929-1933) the United States, with a regulatory “lender of last resort” central bank—the Federal Reserve System, was decimated by nearly 10,000 bank failures. In Canada, which had no central bank and scant few regulations and whose economy was hit just as hard as the United States, zero banks failed.

The United States and its banking history will be discussed first in forthcoming columns.

To read the Economics Correspondent’s histories of the crisis-prone English and remarkably stable Scottish banking systems, go to: