Free vs Regulated Banking: British Parliament and the Bank of England (Part 3 of 3)

5 MIN READ - The Cautious Optimism Correspondent for Economic Affairs and Other Egghead Stuff concludes with the third and final installment examining the history and failings of England’s crisis-prone banking system. 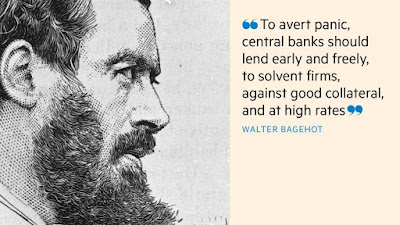 With each successive suspension of the 1844 Peel Act’s banknote restriction the Bank of England gradually adopted a policy of providing liquidity to strained private banks by lending its notes on a short-term basis. Each new ensuing crisis, while still serious and disruptive to the economy, ended progressively faster and with less economic damage than the great panics of 1825 and 1837.

By 1873 banker and The Economist editor Walter Bagehot (pronounced “badge-it”) could see clearly both the causes of and remedies to England's now-fifteen banking panics stretching back to 1694 and outlined two proposals for monetary reform in his seminal book “Lombard Street: A Description of the Money Market.”

In Bagehot’s opinion the Bank of England’s banknote monopoly was at the root of the problem. England, he said, should do away with the central bank completely and move towards a free, unrestricted, competitive and decentralized banking system like that which Scotland had enjoyed without a single crisis from 1716 to 1845.

But the Bank of England was now so engrained in English culture for nearly two centuries, Bagehot opined, that it had become as impossible an institution to remove as the Queen herself.

Thus his second best solution was for the Bank to use its considerable powers to clean up its own mess.

When the central bank creates a crisis, he argued, it should stand ready to help solvent but temporarily illiquid private banks weather the storm by lending generously on good collateral at high rates of interest, a prescription famously referred to today as “Bagehot’s Dictum” or “Bagehot’s Rule.” After the crisis abates and returning depositors replenish the banks’ reserves, he said, they can then settle their emergency loans with the central bank.

Bagehot’s book was well received by the public, the industry, and lawmakers and the Bank of England officially assumed the “lender of last resort” policy, the first adopted nationwide anywhere.

Although U.S Treasury Secretary Alexander Hamilton and English economist Henry Thornton were believed to have anticipated and proposed similar remedies in 1792 and 1802, Bagehot gets official credit having both articulated it so well in 1873 and providing impetus for the policy’s official adoption in Great Britain.

England suffered an incipient crisis in 1878 and one last brief but shallow crisis in 1890 (the Barings Crisis) which was only a blip on the radar compared to the Great Crises of 1825, 1837, and even 1857. Both emergencies were quickly stemmed by Bank of England liquidity loans.

Further strengthening the industry were the continued expansions and mergers of small country banks into stronger, widely branched and highly diversified national banks—a trend that had begun with the Banking Copartnership Act of 1826.

In 1900 25% of all U.K. deposits were controlled by the emergent “Big Five” banks including Barclays, Lloyds, Midland, and National Provincial. The Big Five’s market share grew to 40% by World War I (Turner).

Combined with an effective lender of last resort policy, England successfully avoided panics for 118 years following the Barings Crisis and its banking system even weathered the Great Depression without a crisis.

So what lessons do we learn from the English banking experience of 1694-1890?

Far from unregulated laissez-faire, English banking was beset by a government-granted monopoly, perverse regulations, and legal restrictions on bank expansion for well over a century—regulations that were the root cause of the nation’s multiple financial crises.

At first private banks were kept small by Parliament’s Six Partner Rule, tying their hands, making them unable either to widely branch or diversify their loan portfolios and deposit bases, and excluding the most competent businessmen from entering banking.

But even as Six Partner Rule restrictions were relaxed, the central bank was granted an absolute banknote monopoly and assumed an indomitable role in the issuance of national credit. This artificially imposed pre-eminence led to a single institution’s credit policy expanding and contracting money and lending across the entire country, amplifying the boom-bust cycle.

All these dysfunctional, counterproductive regulations were imposed on the private sector for the first 126 years for the benefit of the British government itself—providing it with a reliable banker and compulsory credit line that would never be diminished by competing upstarts.

The Bank of England and its directors would also continue to benefit from the monopoly and suppression of competition for another century-plus, profiting from its close relationship with government benefactors in a prime example of mercantilism—or what so many of us today refer to as “crony capitalism.”

The central bank was nationalized in 1946 and instead of enriching private shareholders its operating profits were transferred to the British government, just as the U.S. Federal Reserve diverts its earnings after member bank dividends to the U.S. Treasury today.

Later on the English experience teaches us that even the destabilizing effects of the monopoly central bank’s machinations can still be reasonably contained provided that:

-Its directors are competent, apolitical, and act honestly.

-It acts quickly as lender of last resort to mitigate crises of its own creation.

-The private banking system is allowed to freely operate branch networks and conduct its own lending policies with minimal interference from government.

-The private banking system is allowed to reap the profits or losses of its policies, free from government privileges, guarantees, bailouts, and regulations that introduce moral hazard or otherwise distort market incentives.

Such an arrangement was Walter Bagehot’s next best blueprint for stability—second only to dissolving the central bank itself—and the formula promoted soundness in English banking for 118 years, even when Great Britain abandoned the gold standard in 1931.

Unfortunately in today’s era of fiat money, zero and subzero interest rates, “Greenspan puts,” “Too Big to Fail” doctrines, mortgage-hoarding and repackaging GSE’s, and Parliaments and Congresses commanding banks to lower lending standards for the benefit of special interest groups and uncreditworthy homebuyers, Bagehot’s rule can no longer stave off panic as the United Kingdom painfully learned during the 2008 global financial crisis.

In upcoming chapters we’ll examine the parallel history of Scotland, England’s northern neighbor that allowed the closest to a laissez-faire, unregulated banking system the post-Renaissance world has ever seen.

With no central bank and no restrictions on shareholders, branching, note issuance, liability, or geographic scale, Scotland experienced not a single banking crisis during its “free banking” era of 1716-1845 while its larger neighbor to the south was crippled again and again by repeated waves of financial turmoil.