"How the Hell Can You Stand to Live in San Francisco?" Part 7

7 MIN READ - The Cautious Optimism Correspondent for Economic Affairs and Other Egghead Stuff concludes his series on how to survive in the People’s Republic of San Francisco. Although there’s no shortage of small nuisances to discuss like militant bicyclists, road-blocking protests, and overall crazy people we’ll wrap it up with the BART transit system and San Francisco’s (now) $16.32-per-hour minimum wage. 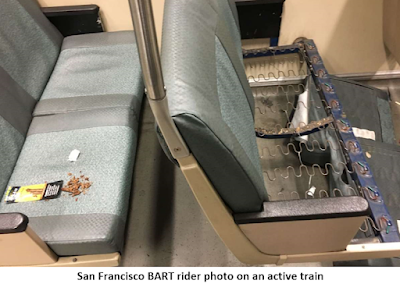 As we discussed in the last column, San Francisco’s Muni bus system is a subpar, filthy, prohibitively expensive public transportation system that has bled red ink for decades and is forecast to lose billions in coming years.

Well the Bay Area Rapid Transit system (BART)—an elevated rail and subway system—is Muni’s equally dysfunctional twin brother. The only difference is it extends outside of San Francisco throughout most of the Bay Area.

Once again let's just establish from the beginning that I have a car and a garage, and unlike many bedroom community commuters I live in San Francisco itself and have little need to take BART. So although I've seen many of the shambles you'll soon read about, I don't have to cope with them on any regular basis.

BART loses hundreds of millions of dollars each year. In FY2019 BART’s operating expenses were $922 million on ticket and parking revenues of $561 million, the $361 million hole being filled by the hapless taxpayer.

Its unionized janitors routinely make close to $100,000 (one janitor made $276,000 in a single year and was caught by the local TV news sleeping for hours on end in a storage closet)…

…its managers are famous for $300,000+ salaries, BART police lieutenants—unpleasant as their jobs can be sometimes—routinely make over $250,000, and nearly all BART employees are notoriously apathetic, rude, and treat customers as a nuisance.

But what concerns riders even more is that BART trains and stations are filthy.

Investigators have found all kinds of nasty bacteria linked to human feces on its seats as well as used syringes.

From KTVU News via Yahoo!:

“tests of the seats on BART revealed fecal and skin borne bacteria that were also resistant to antibiotics.”

BART stations have famously been filmed with drug addicts lining the hallways with needles in their arms.

Moreover, in 2012 a major downtown BART station’s escalators were temporarily shut down when they stopped working. Mechanics discovered the escalator machinery underneath the steps had been jammed up by months of dried human feces.

Evidently the homeless found moving escalators a convenient place to relieve themselves and liked that the teeth at the bottom of the escalator ground up their feces, acting as a sort of a makeshift “flush.”

And what does this all mean for BART fares?

They’re irrationally expensive. A BART fare is usually higher than the gasoline + wear and tear cost of driving a car from any one point on the network to any other point. Add to that either the BART fee for parking a car at their suburban stations or add another passenger to your car and the BART cost premium really goes up.

There’s something wrong with a “mass transit” system that costs far more to ride than simply driving a car to the same destination.

However BART still holds one advantage due to outrageous bridge tolls that keep cars artificially uncompetitive. And for those riders simply commuting into downtown San Francisco the market phenomenon of very expensive parking still makes BART a cheaper proposition.

San Francisco is hardly the only large, coastal blue city with overpriced and lousy rail service, but a contrasting system in a better-run large city is illustrative.

Now your Economics Correspondent has been to Hong Kong many times, and his uncle actually leased out much of the heavy equipment used to dig its MTR underground rail line during the 1970’s.

Today an MTR ride from Hong Kong’s own “embarcadero” station at Tsim Sha Tsui in Kowloon to Mong Kok station is also three stations down albeit a little further distance: 1.4 miles.

Now I can already hear the objections: “Hong Kong has a great deal more ridership so it can afford to charge less.”

That’s true. But more ridership is also a function of lower fares. If fares are driven sky-high by inefficiency and insane labor costs as they are with BART, demand declines and rider traffic falls. If fares and costs are lowered to rational levels, more people buy tickets.

Ridership is also a function of cleanliness. Unlike BART Hong Kong’s MTR is clean and has very frequent service and in-car video monitors.

Hong Kong MTR trains report 99.9% on time ratings, quarter after quarter. This includes before the PRC exerted greater control over the city in 2019 (ie. the numbers can be trusted).

Unlike BART MTR underground stations have glass barrier doors to prevent riders from falling onto the tracks, and also unlike BART its cars’ climate control systems work reliably.

In the Hong Kong “suburbs” MTR stations are more like mini-shopping malls.

In fact, the MTR system is a dynamic economic model that also involves building new high rise housing and shopping complexes close to subway stations. But that would be impossible in San Francisco since, as we’ve already discussed in Part 2, Bay Area city governments have banned most new housing construction for decades.

The Hong Kong government used to wholly own MTR Corporation at its beginning, but in 2000 it was partially privatized via IPO. The government still owns a majority stake but is generally a passive shareholder, allowing the system to operate as a for-profit enterprise.

And profits it makes. Typically over $1 billion USD a year ($1.5 billion net income in 2019), a great deal of which is channeled to the Hong Kong government as majority shareholder, and which helps keep Hong Kong’s overall tax rates low.

Imagine that. $2.10 for a three stop ticket on San Francisco BART and the system still drains hundreds of millions of dollars a year from the taxpayer. 65 cents on MTR and profitable enough to give the taxpayer a break.

In the Economics Correspondent’s opinion, MTR’s private, for-profit status is what makes it a success—run by businessmen trying to appeal to consumer preferences, not left-wing bureaucrats appealing to government union workers and their own pensions.

Here’s a two-minute video with images of MTR and an explanation of its innovative model (that will never be tried in California).

And here we wrap it up with, believe it or not, the one crazy San Francisco government policy that has impacted me more than any of the others listed in all seven of the columns I’ve written on this subject: the minimum wage.

In late 2014 San Francisco government, envious that Seattle had beat them to the punch passing a $15 minimum wage, placed Proposition J on the ballot. If passed by the voters, minimum wage would increase on July 1, 2015 from $10.74 to $12.25.

Beyond 2018 it would increase every year “based on inflation.”

As one might expect, this harmed many retail businesses and the most visible aspect was restaurant closures. Each year’s July wage increase was followed by a round of restaurant employee firings, reduction of hours, or more commonly shuttering of the businesses entirely.

There was also a local Panera Bread whose prices went up like clockwork every July. Within two years the front lobby had eight new electronic kiosks and no one working cashiers unless you called for help.

The next year no one even advised you your order was ready. You just watched a computer screen for your number to come up and walked to the kitchen window to find your plate waiting for you.

And a year later the restaurant was shuttered and gone. The commercial space remains empty today as do many others that once housed popular restaurants.

Of course all along local Fight for $15 proponents staunchly denied raising the minimum wage would result in layoffs or restaurant failures. But it became hard to deny when in 2018 and 2019 the local San Francisco Chronicle reported on a “shocking” number of restaurant closures, “including restaurants that served their communities for decades, in many cases.”

As the minimum wage continued to rise relentlessly even into 2019 the Chronicle reported on 400 closures in that year alone and even cited minimum wage as a major reason.

To which the local Fight for $15 proponents changed their tune from “It won’t close any restaurants and won’t harm workers” to “Well if your business model is based on exploitation then you deserve to be shut down.”

Sympathy for the workers sure disappeared quickly, displaced by activists' belief that they have the unilateral right to destroy any business they feel isn’t paying workers enough, even if the restaurant and the worker have mutually agreed to accept the wage.

Well as a late-night diner the reduction of hours and disappearance of restaurants has had a greater negative impact on me personally than any of the other lousy San Francisco policies: more than skyrocketing home prices and apartment rents, more than homelessness, more than power blackouts, more than high gas prices, bridge tolls, my taxes that haven’t yet gone up, shoplifting, or anti-Trump protests.

And I’m sure those restaurant workers and restaurant owners who have been deprived of their livelihood feel the same way.