7 MIN READ - The Cautious Optimism Correspondent for Economic Affairs and Other Egghead Stuff continues with his analysis of Canada’s remarkably stable 205 years of commercial banking. This time we examine the greatest single reason for its success: U.S. regulations that Canadians never adopted. 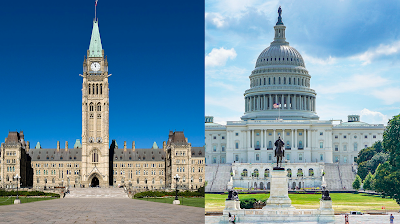 TOO BIG TO FAIL?

Consolidation of market share into a few large banks has been a hallmark of the Canadian banking industry for over 140 years (more on why in the next column).

Today Canada’s banking sector is dominated by the “Big Five” of RBC, Toronto-Dominion, Scotiabank, Bank of Montreal, and CIBC who collectively control over 80% of the country’s banking assets.

That’s far more concentration than the USA’s “Big Four” of J.P. Morgan, Bank of America, Citigroup, and Wells Fargo who control closer to 45%.

Yet politicians tell us “too big to fail” is an unacceptable risk to the U.S. banking system – just tempting another financial crisis shoe to drop – and that large American banks simply must be broken up for the good of the country.

But Canada has had “much too bigger to fail” for over a century and never experienced a banking panic, including for the last 65 years of its largely deregulated “free banking era” (1870-1935) when the industry was also highly concentrated.

How on the one hand can politicians say America’s few large banks are a recipe for disaster while the far more concentrated banking industry of Canada has never experienced a single financial crisis?

The answer is Canada’s lack of onerous, perverse, and I shall include “dumb” regulations that have plagued the United States since its founding.

Market share, concentration, and deregulation have never been the problem in the United States; bad regulations have.

The first, which we’ve touched on previously, is unit banking.

During the 19th and early 20th centuries most American state governments legally prohibited their banks from branching, leaving the country dotted with thousands of tiny banks that were often just single buildings in a town or countryside acting as localized government-created monopolies.

Unit banking made it impossible for American banks to diversify their loan portfolios, diversify their depositors, move capital from one region of the country to another, equalize interstate interest rates, or cooperate during times of financial stress.

But Canada never had any branching restrictions and its banks rapidly spread across the country. Once Canadian banking had matured shortly after Confederation (1867) most Canadian banks were large, well-capitalized, and competing fiercely in nearly every township.

Around that same time Canada had roughly twenty large banks, each well-capitalized with several hundred branches, a few dozen more thrifts, and even a handful of credit unions. Even the average tiny township of 900 people in western provinces like Alberta or Saskatchewan averaged two branches from competing banks—more than most Americans got.

Note: If twenty banks doesn’t sound like many, keep in mind that in 1914 Canada’s population was about 8 million or roughly the size of Oregon. If twenty banks and several dozen thrifts, all competing in every city and town in Oregon with even tiny townships of 900 people getting two bank branches, sounds competitive enough it’s because it was. Twenty Canadian banks free to go anywhere was also a far more competitive system than America’s 27,000 mostly local monopoly unit banks.

This fatal flaw in the U.S. system had long been recognized by Canadian bankers. Canadian Bank of Commerce superintendent E.L Patterson wrote in 1917 that:

“Practically every country in the world except the United States has recognized the utility, if not the absolute necessity, of the branch system of banking in handling commodities as liquid as money or credit. A bank system without branches is on par with a city without waterworks or a country without a railroad so far as an equable distribution of credit is concerned.”

One more point about branches: During the Great Depression nearly 10,000 American banks failed in the years 1929 to 1933.

The Federal Reserve System played a large role in the American banking disaster, but so did unit banking. Well over 90% of American banks were still unbranched in the 1930’s, leaving their loan portfolios completely undiversified and vulnerable to failure with the downturn of a single crop, local factory, or the local economy.

While over 90% of U.S. banks had zero branches, Canada—which by 1930 had grown to 10 million people, about the population of North Carolina—employed large branch networks:

Note: The Economics Correspondent could not find Great Depression-era branch counts for the Bank of Toronto and Dominion Bank, only that the former had 161 branches by 1920—still far more than 99% of American banks had in the 1930’s or even by the 1950’s.

In most respects Canada was hit harder by the Great Depression than the United States. Yet Canada’s banking system—with no central bank until 1935 and no deposit insurance until 1967, but unhampered by onerous regulations and allowed to diversify assets, deposits, and customers—held  up.

In fact during the global crisis years of the early 1930’s, the freest, most unregulated banking system in the industrialized world also proved the best-performing and most resilient.

For half a century after the Civil War (1863-1913) American banks were governed by another set of pernicious regulations, this time from Washington, DC: the National Banking Acts.

The National Banking System’s regulations were many and gruesome, but a simplified explanation is its rules made it illegal for commercial banks to issue paper currency unless they secured their note issuances by U.S. government bonds.

This may not have been so problematic if not for the fact that after the Civil War government bonds began to disappear as the federal debt was paid down, so the law in effect made it illegal to issue paper currency at a time when commercial banks were the country’s only source of paper currency.

One can imagine the havoc wreaked upon a rapidly growing economy when its banks aren’t allowed to provide cash, and the problem frequently manifested itself as a credit crunch during fall harvest season.

When farmers asked banks to convert some of their bank account balances to cash to pay hired hands, banks were forced by regulation to say no. Thus farmers withdrew gold coin (ie. bank reserves in the days of the gold standard) forcing banks to contract credit and raise interest rates. This system produced major banking panics in 1873, 1893, and 1907 with incipient panics in 1884, 1890, and 1896.

By the early 20th century proponents of central banking were accusing the private banking system of failing the country due to an “inelastic currency.”

But in fact it was bad regulations that made the currency inelastic.

Across the border the deregulated Canadian banks were free to issue currency without any government bond holding requirement (more detail on that in the next chapter). So during the 50-year U.S. National Banking Era Canadian banks operated crisis-free while America endured a crisis roughly every seven years.

Modern day Fed apologists make similar claims about the Gilded Age’s banking failures: that before the Federal Reserve’s establishment the country experienced frequent shortages of cash and repeated banking panics that finally ended when the Fed came along to fix things.

(that’s actually false, the panics got even worse for the first quarter-century after the Fed’s establishment)

Of course, Fed officials and their allies say nothing about the regulations that caused the pre-Fed cash shortages and panics to begin with, leaving it to the reader to fill in the blanks with assumptions that it must have been laissez-faire’s fault or yet another “market failure.”

If only the market had really been allowed to work, America would have avoided many of the NBS-era panics although unit banking was still a lingering problem.

For those who wish to know more gory details about the backwards National Banking System, you can go to:

There is one regulatory exception in the modern era: central banks.

Canada had no central bank until 1935.

The American BUS and SBUS both engaged in cheap money policies that inflated national asset bubbles (one in Treasury securities, one in land and transportation companies, and another in land and stocks) which burst and launched the Panics of 1792, 1797, and 1819.

Later the Federal Reserve System deliberately inflated the asset bubbles of the late Roaring Twenties leading to the Recession of 1929. The Fed then transformed that recession into the Great Depression in the early 1930’s.

In Canada there was no central bank at all during its free banking era of 1817-1935.

Modern day left-leaning economists tell us without a central bank a country’s financial system will be vulnerable to shocks and powerless to prevent frequent and devastating banking crises. Yet the experience of Canada proved the precise opposite: no central bank corresponded to no crises, while the USA’s experience also proved the precise opposite: central banks corresponded to (indeed caused) many crises.

The same dichotomy existed in 18th and 19th century Great Britain. The Bank of England monopoly produced seventeen banking crises in two centuries. Scotland, with no central bank, suffered no crises during its 129 years of free banking.

Even after the establishment of the Bank of Canada in 1935, Canada has still avoided any bank panics for 87 years up to present day. And the Economics Correspondent will explain the reasons behind Canadian banking’s exceptional performance—even with a monopoly central bank—in an upcoming column.
_______

The 1930's Federal Reserve fails to expand the monetary base
http://www.cautiouseconomics.com/2019/02/the-great-depression-04b.html