An undergraduate level macroeconomics reminder to Treasury Secretary Janet Yellen from the Cautious Optimism Correspondent for Economic Affairs and Other Egghead Stuff. 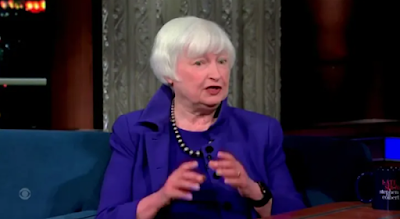 As some CO Rockers may have already read Janet Yellen recently blamed consumer “splurging” for the same price inflation she insisted was transitory and would go away by itself in 2021.

From her recent Colbert Show interview:

“They [Americans] were in their homes for a year or more, they wanted to buy grills and office furniture, they were working from home, they suddenly started splurging on goods, buying technology.”

Well the Economics Correspondent has two macroeconomic reminders for Yellen who, after all, chaired the Federal Reserve System from 2014 to 2018, served as Vice Chair from 2010 to 2014 and San Francisco Federal Reserve President from 2004 to 2010.

1) If consumer “spending” is to blame, why is government spending not also to blame? Absent from her scapegoats was any mention of the $3.5 trillion in deficit spending the White House and Democratically controlled Congress have "splurged" on since her boss took over just 22 months ago.

2) Since she earned her Yale economics Ph.D 51 years ago, she may have forgotten some undergraduate macroeconomics 101:

Spending in the aggregate, what economics call "aggregate demand," is defined as MV or (money supply) x (velocity).

If Yellen thinks Americans are spending too much, then either a rapidly growing money supply, rapidly rising velocity, or both necessarily must be fueling Americans' ability to overspend.

How have both changed since her boss entered the White House?

-After plunging nearly 20% in 2020, M2 velocity stabilized remarkably in 2021 and early 2022. From Joe Biden's inauguration to the day the Federal Reserve finally woke up and started tightening monetary policy (April 2022), M2 velocity has risen just 2.5%.

Actually Yellen already knows all this, which means she knows that if consumers are spending too much then it's the Fed’s 13.3% inflation of the money supply in 15 months that is really the culprit.

But blame the victim, not the perp. Blame the effect, not the cause.