7 MIN READ - The Cautious Optimism Correspondent for Economic Affairs and Other Egghead Stuff continues his series on American banking history with an analysis of the pivotal National Banking System of 1863-1914, a regime of federal codes and rules that inflicted sufficient pain and agony on the American financial system for the country to acquiesce to the adoption of the Federal Reserve System. 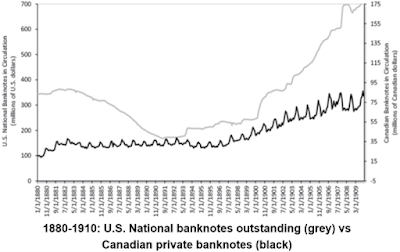 As everyone knows the U.S. Civil War broke out in 1861. After 25 years of federal non-intervention in banking the Union government found itself pitted against the Confederacy.

And just like the War of 1812, Washington DC found itself with an expensive conflict to pay for but no central bank to finance it.

Thus the Lincoln administration decided to fund the war effort in three ways: a new income tax (later struck down by the Supreme Court), the issuance of U.S. Treasury “greenback” paper notes, and an expansion of credit under the establishment of the National Banking System (NBS).

Greenbacks are an easy concept to grasp. In 1862 the Treasury simply began printing its own money. Green ink was used because black and white photography had newly arrived and the Treasury chose color ink to hinder counterfeiting.

Greenbacks were not redeemable in gold or silver, but the Treasury made a vague promise to do so at some unspecified date after war’s end, a promise that the federal government ultimately kept beginning in 1879. They were also declared legal tender, but several western states defied the mandate so greenbacks depreciated against gold and silver-backed money wherever the edict was challenged.

The National Banking System was somewhat more complicated, and its creation would drag the United States into a half century of larger, increasingly frequent, and more destructive banking panics.

In 1863 the federal government decided to create a parallel system for chartering national banks that would abide by federal rules.

Nationally chartered banks would issue uniform currency and each would be legally compelled to accept notes from every other.

But insidiously, and in a manner eerily similar to the previous “free banking” era of 1837-1862, national banks were only allowed to issue paper currency if backed 111% by U.S. government bonds.

Once again a government—this time the federal government—forced banks to lend generously to its treasury for the right to issue paper currency.

Surveying the National Banking System and all its restrictions, most banks said “no thank you” and remained state chartered.

So in 1864 Congress added more incentives to join the National System by slapping every state-chartered bank with a 10% tax against the face value of all banknotes issued, effectively taxing them out of existence. State banks were forced to either join the National Banking System (which most did) or give up their lucrative note-issuing operations and consolidate into banks of deposit only.

And the Economics Correspondent would like to remind readers that liberal economists and writers at America’s major newspapers refer to the last half of the 19th century’s banking industry as “deregulated” and “laissez-faire.”

As of 1864 America found itself with a radically different banking structure. All paper money was now issued exclusively by nationally chartered banks which were forced to hold one dollar in U.S. government bonds for every 90 cents of private currency they issued (111% backing).

Clearly this was a revenue measure to finance the Civil War and it worked for a while, performing far better than the Confederacy’s direct issuance of government “grayback” currency. While prices roughly doubled in the Union during the course of the war, the South was wrecked by hyperinflation.

However major problems began to appear after the war, problems that generated larger and more frequent financial crises than any time before.

In the years after the war successive Republican administrations frequently ran fiscal budget surpluses and (brace yourselves for a shock) steadily paid down the national war debt.

But the National Banking System regulations didn’t change. Banks were still required to back their currency 111% by U.S. government bonds, bonds that were disappearing as the Treasury retired them one after another.

So even as the U.S. economy boomed during the Gilded Age, the nation’s stock of cash was shrinking. For half a century outdated wartime regulations handtied banks’ ability to issue cash in a rapidly growing economy, and the scarcity of banknotes increasingly translated into outright crisis when demand for cash rose—namely during harvest seasons.

When farmers paid hired hands to help with harvests, they needed cash (farm laborers didn’t have checking accounts in those days) and went to their local banks to convert some of their deposit balances to banknotes.

But in the late 1800’s many banks were legally forced to refuse their customers with  “I’m sorry, there aren’t enough federal bonds available for me to issue notes. I’m not allowed to give you any cash.”

Given that farmers had to pay their hired hands with some tangible hand-to-hand instrument, they demanded the only other option available to them and withdrew gold coin.

Thus, when gold was withdrawn from the banking system in large amounts, banks lost reserves and were forced to contract credit. They abruptly stopped lending, they called in loans, and interest rates surged.

Further illustrating this mechanism, the Economics Correspondent recently read a 1965 biography on the life of J.P. Morgan describing the famous Panic of 1907. Of the Panic the author wrote:

“It was the usual problem: the shortage of cash in the marketplace with the Western harvests in progress and much cash needed.”

The author didn’t explain in detail why there were frequent shortages of cash, but now CO Nation knows: the bondholding requirement mandated by the National Banking System which in turn provided the primary regulatory trigger that destabilized the financial system.

All it took was a slightly disruptive event to occur anywhere in the world and, combined with NBS-inspired gold withdrawals, the U.S. found itself in full blown panic—again and again.

THE UNITED STATES VS CANADA

The Economics Correspondent has provided a visual aid (attached) that illustrates the regulatory kneecapping of American banks’ ability to issue paper currency.

In the chart we see the quantity of banknotes circulating—not the entire money supply, just the cash component—in both the regulated United States and much more deregulated Canada.

The American line is smooth and steadily declining for the first dozen years or so. The jagged, sawtooth Canadian line steadily rises for three decades.

USA: Already we see one major problem in the U.S. graph. Currency is falling by nearly 50% during the most rapid period of economic growth in the nation’s history, a completely upside-down correlation that was forced upon the country by the Treasury bond deposit mandates of the National Banking System.

By the early 1890’s Congress recognized there was a problem and issued more bonds, but it wasn’t enough as banknotes outstanding only increased by 100% from 1880 to 1910 whereas nominal GDP grew by 223% in the same period.

CANADA: The Canadian supply of banknotes rises and falls in a sawtooth pattern reflecting seasonal demands for cash. Banknotes in circulation expands reliably every fall and declines by winter as paid hands spend their cash, merchants deposit the cash back into the banking system, and notes are converted back into deposit balances.

Unlike the United States, the deregulated Canadian banks were allowed to accommodate the market’s seasonal demands for cash. American cash balances were held rigid and inflexible by National Banking System rules.

Hence during the Gilded Age while the United States suffered from at least six banking panics, three of them enormous, Canada experienced none.

The American graph reflects the so-called "inelastic currency" that modern-day economists accuse the pre-Fed banking system of, and hail the newly formed Federal Reserve System for fixing. They're correct to call the pre-Fed currency inelastic, but what they nearly always fail to mention is the inelasticity was imposed completely by federal banking regulations that the Federal Reserve was not bound to.

A final note: As monetary economist George Selgin has pointed out, if you show the Canadian graph to today’s typical liberal or Keynesian economist they will likely applaud “Look at banks issuing cash in accordance with the seasonal demands of the economy!”

Followed by: “What omniscient central banker was managing currency so effectively all those years?”

Canada didn’t have a central bank until 1935. In fact, with a few small exceptions Canada imposed virtually no regulations on its banks at all.

From 1845 to 1935 Canada possessed the industrialized world’s most deregulated banking system, one that would horrify today’s Keynesians who would howl "laissez-faire” were anyone to suggest resurrecting it today.

But the “omniscient central banker” of 19th century Canada was in fact the free market: every private bank satisfying the cash demands of its customers, unimpeded by the perverse government regulations that afflicted the United States.

Stay tuned for Part 2 where we’ll discuss even more crisis-breeding provisions of the National Banking System and the decision to seek resolution with the Federal Reserve.