Free vs Regulated Banking: The First Bank of the United States and the Panic of 1792 (Part 3 of 4)

7 MIN READ - The Cautious Optimism Correspondent for Economic Affairs and Other Egghead Stuff continues with the history of America’s heavily regulated and very crisis-prone banking system, this time examining how its first central bank—the Bank of the United States—precipitated the young nation’s first financial crisis: the Panic of 1792. 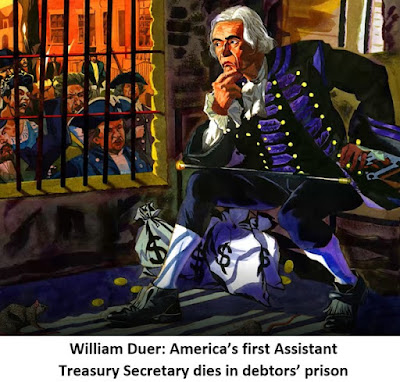 As we discussed in a previous column, America’s first Treasury Secretary Alexander Hamilton was a huge admirer of the British mercantilist economic system and wished to recreate it in the new United States.

After a fierce debate with Thomas Jefferson over the constitutionality of a government-connected central bank, Hamilton convinced President George Washington to sign a Congressional bill establishing the Bank of the United States (BUS) with a twenty-year charter.

Although Hamilton was Secretary of the Treasury, he unofficially ran the BUS out of its Philadelphia headquarters which was also the U.S. capital at the time—the equivalent of one man today serving both as Treasury Secretary and Federal Reserve Chairman.

In 1791 the BUS raised $10 million in a stock subscription, a huge sum at the time, and loaned out a multiple of its paid-in capital as BUS banknotes and deposits, its notes redeemable on demand in gold and silver coin (ie. specie).

Although Hamilton preferred for the BUS to lend directly to the Treasury, Congress was still very suspicious of the central bank’s capacity to directly monetize government debt. Many legislators remembered their own experiences fighting a British army funded by Bank of England lending to Parliament, and they cautiously inserted a clause in the BUS charter prohibiting it from buying U.S. Treasury securities outright.

Nevertheless, Hamilton quickly employed methods to use the Bank’s powers to support the national debt by indirect means.

However, the last three payments—totaling $300 of the $400 share price—were to be made with U.S. Treasury bonds that paid 6% interest.

Investors accordingly rushed to buy Treasuries, extending credit to the U.S. government, and bid bond prices up while the BUS subsequently stockpiled millions of dollars of government securities in its portfolio. The U.S. taxpayer was now financing the interest payments that funded the Bank’s profits.

Hamilton also used the BUS to lend heavily, mostly to his friends and contacts in the financial circles of New York, Philadelphia, and Boston. As we learned in Part 1, the new money Hamilton’s BUS created inflated the money supply measured by M1 by anywhere from 20% (Friedman/Schwartz) to 33% (Rousseau/Sylla) from 1791 to 1792.

But most importantly, Hamilton loaned selectively to financier friends who pledged to invest the proceeds into more U.S. Treasury securities. The entire BUS credit strategy supported Hamilton’s scheme to finance a large national debt, establish the new country’s credit, and provide the need for federal taxation.

“A national debt if it is not excessive will be to us a national blessing; it will be powerful cement of our union. It will also create a necessity for keeping up taxation to a degree which without being oppressive, will be a spur to industry.”

Hamilton’s plan to steer private investment into government borrowing was not a surprise to everyone. As previously mentioned, many of Hamilton’s financial contacts in the large cities borrowed from the BUS on the condition they invest the loans in the national debt.

Duer was an attorney, speculator, and member of the first New York Legislature and the Continental Congress. Through his friendship and a Hamilton family connection he was appointed America’s first Assistant Treasury Secretary in late 1789.

Upon learning of Hamilton’s plans for the national bank to create a market for federal government debt Duer devised a plan to profit from his inside information. However, he was discovered trading in federal bonds (prohibited by Congress) and attempting to sell land in the American Northwest Territory that he technically didn't own. Duer was subsequently sued by the federal government, resigned in scandal and moved back to New York.

In New York he partnered with Alexander Macomb, a landowner and speculator rumored to be the wealthiest man in New York State. Still wise to Hamilton's plan, the two borrowed every dollar they could find—from banks, merchants, widows, family members and friends—investing in U.S. Treasuries as well as shares of the Bank of New York (a private bank founded by Alexander Hamilton in 1784).

Other financiers joined in the frenzy forming a clique known as the “Six Percent Club,” named such because U.S. bonds paid 6% interest. Armed with the knowledge of the BUS’s plan to divert vast sums of money into Treasuries they hoped to profit from their privileged information and even attempted to corner the entire government bond market.

Needless to say this policy of deliberately shoehorning newly created BUS money into federal debt sent government bond prices soaring: from an index of 25 at the founding of the BUS to 129 by March of 1792. Shares of the BUS itself rose from an index of 530 in August 1791 to 712 by January 1792.

Unfortunately for the financial system Hamilton’s knowledge of monetary economics left much to be desired, and by the spring of 1792 redemption of the BUS’s vast issuance of banknotes was draining its gold and silver reserves at an alarming rate.

Hamilton had loaned too much, too fast and issued too much paper money, inflating not only a sovereign debt and stock market bubble, but also outpacing the BUS’s capacity to fulfill its redemption calls.

In just three months from December 1791 to March 1792 the BUS’s metallic reserves plummeted by a precarious 34% and Hamilton quickly contracted credit. He refused to renew short term loans and rapidly choked off the growth of the money supply, pricking America’s first securities bubble.

As Treasury and stock prices collapsed, the problem was further compounded by the BUS’s sudden refusal to lend to businesses. Firms that had relied on revolving lines of credit from the BUS found the lending window promptly closed and were forced to sell what securities they held to raise cash, further adding downward pressure on bond prices.

With America in the throes of its first financial crisis, Hamilton rushed to establish a federal emergency “sinking fund”—headed by himself, Vice President John Adams, Secretary of State Thomas Jefferson, Attorney General Edmund Randolph, and Chief Justice John Jay—to buy back $100,000 in government bonds in a bid to force prices back up.

Jefferson, who had warned of the dangers of establishing the BUS just a year prior, was the only dissenting vote.

Hamilton also convinced the Bank of New York to engage in $150,000 of open market purchases and he guaranteed additional emergency lending support by the private Bank of Maryland.

All the bailout loans, guarantees, and combined government/private open market purchases support worked. The panic was mitigated and the country suffered only a mild recession, most of the pain being felt in the financial sector.

If Hamilton’s emergency lending and open market purchases facilities sound familiar, it’s because he employed methods similar to those of the Federal Reserve during the 2008 financial crisis. It should come as no surprise then that modern day central bankers praise Hamilton for pioneering the rapid rescue of banks from the ravages of a major crisis.

What they rarely mention in their praise is that it was Hamilton and his central bank that created the crisis in the first place, much as we hear praise heaped upon the Federal Reserve for mitigating the 2008 Great Financial Crisis without mentioning the Fed’s role in starting it.

Hence when the idea of removing Hamilton’s portrait from the U.S. ten-dollar bill was floated in 2015, former Federal Reserve Chairman Ben Bernanke rushed to his defense, arguing:

“Hamilton was without doubt the best and most foresighted economic policymaker in U.S. history… …as Treasury Secretary Hamilton put in place the institutional basis for the modern U.S. economy. Critically, he helped put U.S. government finances on a sound footing, consolidating the debts of the states and setting up a strong federal fiscal system…”

“…Importantly, over the objections of Thomas Jefferson and James Madison, Hamilton also oversaw the chartering in 1791 of the First Bank of the United States, which was to serve as a central bank and would be a precursor of the Federal Reserve System… …As many have pointed out, a better solution is available: Replace Andrew Jackson, a man of many unattractive qualities and a poor president, on the twenty-dollar bill.”

Within a year of the recession the economy was growing again, but Hamilton evidently failed to learn lessons from the experience. He returned the BUS to even more spectacular lending and money creation again in 1793 leading to another runup of speculation and prices that collapsed in the much larger Panic and Depression of 1797.

Hamilton’s former Assistant Treasury Secretary William Duer, Alexander Macomb, and several members of the Six Percent Club were bankrupted by the Panic of 1792. Duer’s losses are estimated at an astounding $3 million, four-fifths the entire federal government’s revenues in 1792.