4 MIN READ - The Cautious Optimism Correspondent for Economic Affairs and Other Egghead Stuff provides an exclusive analysis of where the Fed currently stands in its battle against the inflation of its own creation.

(The Economics Correspondent makes no claims to be inside Fed Chair Jerome Powell’s head and the opinions here are strictly his own, but he believes future Fed policy moves will confirm his commentary)

So the Federal Open Market Committee just announced another rate hike in December, this time up fifty basis points to an effective Fed Funds rate of 4.25%-4.50%.

Government reports indicate inflation is moderating, albeit still too high. Year-over-year numbers still hover around seven percent but the more recent month-to-month numbers have been coming down.

So why is the Fed still hiking and increasing the risks of creating a recession?

In the Economics Correspondent’s opinion, the Fed has good reason to still be worried about inflation and, after falling asleep at the wheel and pumping way too much money into the economy even after the Covid-reopening recovery was underway, is now exercising the best of all the bad options it has boxed itself into.

As you can see from the attached St. Louis Federal Reserve charts (below), contrary to popular belief, the last six months of rapid rate hikes *have* been effective at restraining the rate of monetary growth—even reducing it. 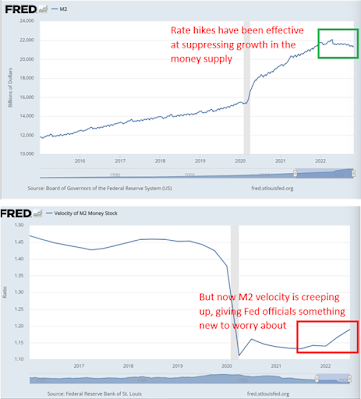 So if money is contracting, why aren’t prices falling?

Because of what the Fed has been worried about for the last six months: the prospects of engrained inflation expectations taking hold.

There are signs that the expectation of future inflation is driving consumers and businesses to move their purchases forward and spend their money faster.

It's not guaranteed yet, but the indicators are currently moving in the wrong direction.

The rate of inflation is a function not only of money and real goods and services, but also of monetary velocity or the rate at which dollars are spent.

And the more Americans fear that inflation might be here to stay the faster they spend their money, raising velocity and creating persistent inflation—even if the Fed gets money supply growth under control.

As you can see from the M2 velocity chart, velocity collapsed during the 2020 lockdowns, stayed relatively flat for the next two years, and has insidiously started creeping up the last two quarters.

If that rate of increase were to persist compounded, velocity alone would produce 9% annual inflation ***even if the Fed held the money supply flat***.

More economic growth—or more goods and services being chased by the same number of dollars—could help offset higher velocity, but an economy the size of the United States simply isn’t going to grow real GDP by 9% a year or even 7% to bring inflation down to the Fed’s 2% target.

And even worse, more and more economists are forecasting recession—ie. negative growth—in 2023 so 7% growth in goods and services won’t be coming to the rescue.

This is the quandary that the Fed has created for itself—with Americans paying the price for their mistake.

The Fed keeping rates too low, and the growth of money too high, both for too long—particularly when the reasons for aggressive loosening had long passed and the economy was back in post-lockdown growth mode—created the highest inflation in forty years. Now Fed officials are worried that inflation is metastasizing into a new, more insidious phase that was also last observed in the 1970’s and early 1980’s.

And that’s why the Fed continues to keep the brakes slammed hard despite an actual decrease in the money supply over the last six months.

The Economics Correspondent believes a recession is now inevitable. Therefore so long as we're destined to eat a slump regardless the least the Fed can do is flatten monetary velocity to make the recession worth the price: by killing inflation for good. The last thing we need is the Fed to not only create a recession, but fail to kill inflation which was the reason it tolerated creating a recession in the first place.

Addendum: On top of all these problems, higher rates are forcing the Fed to pay more and more to banks to stop them from lending the $3 trillion in reserves they currently hold—reserves the Fed rapidly created during the unprecedented Covid-era quantitative easing.

Higher interest payments on reserves wouldn’t be so much a problem if the Fed had not ballooned its balance sheet from $3.5 trillion in late 2019 to $8.5 trillion by mid-2022.

So now the FOMC is scrambling to reduce its balance sheet (ie. drain the banks of excess reserves) so that, although it still has to pay banks a higher rate, it can do so on a smaller reserve base.

Unfortunately they pushed the monetary base up so high that it’s going to take more time to shrink it back down, and at the current $3 trillion level of system reserves the Fed is now paying an annualized rate of $130+ billion in risk-free, zero maturity interest to America’s banks (4.40% x $3 trillion, see chart). 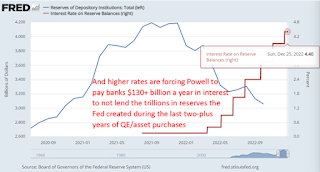 But don’t blame J.P. Morgan and Bank of America. The fault lies with the one actor and one actor only which uses its Congressionally-bestowed monopoly power to manipulate system reserves, asset prices, and market conditions in general: the Fed.