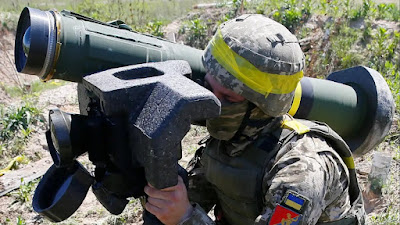 The Cautious Optimism Correspondent for Left Coast Affairs and Other Inexplicable Phenomena has discovered evidence that former President Trump was a “puppet of Putin” who handed Ukraine to Moscow on a silver platter and weakened the beleaguered country's ability to defend itself.

Moreover the Correspondent has unearthed proof supporting recent theories that Putin invaded the Crimea and Ukraine because he feared the resoluteness of former President Barack Obama and current President Joe Biden to strengthen Ukraine’s military capacity.

Thank goodness for the overseas press.

From this week’s Nikkei Asia, a subsidiary of Nikkei Inc, owner of the Financial Times:

“During President Barack Obama's term in office, the U.S. did not supply Ukraine with Javelins when Russia annexed Crimea in 2014. But under President Donald Trump, Washington reversed course and decided to equip Ukraine with the weapons…”

“…Despite fielding a smaller army, Ukrainian forces have put up a tougher response than anticipated to Russia's invasion thanks in no small part to the multitude of Javelin missiles provided by Western nations.”

“Measuring 1.2 meters in length, the Javelin can be transported and fired by a single soldier. Yet the weapon, made by American contractors Lockheed Martin and Raytheon, has enough firepower to pierce tank armor from 2.5 km away.”

“The traits have made the Javelin the weapon of choice for repelling tank invasions in urban settings. A Javelin operator can covertly approach and engage a target in that setting. The weapons could prove even more crucial as a 65 km long tank convoy moved its way toward Kyiv on Tuesday…”

“…In Ukraine, an image of a religious icon holding a Javelin launcher -- dubbed "St. Javelin" -- is circulating on social media. The depiction has come to symbolize the resistance.”