From the Cautious Optimism Correspondent for Economic Affairs and Other Egghead Stuff: Britain first to employ common sense. 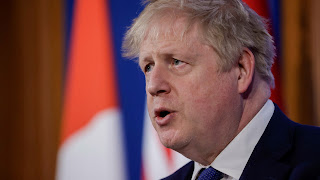 Is the United States capable of mimicking now that we've seen somebody else announce a logical plan?

And for the progressive Democrats I've seen the last week on television complaining "We need to pressure Putin out of Ukraine now. Building more pipelines and fossil fuels capacity takes too much time."

Sanctions take time too. It took years of sanctions to force South Africa and Myanmar to change course. Sanctions were placed on Iran and Iraq for years with no effect on their governments' policies. Why then are woke activists all for slow-drip sanctions but complaining our own oil and natural gas resources take too long?

Elizabeth Warren, Bernie Sanders, and AOC have also said the invasion of Ukraine underscores why we need to free America from fossil fuels with renewables.

Well running America on windmills and solar panels is going to take even longer, a lot longer, than ramping up new oil and gas production since renewables remain prohibitively expensive and unreliable. Why are they promoting snail's pace Green New Deal utopias and not American oil to replace Russian oil?

Incidentally if they ever worked a day in the energy business they'd know ramping up onshore drilling and production rigs is a very fast, and flexible process—faster than employing floating offshore rigs in the harsh North Sea environment—especially when unburdened by additional federal regulations and red tape.