Free vs Regulated Banking: The First Bank of the United States (Part 1 of 4)

5 MIN READ - The Cautious Optimism Correspondent for Economic Affairs and Other Egghead Stuff had originally suspended his American banking history entries until news from Ukraine wound down, but given the continuing conflict after three weeks has decided to resume the series. Perhaps a little American history will be a welcome diversion from the constant barrage of Ukraine coverage. 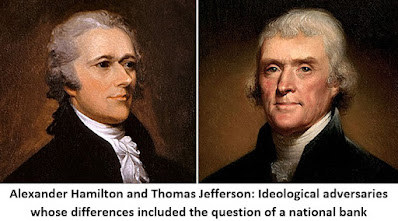 So unit bank laws were pretty much the extent of government’s regulatory interference in our nation’s banking system, right?

No way. We haven’t even gotten warmed up.

These two powerful institutions were themselves directly responsible for precipitating multiple financial crises.

I. THE ORIGINS OF THE FIRST BANK OF THE UNITED STATES

(Note: The Economics Correspondent is aware of Robert Morris’ short-lived Bank of North America that operated under a privileged federal charter from 1782-1785 and which some consider to be the USA’s first central bank. However, this series of articles considers the question of central banking only once the United States established itself as a constitutional republic after the Constitution’s ratification in 1788)

George Washington had barely begun his job as America’s first president when a controversy erupted within his new cabinet. In a now-infamous debate Treasury Secretary Alexander Hamilton and Secretary of State Thomas Jefferson clashed over the question of establishing a government-connected central bank.

Alexander Hamilton, a brilliant polymath who was excellent on the issue of slavery (he was one of America’s first abolitionists), and correctly foresaw that America’s future lay in industry—not agriculture as Jefferson had predicted—had somewhat more dubious views on the subjects of government power and economics.

Hamilton was long an admirer of the English mercantilist system and wished to effectively recreate England’s economy in America, including the Bank of England, only without a king.

In lieu of a monarch Hamilton proposed that presidents and senators should serve for life at the 1787 Constitutional Convention. His motion obviously failed the ratification vote.

Hamilton’s economic outline proposed a large permanent national debt, a centralized federal taxing authority, and large government subsidies and protective tariffs for business, all based on the English system the colonies had just broken away from.

But the linchpin of his economic plan for America was the establishment of a national bank to act as the government’s banker and lender, and which would create credit for the new republic in the name of promoting commerce and industry.

It was nearly a mirror image of the Bank of England.

A historical anecdote sheds some light on the thinking behind Hamilton’s designs for the new country’s economy:

In a 1791 dinner attended by Hamilton, Vice President John Adams, and Secretary of State Thomas Jefferson the discussion moved, as was usually the case, to the proper roles and functions of government.

“Purge the British Constitution of its corruption, and give to its popular branch equality of representation, and it would be the most perfect constitution ever devised by the wit of man.”

Hamilton paused for a moment and then, to Jefferson’s shock, responded:

“Purge it of its corruption, and give to its popular branch equality of representation, and it would become an impracticable government. As it stands at present, with all its supposed defects, it is the most perfect government that ever existed.”

Now before we portray Hamilton as a sleazy champion of blatant corruption, let’s make his more nuanced meaning clear.

Hamilton wanted the new, fledgling United States to succeed, and he believed the support of the elite aristocracy and moneyed classes was crucial for its survival.

Thus in Hamilton’s opinion the glue that would hold the fragile federation of states together was mercantilist self-interest. If the elites partnered with government and became conditioned to rely on state authority to further their economic interests then they were more likely to throw support behind the new republic.

In Hamilton’s own words, the national bank was “a political machine, of the greatest importance to the state.”

Thomas Jefferson, a prodigious polymath in his own right, couldn’t have disagreed more.

As an intellectual product of the Scottish Enlightenment and reader of economists such as Adam Smith, Montesquieu, and Turgot, Jefferson was suspicious of centralized power and particularly central banks.

Jefferson viewed Hamilton’s proposal as a dangerous financial tool of centralized government and a paper-money machine that would more easily enable war and enrich the connected moneyed classes at the expense of the general population.

He also believed a central bank would breed wanton corruption and financial instability, just as he already knew the French Banque Royale and Bank of England had induced crises and depressions during the notorious Mississippi Bubble of 1719 and South Sea Bubble of 1720.

Yet despite their sharp philosophical differences, the final debate over the bank ultimately boiled down to legalities.

Jefferson urged Washington not to support a charter, arguing the Constitution provided no explicit authority for the federal government to charter banks let alone establish a “national bank.”

Hamilton argued that the Constitution gave Congress the right to “coin money” (note: not to “print" money), regulate its value, and regulate commerce between the states, and that the authorization for a national bank also existed under the Constitution’s “necessary and proper” clause:

“The Congress shall have Power… …To make all Laws which shall be necessary and proper for carrying into Execution the foregoing Powers, and all other Powers vested by this Constitution in the Government of the United States, or in any Department or Officer thereof.”

Washington, never comfortable with matters of economics and finance, resolved the quarrel in his familiar fashion: a compromise. He would support the establishment of a national bank, but its charter would only last twenty years after which a Congressional vote and presidential signing would be required for renewal.

Thus the Bank of the United States (BUS) opened in Philadelphia—uncoincidentally the U.S. capital at the time—on December 12, 1791. Although Alexander Hamilton was officially Treasury Secretary, he unofficially ran the BUS as his personal project, making him the combined Janet Yellen and Jerome Powell of his day.

II. THE BANK OF THE UNITED STATES STRUCTURE

The Bank of the United States was given an exclusive federal charter, the exclusive right to branch across state lines, and became the exclusive steward of the federal government’s deposits.

As Hamilton admired the Bank of England, he used the same method to raise startup capital that the English bank directors had employed nearly a century earlier: a joint-stock share offering; in this case $10 million or five times the capitalization of every other U.S. bank combined and over double the federal government’s annual revenues.

After the successful share offering the BUS immediately loaned $2 million of its paid-in capital to the federal government which the Treasury returned to purchase a 20% stake back in the BUS. The government would then repay its loan to the BUS from future bank dividends.

As Hamilton had intended, partial ownership in the BUS quickly aligned the government’s interests with the bank’s.

As soon as the BUS opened its doors, Hamilton went to work inflating credit and the money supply by aggressively extending loans in the form of new notes and deposits.

BUS notes were payable on demand in silver and gold specie, and the federal government’s announcement that they were the only banknotes acceptable for payment of excise taxes (the government’s primary source of revenue as there was no income tax at the time) gave them a quasi-legal tender status that guaranteed their acceptance and circulation.

Within just months of its opening the BUS had created over 2.5 million new dollars of money, a vast sum at the time, and price inflation was already taking hold in the young country. By Friedman and Schwartz’s estimates (1968) the equivalent of U.S. M1 rose by nearly 20% from 1791 to 1792. Rousseau and Sylla (2004) estimate closer to 33%.

This inflation is an important development and will be revisited in upcoming chapters.

We can see even early in George Washington’s first term American banking was already far from laissez-faire.

In Part 2 we’ll discuss Hamilton’s success in using the BUS’s power to finance the federal government’s assumption of the states’ Revolutionary War debts.

ps. The HBO Series “John Adams” does a fairly good job of portraying the Hamilton-Jefferson disagreement in a short two-minute dialogue (0:45-2:45) at: