Europe Turns its Back on its Own Natural Gas Resources, Volunteers to be Held Captive to Russia 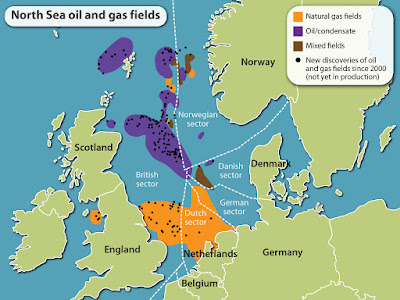 2 MIN READ - Europe's dependence on Russian oil and particularly natural gas has been discussed repeatedly on CO the last week or two, and Cautious Rockers have understandably questioned why European nations like Germany haven't turned to more reliable allies like the United States for their energy needs instead of Vladimir Putin's pipelines.

However the Cautious Optimism Correspondent for Economic Affairs and Other Egghead Stuff would like to add some value and take the question even further: why has Europe turned its back on its own energy resources?

Yep, you read that right. Europe has vast energy assets in the underwater oil and natural gas fields of the North Sea, with the region split into four particularly abundant zones: the British, Norwegian, Dutch, and Danish sectors (see map).

However, in what will be little surprise to CO readers the Netherlands, which has surprisingly large natural gas reserves both on and offshore and has traditionally been Europe's second largest natural gas producer, has gone woke the last few years and decided to shut down production at their Groningen field, the largest onshore natural gas resource in Europe. However offshore production continues albeit at a slowing pace as the government focuses on renewables for its green future (see articles).

"Towards Net Zero: How the Netherlands is turning its back on natural gas" (10/2021)

Denmark, which was energy independent and the world's 32nd largest energy exporter in 2008 (for a country of only 5.5 million) has also gone green, canceled all new oil and gas permits, and plowed boatloads of government money into windmills and solar panels while boasting about its wokeness.

The only two major energy players remaining, Norway and the UK, continue to draw primarily oil from their North Sea fields. Norway's left-center government has stated it plans no change in policy as the country is highly dependent on oil revenues to finance its modern welfare state.

Britain also continues to produce but has been facing far more internal political pressure and activism to abandon fossil fuels.

The recent British energy shortage, skyrocketing prices even before the invasion of Ukraine, and dozens of utility bankruptcies this winter may have put a damper on the energy scarcity movement since then.

Now the Economics Correspondent is not saying the entire European continent could be oil and natural gas independent on its own, but two of its four largest energy producers shutting down most natural gas production has put an already vulnerable continent into an even more compromised position with Russia.

Just as the Biden administration's continued cancelation of oil and gas permits (even just last week!)...

....and pipeline projects is creating energy scarcity that makes it difficult to impossible to sanction Russian oil/natural gas as they invade Ukraine, Europe has placed itself in the same predicament for pretty much the same reasons.

So it isn't just the USA that's shooting itself in the foot. Europe has made itself that much more captive to Russia with the same politics.