How the Hell Hell Can You Stand to Live in San Francisco? Part 6

7 MIN READ - The Cautious Optimism Correspondent for Economic Affairs and Other Egghead Stuff’s penultimate column on San Francisco screwups and how to survive them focuses this time on its lousy public bus system with plenty of supporting URL links. 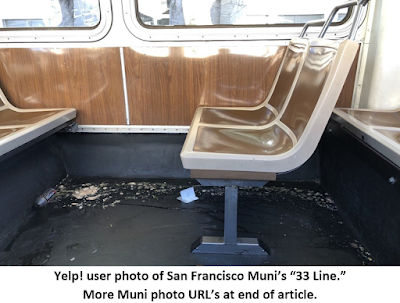 As CO has reported in the past, San Francisco’s bus system and the Bay Area’s BART commuter rail are giant, moneylosing albatrosses.

Now before I describe how bad these transit systems are, let’s first establish that I have a car and a garage which allows me to avoid setting foot inside San Francisco's crummy buses and railcars—one more bullet I've dodged that makes living here easier.

When I first moved to San Francisco I tried to be a naïvely good steward and use the “Muni” bus. That lasted all of two or three rides before I gave up, now using it only rarely.

My very first ride on Muni (ie. "hazing') went like this:

Even though I live in a really nice area and was riding the “1 Line” through other nice neighborhoods, I still found myself sitting next to a crazy guy mumbling to himself while in the seat across from me another passenger was reading a book titled “Murdered by Capitalism.”

On another ride the driver hit the brakes and a passenger’s wine bottle rolled down the aisle, crashing into the floor air vent spilling wine everywhere. Muni rules dictated the bus couldn’t operate anymore so we all got to wait outside on a chilly night for the next bus to come around 30 minutes later.

One ride I took downtown to pick up my car I was forced to listen to a crazy and/or drunk guy screaming about American imperialism in Spanish. It was nonstop “ch*nga Nicaragua!” and “ch*nga Vietnam!” and “ch*nga Iraq!”

Finally another passenger screamed “Hey, shut the f*ck up!” and the drunk/crazy guy went completely nuts screaming back. I thought a fight was going to break out, but there were too many passengers separating the two belligerents and eventually the crazy guy got off. I could still hear him screaming his politics on the sidewalk as the bus pulled away.

A friend of mine rode Muni in the winter and when the driver turned on the heat a colony of roaches came pouring out of the vents, scampering all over the floor and under the seats.

And on one ride a live chicken got loose from its Chinese owner and ran all around the bus with feathers flying everywhere. OK a friend of mine was on that ride, not me, but she told me all about it.

You get the idea. Muni is famous among locals for mentally unstable passengers and uncleanliness.

Adding to the unpleasantness is most Muni buses stop literally at every other block, making trips agonizingly slow. It takes over half an hour to travel the three miles from my apartment to downtown, not including time walking to your stop and waiting for a bus to arrive. The trip takes 10 minutes in a car.

If you have to make a connection to another bus to get to your destination the wait can be insane. Years ago Muni fares had already become so expensive and discouraged so much ridership that the city was forced to cut frequency. So you often spend more time waiting for a bus than sitting on one.

I once took a ride to a destination less than three miles away which required one connection. From the time I arrived at my first pickup point to the time I was finally dropped off at my destination one hour passed—30 minutes of it waiting for my connecting line.

I could literally have walked the three miles faster.

Muni fares are outrageously high. Just traveling three miles to the downtown Union Square area is $3. If you wait more than 90 minutes to take a bus back home it’s another $3.

Just the gasoline required to drive a car's single occupant six miles roundtrip only costs $1 to $1.50. Throw a second passenger in the car and it’s still $1 to $1.50, but the Muni fare goes from $6 round trip to $12.

Unsurprisingly the reason lies with Muni’s costs which, like everything else done by San Francisco government, are also outrageously high—not just in terms of compensation but also union work rules that force management to hire more workers and operators than it should have to.

So even with such high fares Muni still bleeds red ink every year which we’ll look at more closely in just a moment.

Muni workers are government employees represented by the Transportation Workers Union (TWU) of America, and truancy is rampant. The city estimated in 2016 that every Monday and Friday an average of 15% of scheduled workers simply called in sick. The cost of absenteeism to the taxpayer in 2014 alone was $42 million on a 2014 budget of $840 million (>5%).

In a particularly egregious example, on the first Friday of May 2009 22% of Muni’s 1,600 drivers and operators were unavailable, most calling in sick.

Just a reminder that May is not part of flu season.

And Muni management has to employ that many more drivers to cover for the ones they know aren't going to show up for work.

Furthermore every time the Muni union's contract is up for renewal the city grants generous raises.

But in early 2010 things were supposed to be different.

While the rest of America was sweating through the most painful phase of the Great Recession and millions of Americans were losing their jobs, then-mayor Gavin Newsom announced he was engaged in “tough negotiations” with the Muni union over their new contract. A few days later he promised a historic new agreement that would look out for the interests of the riders and taxpayers and “end business as we know it.”

When the terms were announced, Newsom had granted the drivers a 10% raise for the next year. The contract also restricted Muni management from hiring additional drivers for peak periods, management was severely limited in its ability to discipline bad driver behavior, and overtime was paid to drivers based on vacation and sick days, not actual hours worked.

Yes, a driver could call in sick Monday, then work ten hours each day Tuesday through Friday for a total 40-hour workweek, and still get paid forty hours plus another eight hours overtime, a 30% raise for the same hours worked.

That makes the Monday/Friday truancy problem a little easier to understand.

Finally the contract guaranteed Muni workers would remain at least the second highest compensated bus operators in the USA. That requirement has been a cornerstone of Muni worker contracts for a long time.

In return, the city was granted the “historic concession” of some additional flexibility in scheduling part-time drivers.

SFMTA's main revenue sources are bus fares, parking meters and fines, and the city’s general fund which is effectively a taxpayer subsidy.

Yet even before the pandemic SFMTA’s annual deficit was over $100 million a year on a budget of about $1 billion, and post-pandemic the agency is forecast to produce an accumulated deficit of $36 billion over the next thirty years.

Even I don't understand how on earth an agency running $100 million annual deficits can rack up a $36 billion shortfall in thirty years. Even if one adds the $300 million city taxpayer subsidy to the deficit it still doesn’t come close.

Three decades of future expected inflation could explain some of it but not enough. So lacking more information I’m inclined to finger impending pension costs. It’s no secret that California government pensions are insanely generous and that a giant statewide $1 trillion underfunded pension tsunami is just around the corner.

But not to worry, according to the San Francisco Chronicle SFMTA received $370 million from the first CARES Acts which I’m sure Nancy Pelosi had nothing to do with. The Biden administration awarded SFMTA another $288 million in 2021 and commitments to future bailouts raise SFMTA’s take to more than $1 billion through 2022.

So back to lousy, overpriced Muni service. Combined with the purposely inadequate taxi licenses issued by city government, is it any wonder that Uber and Lyft were wild overnight successes the moment they arrived in San Francisco? White collar professionals with daily downtown commutes were particularly fast defectors.

The arrival of Uber and Lyft precipitated an acceleration of Muni's ridership decline, widening its operating losses, and the Muni union and many city officials sought to hobble Uber and Lyft’s ability to compete.

The solution? Slap a city tax on Uber and Lyft rides and redistribute the money to Muni to prop up its failed model.

Just as Ronald Reagan said many decades ago: “Government's view of the economy could be summed up in a few short phrases: If it moves, tax it. If it keeps moving, regulate it. And if it stops moving, subsidize it.”

Note: Facebook only allows a single preview photo per post, but here are links to some Hall of Fame pictures taken by Muni riders themselves.

2) Caption: “Smell cleared out the entire midsection of the bus”