How the Hell Can You Stand to Live in San Francisco? Part 4

6 MIN READ - The Cautious Optimism Correspondent for Economic Affairs and Other Egghead Stuff continues his mini-series detailing a hodgepodge of self-inflicted problems plaguing San Francisco and how he's been able to sidestep most of them living there. This time the two subjects are taxes and the more complex issue of gas prices—with plenty of supporting URL’s. 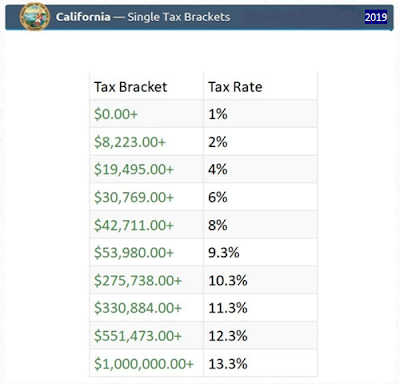 OK, California has high taxes. When I moved here nearly 18 years ago the top income tax rate was 9.3% (of taxable income minus California deductions) for any marginal income over about $43,000. The marginal bracket has since been raised to $58,000 which still isn’t even middle class in San Francisco (ie. “the City”).

Then the 2009 Great Recession produced yet another state fiscal crisis. Then-governor Arnold Schwarzenegger accepted a “temporary” top income tax rate hike to 11.3% on higher incomes with Sacramento Democrats. Minority Republicans abandoned Schwarzenegger when he caved to more tax hikes telling him he was “on his own,” because we all know how long “temporary” tax hikes last.

Well Schwarzenegger and legislative Democrats were actually honest about that hike. The 11.3% rate technically was “temporary.”

I don’t want to disclose my annual income but let’s just say once again I haven’t been impacted, at least not in the sense of having my taxes raised since I moved here. I still pay the same 9.3% rate as before, but a lot of richer people have seen their taxes skyrocket and moved out to Nevada, Florida, and Texas, taking their businesses, jobs, and tax revenue with them. California government has thus become increasingly dependent on a smaller and smaller number of wealthy taxpayers to finance a majority of its revenues… all while campaigning that “the rich don’t pay their fair share.”

And as my income has risen over the years I’ve plowed more and more into my 401k which is one of the few tax breaks the state still recognizes. Having a Health Savings Account also helps lower your income tax burden, except in three out of 50 states which, yes, includes California. Sacramento politicians claim they want to help working families, especially to afford healthcare, but they’ve made California one of those just three states—alongside New Jersey and Alabama—that prohibits a tax deduction for HSA contributions.

Yes, California has the highest gas prices in the 48 continental states. But before I touch on how it got that way I’ll just establish that I’m pretty immune from that one too—yet another reason I can stay here.

San Francisco is a very small city (7 miles by 7 miles) and everything I need is typically very close. I also work from a home office or fly to clients with company paid Uber rides to the airport so there’s no daily commute.

In a typical year I put 4,000 miles on my car and that includes an annual vacation drive down to Los Angeles and/or San Diego which contributes to 1,000 of those miles.

So gasoline can go up to $10 a gallon and I really don’t notice. One more reason I’m not driven out of San Francisco.

However millions and millions of Californians have been home-priced way out into the suburbs and forced to commute two, three, or even four hours round trip to work every day. For them, gas prices are a killer, especially now that regular gas is well over $4 a gallon and premium over $5.

So why is California so bad?

The first reason—and the easiest to grasp—is California has the highest gas taxes in the USA. About 61 cents per gallon for gasoline and 87 cents for diesel (neither includes the additional 18.4 cents federal gas tax, click on map). 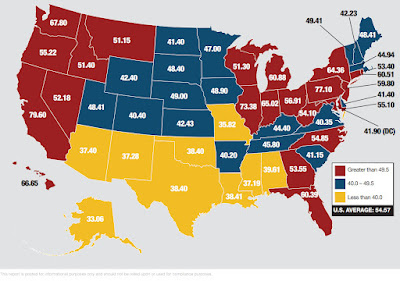 When oil and gasoline prices were low during the Trump years, the Sacramento legislature quietly snuck in more gas taxes when the public wouldn’t notice and the law raises the tax year after year (California gas taxes rose yet another 5 cents in July of 2021).

Well now California motorists are upset about gas prices that are closing in on old records, but the local news is blaming higher crude oil prices.

Crude oil was hovering around $80 a barrel two weeks ago, but during the 2011-2014 period crude oil regularly traded in the $100-$110 range and gas prices were almost the same. Clearly something other than crude oil is contributing to near-record gas prices in 2021. All the new taxes that have been added in the last decade are a big part of it.

Another inflationary California policy is gasoline blend mandates. California regulations require several unique gasoline blends that are deemed more environmentally friendly, but the law goes even further. Gasoline that is refined outside California, even if it meets all the formulaic requirements, cannot be sold in California.

So the California market is an “island” separated off from the rest of the country. I know what you’re thinking: If only its voters were the same, right?

Furthermore, there are only a few refineries in the state and regulators haven’t allowed a new refinery to be constructed in over forty years.

So the supply of gasoline is artificially constrained by law with no out-of-state shock-absorbing capacity, and every time a refinery has an outage for maintenance or an accident and takes capacity offline, the supply blip sends prices soaring even further.

In the rest of the 48 United States a single refinery outage isn't as big a problem. Refined gasoline can flow in effortlessly from other states, most easily over pipelines, and the effect of the refinery supply shock is so spread across the country that it’s barely noticed.

Next, California is famous for capricious changes in gasoline mandates that drive up costs for refiners.

In 1989 the California Air Resources Board (CARB) mandated refiners must formulate their gasoline with oxygenators like methyl tertiary butyl ether (MTBE) or ethanol. The refiners objected, arguing that retrofitting their operations would cost billions of dollars that would be passed on to consumers, that the oxygenators reduced fuel mileage which would partially cancel out pollution gains, that oxygenators tore up car engines faster, and that MTBE in particular was a carcinogen (which CARB strongly denied).

Nevertheless California refiners were ordered to add the chemicals, driving up the cost of gasoline.

Ten years later gas station tanks in Santa Monica were found leaking fuel into local groundwater and CARB quickly reversed course, ordering refiners to stop putting MTBE in their gasoline. The City of Santa Monica sued several energy companies for (paraphrasing) “allowing a known carcinogen to contaminate the local groundwater,” despite the fact that refiners fought the oxygenator mandate to begin with.

You get the idea. These costs were all ultimately borne by California motorists at the gas pump.

Finally, put all these factors together and you can get a full blown crisis such as in 2012.

When a major refinery outage caused yet another surge in California gas prices, Senator Dianne Feinstein decided to grandstand and threatened an investigation into price gouging:

Refineries and gas stations, fearful of becoming targets of the political crackdown, chose to avoid controversy by voluntarily limiting their price increases. And as we all know price ceilings, whether mandated or adopted “voluntarily” by suppliers fearing retribution, produce shortages. So California gas stations began running dry creating a full blown supply crisis.

Out-of-state refiners offered to relieve the shortage with their own “winter blend” gasoline, but by law they couldn’t help.

Finally after several weeks of mass disruption with commuters and businesses that relied on ground transport then-Governor Jerry Brown signed an emergency provision allowing winter-blend fuels to be imported from outside California.

The shortage crisis ended almost immediately, but the entire affair serves as Exhibit A of how California regulations not only produce the highest gas prices in America, but intermittent severe energy squeezes as well.

In the next chapter we’ll talk about Bay Area power blackouts, electricity power rates, and those skyrocketing bridge tolls.