How the Hell Can You Stand to Live in San Francisco? Part 5

7 MIN READ - The Cautious Optimism Correspondent for Economic Affairs and Other Egghead Stuff submits another entry from his series on surviving San Francisco’s epic screwups. The first of today’s subjects is electric power blackouts and rates. The second, rising bridge tolls, might not sound very interesting until you read exactly why they've skyrocketed. 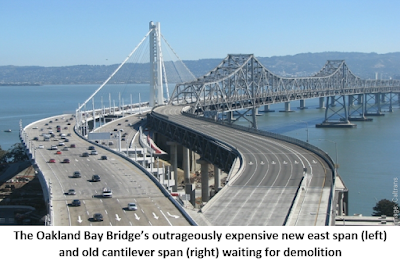 As CO has previously reported California suffers from wildfires in part because most of California is naturally a very hot and dry place in the summer, because environmentalists prevent prudent forest management, because its utilities are forced by Sacramento regulators to divert billions of dollars from maintenance budgets into expensive green energy initiatives, and because it has psychotic left-wing academics who run around committing arson in the wild (see URL).

California cities and states have since sued utilities like PG&E into bankruptcy who in turn switches the power off during hot and windy days to protect itself from even more liability.

Which makes tough sledding for senior citizens living in Modesto when their air conditioning goes out on a 105 degree day, or an ice cream shop owner in California’s Central Valley whose electricity gets cut off in the summer.

But your Economics Correspondent has so far been immune from both fires and blackouts because he lives in the city of San Francisco itself.

Being surrounded on three sides by cold Pacific Ocean water summer temperatures in the city are typically 60 to 65 degrees while San Jose, just 40 miles away, bakes in the triple digits.

Summer is also the foggiest season in the city. Constant waves of fog from the Pacific keep the vegetation watered and green. In fact, if I’m out for dinner on a foggy night I deliberately avoid parking under tree overhangs because they drip so much condensed moisture on my car. It’s also not unusual to use intermittent wipers when driving through San Francisco on a foggy summer day.

San Francisco’s vegetation remains green all year round while grassy hills even just a few miles away in Tiburon are parched yellow eight months out of the year.

Yes, all of California’s green energy initiatives have produced one of the highest kilowatt-hour rates in the nation at $19.90 (Nov 2021: only lower than Alaska, Hawaii, Connecticut, and Massachusetts).

It's also unlikely to get better if San Francisco city government gets their way: they want to nationalize PG&E’s power lines and operate the grid themselves.

However once again I’m spared high power bills by living in the city itself. The surrounding waters make for mild temperatures all year round and San Franciscans generally don’t need to consume a lot of power. My typical monthly power bill outside of winter is $50. During winter it might rise to $90 with the use of electric space heaters when the timed gas radiators aren’t running.

One piece of trivia many people don’t know is that most residences in San Francisco have no air conditioning. Aside from the fact that many of the buildings are quite old, the truth is they don’t need it. The cold Pacific Ocean regulates temperatures and keeps them moderate.

I’d say there are probably seven or eight days out of the year that I wish I had air conditioning, and living on the top floor I’ve got it worse as anyone who has gone up to their attic on a hot summer day can attest to.

But for those who live in the 80%+ of the Bay Area that does heat up in the summer, power bills can be murderous.

The San Francisco Bay Area’s bridge tolls have skyrocketed since I moved here. In 2004 the toll for two-axle vehicles on the Oakland Bay Bridge into San Francisco was $2. Today it’s $6 and goes to $7 on January 1st (up 250%)

Yet the bonds for the original construction of the Oakland Bay and Golden Gate bridges were paid off in 1955 and 1971 respectively, and the remaining maintenance costs don’t come anywhere close to the near $250 million in annual toll revenue collected by the Bay Bridge and $150 million by the Golden Gate.

During the 1989 Loma Prieta earthquake a section of the cantilever design east span’s top roadway collapsed onto the bottom section, killing a driver. Engineers analyzed the damage and concluded that in the event of another 1906 Great Quake, which is estimated to have released 30 times more energy than the Loma Prieta quake, the entire span would collapse into San Francisco Bay.

Engineers also reported that the west span connecting Yerba Buena Island with San Francisco, being of more resilient suspension design, could withstand another 1906 Great Quake with seismic retrofitting instead of replacement.

But everyone agreed a new east span must be built. The cost estimate was $250 million.

However the project was delayed by nearly 15 years due to political infighting over issues such as:

-The most aesthetic design to use

-What color to paint the span

-What political leader’s name the span should bear

-The question of bicycle lanes on the span

-An environmental impact study on the water beneath (a huge holdup)

-Arguments about building over a small patch of water that technically belonged to the U.S. naval base on Treasure Island

Finally in 2004, fifteen years after the initial disaster, construction began.

With all the delays, higher financing costs, and higher materials costs due to increased demand from China, the project ran out of money one year later.

Bay Area officials asked Governor Arnold Schwarzenegger to fund the cost overruns from the state’s general fund. He turned down the request, blaming them for the delays, and refused to force all California taxpayers to fill the gap for what had become such an expensive project.

Schwarzenegger did offer to help on the condition that Bay Area officials abandon their glorious but costly suspension design and settle for a cheaper “highway on stilts” viaduct. Local politicians balked in turn, the Bay Area Metropolitan Transportation Commission director slamming Schwarzenegger’s proposal as “an aesthetic Chernobyl” (never mind the aesthetic Chernobyl that is the San Francisco Tenderloin District's sidewalks—evidently that looks just beautiful).

Then Bay Area officials asked Caltrans to hike tolls all over the Los Angeles area to raise the money. L.A. commuters were incensed, arguing the Bay Bridge fiasco was a Bay Area screwup and they refused to pay.

Finally a compromise was worked out for a single suspension tower design combined with a “highway on stilts” and would be paid for with huge Bay Area bridge toll hikes for decades to come.

A decade later when the new east span was opened, nearly a quarter century after the earthquake that prompted its construction, the cost had reached $6.5 billion, more than twenty-five times the original estimate.

And even after all the cost and schedule overruns, officials made a last-minute discovery right before opening: large bolts that provided a key seismic support were defective and already cracking from “hydrogen embrittlement,” the product of incorrect specifications, manufacturing defects, and the moist sea air. The highway had already been paved over the bolts—which are anywhere from seven to nineteen feet long—so it took a lot of additional investigation and money to determine a fix.

Nevertheless Caltrans argued the new span, even with defective seismic bolts, was safer than the old one which was promptly torn down. Locals joked that officials were in a hurry to disassemble the old 1936 cantilever span fearing that if a strong earthquake struck the new span would collapse into the Bay while the old one held up.

With the bolt problem finally addressed years later, the total cost of the east span plus demolition of the old cantilever span exceeded $6.5 billion.

And all for a “span” which is actually just half a bridge.

For comparison purposes, the Golden Gate Bridge was constructed in the 1930’s within four years under far more difficult engineering conditions at a cost of $35 million or $570 million in 2014 dollars.

But that’s San Francisco for you. And that’s why tolls have gone up by triple digits over the last decade-plus.

Incidentally I have never read about the firing of a single high-ranking Caltrans or Metropolitan Transit Commission official over the debacle. But I guarantee you if the east span project was for-profit and conducted by a private corporation San Francisco voters and commuters would be demanding arrests, show trials, executions, and burnings at the stake.

Oh, and how am I personally affected?

But for daily commuters who are forced by high housing prices to live in the burbs it’s a huge cost. A commuter from Marin County using the Golden Gate Bridge on weekdays pays $180-$190 a month without an electronic tag (about $2,200 per year).

Of course one could just commute in using the BART rail system, only that BART doesn’t serve Marin County. Bridge officials have expressed concern that BART could cut into their toll revenues and Marin County's uberwealthy, progressive residents are lukewarm to the prospect of the lower classes gaining easy access to their exclusive neighborhoods. Plus BART is another huge albatross plagued by obscene cost overruns, so if you live outside the City and have to commute in then it becomes a matter of “pick your poison.”