The news media are reacting to the Rittenhouse verdict and Yahoo!News decided to headline a piece on public reaction.

Included in the story was this photograph captioned "People react to the verdict outside the Kenosha County Courthouse." 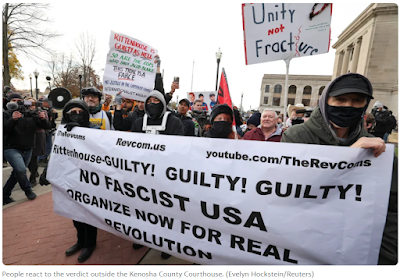 But a quick check of the "revcom.us" label on the banner reveals the "people" are organized members of the Revolutionary Communist Party USA.

Nice of them to not point that out.

Considering nearly every group outside the Kenosha County Courthouse that was hoping for an acquittal is assumed to have "white supremacist" connections by the media you would think they'd also have done readers the courtesy of pointing out the "people" in the photo are Revolutionary Communist Party USA members.

But this is the 2021 U.S. media we're talking about here, isn't it. Some of the journalists are probably in the photo.

Now if the banner had read "Prowdboyz.org"...

(had to deliberately misspell that because Facebook blocked me from posting this piece for "violating community standards" with it spelled correctly, but as you can see they accept "Antifa.org" as if it were Visa or Mastercard)

...does anyone think the photo caption would casually refer to them as "people reacting?"