5 MIN READ - The Cautious Optimism Correspondent for Economic Affairs and Other Egghead Stuff provides an addendum to his recent column on the “raising the minimum wage will increase the firm’s profits” fallacy. 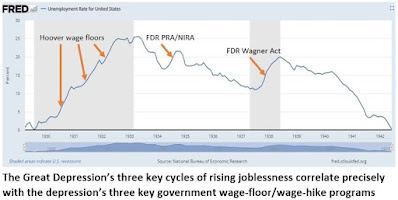 In our previous column on minimum wage economics and fallacies we examined the often repeated claim by higher minimum wage advocates that raising pay for low-skilled workers will actually increase a firm’s profits.

This argument was dissected on multiple fronts including:

1) It assumes no workers lose their jobs.

3) Each dollar of additional worker pay actually costs the firm $1.0765 (including employer-paid payroll and Medicare taxes).

4) Each dollar of additional worker pay is whittled down by taxes too, 7.65 cents going to employee-paid payroll and Medicare taxes and a typical 12% marginal federal income tax rate plus variable state income taxes (assuming no federal earned income credit).

5) Whatever the employees spends at his own workplace (the worker decision required to generate the promised profit boost) costs the employer money to produce.

When measuring based on net profit margins at the recently controversial grocery retailer Kroger, each $7.75 sacrificed from profits to increase hourly pay generates at best 15 cents in returned profit for a net loss of $7.60. Hardly a model for higher net income.

But there’s one more fallacy we shall expand even further on:

6) The employee will not spend their entire raise at their own workplace. For example, a fulltime Subway employee who gets a $7.75 per hour raise will not spend (after taxes) $49.60 on Subway sandwiches every day. Rather much of their pay will be spent elsewhere and the employer will get even less than 15 cents per hour back.

When confronted with the simple math that proves raising wages does not magically produce higher profits for firms, more sophisticated "Fight for $15" proponents will often argue it really does work, but only if it's applied to every industry, to nearly every worker, and to nearly every wage level (excluding high earners) simultaneously.

“Sure, if you force wages up only at Subway then the extra purchasing power of Subway employees may ‘leak out’ to other firms and deprive Subway of higher profits. But if wages are raised everywhere—including for the entire middle class—then the massive wave of additional dollars spent nationwide will provide a net benefit for all industries.”

“Even though Subway workers may spend their raise on Apple phones which employ few minimum wage workers, raising wages for middle-class Apple engineers will result in Apple employees spending more money at Subway. So all companies and industries will see their profits rise and the asymmetric flow of spending that previously hurt only Subway will become symmetrical and harmonious.”

Although this theory once again ignores completely the impact of “leakage” through taxes on the employees’ raises, and commits the even greater error of ignoring that employees who spend more are buying something that costs businesses a lot of money to produce (hence only a small fraction of the raise is secured as recaptured profit), there’s a cornucopia of real world evidence that the “raises for all” strategy has actually been tried already, and on the grandest scale: the entire United States workforce.

To call the outcome a miserable failure would be an understatement. It was the Great Depression.

One of the greatest policy blunders of the Great Depression was wage controls, both under the Hoover and FDR administrations. The Correspondent has written extensively on this period but will give a brief description here. If you’re interested in more detail go to:

Herbert Hoover’s first act as President after the 1929 stock market crash was to convene a series of White House conferences with business leaders and strongarm them into not lowering wages during the coming slump. He made an articulate case that keeping up purchasing power among all workers nationwide would actually improve business due to higher demand/spending, and he promised that maintaining high wages would end the recession in a matter of months.

Business leaders were inspired and promised to keep wages up. In fact, as deflation set in, prices fell by 30% over the next three years and nominal wages remained constant, so workers actually got a real 43% pay raise.

The “benign pay raises” lobby couldn't have asked for a better experiment.

The demand-side theory of higher universal wages would predict the economy boomed with all that extra purchasing power floating around. Nearly all workers make 43% more in real terms so the extra spending must have sent corporate profits into the stratosphere.

But instead businesses ran huge losses as their revenues fell but wages remained high, cutting into gross margins, and they were forced to fire workers en masse to survive. By 1933 the unemployment rate was 26% and the economy had entered the worst slump in U.S. history.

So much for the “giving everyone a raise will be greater for business” theory.

Giving the entire laboring and middle classes a pay raise was not only not good for business, not only did it not deliver unprecedented prosperity, not only did it not achieve something as modest as stemming the tide of recession, it actually plunged the United States into the Great Depression.

After convincing bank customers to redeposit their money the economy began a strong recovery, and had FDR left well enough alone the depression may have been over by 1934 or 1935 at the latest

Instead FDR signed the National Industrial Recovery Act in late 1933. Written into the NIRA law was the Presidential Reemployment Agreement (PRA) which mandated a high minimum wage that exceeded market wages even for many factory workers.

The economy promptly U-turned and immediately contracted in the equivalent of a 2007-09 Great Recession, only instead the slump was compressed into a harrowing four months. The unemployment rate rose five points in just four months, back to 22%.

Ironically since the crash only lasted four months it doesn't go into the history books as a technical recession—defined as two consecutive quarters of negative GDP growth—even though it was more painful than the 2007-09 Great Recession.

The Supreme Court eventually ruled the NIRA unconstitutional and the recovery once again resumed.

FDR tried one more time in 1936 with the National Labor Relations Act (aka. the Wagner Act) which marked the most significant empowering of labor unions by government decree in American history. Over the next year the number of nationwide strikes, striking workers, and labor hours lost to strikes more than doubled across the board. With their hands tied by federal regulation, firms were forced to raise real wages nationwide.

Combined with tax hikes in 1936, raising the top income tax rate to 79% (something else "Fight for $15" proponents campaign for) the following year delivered the Depression of 1937-38, the third worst slump of the 20th century. The recovery U-turned yet again and the unemployment rate rose 10 points in just twelve months, up to 21%..

All three coincide perfectly with novel government “high-wage” policies that were applied to far more than just the lowest-skilled sectors of the workforce.

So the great demand-side, “raise-everyone’s-pay” experiment has already been tried on a nationwide scale—three times during the Great Depression.

It’s not hyperbole to say the result each time was unemployment disaster. Both the theoretical and empirical evidence contradict the “force every worker’s pay up” proposal, and it’s no coincidence that the failures of universal wage floor policies during the Great Depression have since been struck from the history books and remain ignored by the present day media.