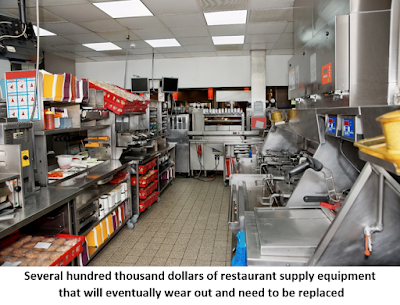 In previous articles we examined Marginal Revenue Product (MRP), a major variable many businesses account for when deciding to hire or retain one more worker. MRP is the amount of additional revenue a firm can secure with the labor of an additional (ie. marginal) worker.

To go back and read MRP basics, visit:

As the marginal cost of securing a new worker’s Marginal Revenue Product, MFC is closely associated with MRP since MRP minus MFC is roughly the gross profitability of producing and selling one more unit of output.

There could be the cost of an additional uniform or two, fringe benefit costs, and there are always HR and compliance costs associated with hiring a new worker.

And most importantly there’s the often-ignored (by higher minimum wage proponents) cost of inputs to bring the final additional product sold into existence.

As an extreme example the hiring of one new salesperson at a jewelry store may capture $10,000 in weekly MRP with the sale of one additional Rolex watch, but it would be a mistake to argue the store’s marginal gross profit is 90%+ just because the worker’s wage is $1,000 per week. In fact, when selling Rolexes MFC is far higher than the employee’s wage since the wholesale cost of the actual product—the Rolex itself, at likely several thousand dollars—represents the greatest share of MFC, not wages.

So the key lesson here is that for a new-hire to be profitable, MRP can’t just equal or negligibly exceed wages. The difference has to be great enough to account for all non-wage costs as well.

As a resident of San Francisco the Economics Correspondent has heard this headscratcher from Bay Area left-progressives more times than he can remember, and MFC demonstrates just how incredibly illiterate many of them are about the most basic aspects of business.

In their minds, “Fight for $15” proponents understand the minimum wage math perfectly:

“$7.25 per hour to $15 per hour is an increase of $7.75 per hour. Therefore, if a Big Mac costs $4 then don't tell me there's any harm to the employer. All the worker has to do is flip two more burgers per hour and that pays for the higher wage. How hard is that? This proves that greedy employers are lying about not being able to pay higher wages.”

“Logic” like this is why San Francisco progressives aren’t running businesses and restaurant managers and executives are.

1) First, every business—restaurants included—works and obsesses 24 hours a day on marketing schemes to get just one more customer to walk in the door every day, let alone two per hour. That Fight-for-$15 activists think restaurants arrogantly turn away customers at the door like a club bouncer and only need wave a magic wand to sell two more burgers per hour shows real ignorance about the persistent challenges businesses face in increasing sales profitably.

Firms either have to offer incentives or flat out lower prices to entice more customers (which cuts into margins), and/or they have to increase marketing budgets or invest in new products or facilities to make the business more visible or attractive to a larger market of consumers.

All of this costs money because two extra orders per hour aren’t going to magically appear cost-free out of thin air.

So flipping two extra burgers per hour is neither as easy nor cost-free as imagined in the mind of the progressive activist.

2) Even if the business were able to magically produce a consistent two additional burger sales per hour—hour after hour, day after day—the polemic solution fallaciously focuses on only a single employee: the burger griller.

But he’s not the only one getting the raise.

“Fight for $15” advocates forget the employer has to pay $15 an hour to *every* worker, including those engaged in supporting activities other than burger grilling: the counter cashiers on shift, the drive through worker, employees dealing with deliveries and garbage or constant store cleaning and sanitation.

The Economics Correspondent doesn’t know all the roles workers perform in a McDonalds, but he knows something social justice arithmetic doesn’t: the store is not staffed by a single employee, ie. one guy standing at a grill.

If there are say, six employees on duty during a specific shift, the store has to sell not two, but twelve additional burgers hourly to compensate for all their raises. How quickly some people forget it takes more than just a single burger flipper to run an entire restaurant.

3) Even if the store magically can sell twelve more burgers per hour (this is now a ridiculous assumption, but we’ll keep going), there are also those Marginal Factor Costs beyond just the higher wage.

For starters, the burgers being grilled don’t come free to McDonalds. The assumption in the progressive “model” is that the only Marginal Factor Cost is wages, and somehow the actual product—food—costs zero.

The model also assumes stagnant utilities costs for additional food preparation. It also assumes that such a huge increase in production will have no impact on the rate at which restaurant supply equipment (fryers, drink machines, dessert machines, ventilation systems, cash registers/POS devices, ie. capital equipment) wears out.

With the additional customer traffic restaurant tables and chairs will wear out and have to be replaced faster. Garbage bags are filled faster and have to be attended to more frequently. Entrance doors, restroom doors, tiling and carpeting, will wear out faster. Even restroom hand soap, hand dryers, sinks, paper products, toilets, cleaning chemicals, etc… will have to replaced more frequently.

Each one of these items individually may not cost a fortune, but add them all up and they will cost considerably more than the assumed “free” in the "living wage" model. An actual inventory of the additional costs incurred to prepare and sell 216 extra burgers a day (12 per hour across a 6AM to midnight operation) and accelerated depreciation over the course of a year or two might surprise a lot of people—social justice warriors the most.

And in case you didn’t already figure it out, costs associated with more food, more restaurant energy, more supplies, and costs associated with depreciation of capital equipment, etc... are all part of Marginal Factor Cost *on top of* the higher wage. Hence we’re reminded that MFC is an important concept and higher wages are just one piece of that story.

Businessmen have to account for all these costs, but they're ignored by the progressive “Fight for $15” activist’s model that insists all one guy has to do is just flip two more burgers per hour for minimum wage hikes to magically pay for themselves.

If such activists were set loose to run a fast food restaurant themselves they’d quickly lead the enterprise into bankruptcy, much how Hugo Chavez took over Venezuela’s private assets and bankrupted an entire nation.

We’ve used a fast food restaurant for an example, but minimum wage jobs extend into other trades such as travel, hospitality, or other forms of retail.

The same MFC constraints exist for a company like Walmart: additional customers are not easy to get, luring them in costs money, and whatever product you ultimately sell them costs money too—whether it’s apparel, electronics, food, or auto parts.

If Walmart sells one more HDTV it might mean $250 in additional revenue. But is the cost of acquiring, distributing, marketing, inventory, transacting, and delivering that HDTV really zero?

Many “Fight-for-$15” activists believe so.

Lastly, once the firm collects Marginal Revenue Product and pays Marginal Factor Cost it’s left with a marginal gross profit. But as we shall examine more closely in a future column, gross profit is not final profit—far from it.

The firm must then subtract selling/marketing costs—which have likely risen to attract those twelve additional customers per hour—and general corporate and administrative costs.

The firm must also subtract depreciation (which we already covered as capital equipment wear and tear in our example) and amortization.

Then there’s servicing interest on debt and debt repayment.

Only then, after all “non-cost of sales” budget items are subtracted can the company report a net profit, assuming it realizes one on Marginal Revenue Product once all those additional costs and the higher minimum wage are factored in.