Minimum Wage Economics and Fallacies: Labor vs Capital Part 1 of 2

5 MIN READ - More on the minimum wage from the Cautious Optimism Correspondent for Economic Affairs and Other Egghead Stuff. 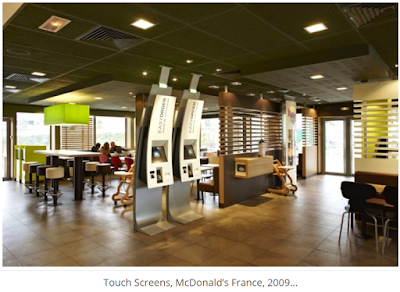 Cautious Rockers intuitively understand that workers and machines are in constant competition for productive work, and that businesses are going to weigh the cost/productivity ratio of one against the other when deciding which to employ.

Although classical economists such as Adam Smith and Jean-Baptiste Say had already identified the benefits of labor-saving devices in their late 18th century writings, it was British economist David Ricardo who famously summarized the competition between workers and machines in the third version (1821) of “On the Principles of Political Economy and Taxation.”

In Chapter 31, named “On Machinery,” Ricardo praised the ability of machinery (ie. “employed capital”) to enhance the productivity of labor and create more goods and services with fewer workers. But he also noted that if the production cost of capital fell below the equivalent cost of labor then the laboring classes would be placed at a disadvantage and lose their jobs—although some new, highly skilled workers would be needed to maintain the machines.

This is all conventional thinking today, but Ricardo recognized the developing phenomenon two hundred years ago during England’s first Industrial Revolution.

I. WHEN GOVERNMENT PLACES LABOR AT THE DISADVANTAGE

Which leads us to an obvious, self-evident conclusion. If labor is competing with capital for jobs that entrepreneurs need completed, and labor can produce one unit of output at lower cost than capital can in its existing state of technological efficiency, labor will remain gainfully employed.

However if the cost of labor is artificially inflated enough by government mandates and wage floors, capital will win the cost race and entrepreneurs will begin replacing workers with machines.

The classic example that is frequently cited at the center of the minimum wage debate is the self-serve kiosk.

Kiosks are hardly free technology. Aside from the relative low cost of the touchscreen itself there’s also the cost of employing higher-skilled labor to install and maintain kiosks, to program and upgrade software, to administer the kiosk network with constant, localized price changes across hundreds or even thousands of stores, and to replace kiosks that break or wear out (depreciating capital).

So long as the market wage for human cashiers is a less expensive proposition than the investment and maintenance cost of kiosks, businesses will choose to retain labor.

This is precisely what we see in most restaurants in those states and cities where the minimum wage remains at or close to the federal standard of $7.25 per hour.

However as the minimum wage is forced up in other states and cities, the incidence of kiosks replacing workers increases, just as Ricardo predicted 200 years ago.

As an anecdote, the Economics Correspondent lives in San Francisco and watched the voter-approved increases in minimum wage rise to $12.25/hour in May of 2015, $13 in July of 2016, $14 in July of 2017, and $15 in 2018. With each summer’s increase the Correspondent saw the sudden installation of kiosks in new batches of restaurants and the disappearance of human cashiers. By the time $15/hour was reached in 2018 several of the restaurants that had employed kiosks one or two years prior simply closed down as did many other restaurants that had been San Francisco staples for decades.

Meanwhile the Correspondent visited Louisiana on a business trip, walked into a restaurant chain whose San Francisco locations had replaced cashiers with kiosks before closing in 2018, and saw not a single kiosk in the Louisiana store but instead three smiling human cashiers waiting to serve him.

Louisiana’s minimum wage at the time was the federal floor of $7.25 per hour.

II. “BUT IT WAS GOING TO HAPPEN ANYWAY”

Most “Fight for $15” proponents deny that raising the minimum wage will result in capital displacing labor, but when it actually happens they rarely acknowledge that their prediction of no job losses was wrong nor admit any error nor show any sympathy for the fired workers whose welfare they claim to care about.

Instead the most common, unremorseful pivot is to change the argument to “Well, kiosks were going to replace cashiers anyway,” as if the jobs were sure to be eliminated by the relentless march of technology—coincidentally right after the minimum wage hike.

Readers can agree that over time certain capital devices, particularly those that employ information technology, do become less expensive and more economically competitive, and that fast food kiosks are probably no exception.

However what is highly debatable is that low-skilled jobs would be replaced as quickly were it not for the government-imposed price floor.

Although McDonalds began experimenting with self-serve kiosks in its flagship Oak Brook, Illinois store as far back as 2003, McDonalds France began installing permanent kiosks as early as 2004 and in London by 2009. In 2011 McDonalds announced it was ordering 7,000 kiosks for use in its European stores and by 2016 McDonalds reported 90% of all stores in France were using self-serve kiosks.

(citations at the end of this article)

The Correspondent doesn’t recall seeing permanent McDonald’s kiosks—or even encountering a temporary one—in the U.S. in 2004 or 2009 (maybe he missed it?), and even today many McDonalds locations still exclusively use human cashiers, particularly in most red states.

Uncoincidentally virtually all customer orders are now processed by kiosks in blue strongholds like San Francisco, New York City, or most of Illinois state where local minimum wage hikes have priced labor at a disadvantage to capital.

Moreover, French labor laws make it nearly impossible and at best exorbitantly expensive to fire workers under age 26, and when the Chirac government attempted to reform the laws in 2006 French youth rioted and burned cars in the streets of Paris that very same year. Hence French employers know there’s a real risk that under-26 labor will be very unproductive since young workers know they can “get away” with a lot of sloth and other misbehavior at work.

In the UK the minimum wage in 2009 was £5.80 or $9.28 based on the exchange rate ($12.08 in 2021 dollars). This wage lagged France’s but was still well ahead of the USA’s, hence no surprise kiosks appeared in France first, the UK second, and are a relative latecomer to the United States.

If the technology was “going to happen anyway,” as Fight for $15 proponents claim, hundreds of thousands or possibly over one million fast food cashier positions would have been eliminated in the USA over a decade ago since kiosks were already common in Europe.

But they weren’t, because the cost of low-skilled American labor remained lower than the cost of capital all that time. Had the U.S. minimum wage been raised to $15-per-hour in 2004 those million-plus jobs would have quickly been eliminated and stayed nonexistent for the last seventeen years, along with all the wages that came with them. And minimum wage advocates would have been claiming back in 2004 that “it was going to happen anyway.”

But what we know from the hindsight of 2004-2021 is that it wasn’t “going to happen anyway” after all. Hundreds of thousands of human cashiers are still here working although their numbers are dwindling with each regional minimum wage increase.

Perhaps 10 or 20 years from now the cost of self-order kiosks will fall far enough to outcompete even $7.25/hour labor, but clearly the state of the technology hasn’t yet reached that level. If it had there wouldn’t be a single human cashier left working at any restaurant in the United States.

“Dating back to as early as 2004, locations around France started to see the implementation of these automated food ordering systems.”

“McDonald's Europe strikes another blow against human interaction by installing 7,000 touch-screen computers to take your order and money.” (2011)

“Over 90% of McDonald's restaurants in France now boast the ordering kiosks, said execs on a call with analysts Oct. 22 [2016]”