2 MIN READ - The Cautious Optimism Correspondent for Economic Affairs and Other Egghead Stuff would like to remind the G7 finance ministers that price-fixing and collusion is illegal in their countries. 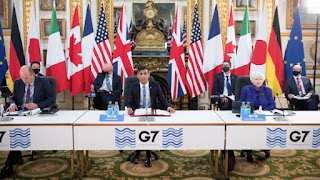 If CEO #1 calls competing CEO #2 and they casually mention raising prices by one dollar they can both be prosecuted and go to jail since firms setting price floors (ie. minimum prices) is a violation of antitrust and competition laws.

The G7 governments claim absent their recent cartelization efforts revenues have undergone what Yellen calls a "30-year race to the bottom on corporate tax rates" where nations have competed to attract companies by offering better deals than the other guy.

But when companies compete for customers by relentlessly innovating and lowering costs the Correspondent has never once heard a G7 finance minister complain about the “250-year race to the bottom” for inflation-adjusted consumer prices and suggest price floors need to be set other than minimum wages.

Competition is a good thing and must be encouraged—under penalty of prosecution, fines, and jail time—unless it lowers governments’ tax revenues in which case it must be squashed. Governments shouldn’t be inconvenienced by competitive market forces that entrepreneurs have to deal with every day.

"Companies will no longer be in a position to dodge their tax obligations by booking their profits in the lowest-tax countries." - German Finance Minister Olaf Scholz.

"This is a starting point and in the coming months we will fight to ensure that this minimum corporate tax rate is as high as possible." -French Finance Minister Bruno LeMaire.

In other news, the seven largest U.S. retail grocery store chain CEO's announced they have agreed to set a minimum price for eggs at $10 per dozen.

"Consumers will no longer be in a position to dodge their obligations to us by buying their eggs at the lowest priced store," Kroger CEO Rodney McMullen said.

"This is a starting point and in the coming months we will fight to ensure that the minimum price for eggs is set as high as possible," exclaimed Safeway CEO Robert Miller.