7 MIN READ - The Cautious Optimism Correspondent for Economic Affairs and Other Egghead Stuff, having concluded the first half of his series on free vs regulated banking in Great Britain, will give readers a “break” from banking history with something a little more current events: a new series on the economics and fallacies of minimum wage with a focus on “Fight for $15” proposals. 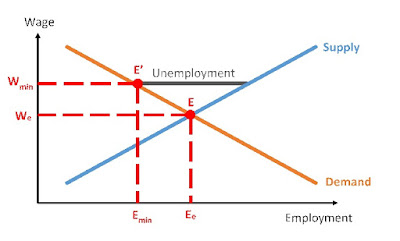 The Economics Correspondent is fairly active reading CO’s posts and comments and in his estimation most CO Rockers generally “get” the problems and negative consequences created by governments imposing wage floors above market equilibrium wages for low-skilled labor. But he thought that some econ nerds of the CO world might unite finding more detailed economic theories, history, empirical evidence, and even a few anecdotes interesting reading.

In the next two columns we’ll focus primarily on “Marginal Revenue Product,” a concept that, once established, provides a great deal of insight into consequences and fallacies of minimum wage.

Aside from the obvious law of demand—which states the higher the price of a good or service the lower the quantity purchased—economists frequently employ the concept of Marginal Revenue Product to analyze the effects of minimum wage.

Marginal Revenue Product is a mouthful, so going forward we’ll refer to it by its customary abbreviation of MRP.

It’s probably self-evident that workers with few to no marketable skills have low MRP while those with high skills have higher MRP.

In more complex real world scenarios MRP may apply to a small group of new hires since it takes more than one employee to secure any marginal revenue at all. For example, a new international long-haul airline route won’t bring in a dollar of additional revenue with the hiring of a single marginal flight attendant. It requires several of them, two cockpit crew members, and marginal additions to ground personnel, gate agents, etc… before the marketable product—an additional flight—can be offered to the public and begin attracting even a single new dollar of sales.

So let's take an extra sandwich artist at Subway, given the sporadic frequency of customer orders and arrivals throughout the day, who might only produce $10 per hour in MRP. Meanwhile a skilled doctor seeing several patients a day may be able to produce $150 per hour in MRP.

At the extreme NFL quarterback Tom Brady, given the number of ticket holders and viewers he can attract by doing his job, may be able to produce $10,000 per hour in MRP.

It all has to do with how much money the extra worker’s skills and labor can entice customers to hand over to the company.

So moving to the obvious next analytical step, if the least-skilled sandwich artist at Subway has an MRP of $10 per hour, odds are good that he will be hired or remain employed in a state with a minimum wage of $7.25 per hour. But if the state raises the minimum wage to $15 per hour and the employee’s MRP doesn’t rise accordingly, hiring or retaining him becomes an instant moneyloser—at least $5 per hour in losses.

Important side note: Some readers may say “Hey, $15 an hour in revenue at Subway isn’t that difficult to secure. Just serve two customers, each of whom pays $7.50, and the employee’s MRP is $15 per hour. Problem solved.”

But remember that MRP refers to marginal revenue that the worker’s *labor* produces, not the revenue the entire enterprise produces.

A clerk at Walmart’s TV department can sell three TV’s a day for $1,200 but that doesn’t mean his MRP is $1,200 a day, and it doesn’t mean Walmart can afford to pay him $1,000 per day or $250,000 per year. Walmart had to deliver the customer something more than just the employee’s labor to secure $1,200 in sales: namely three televisions plus other cost factors. Hence the total cost of securing marginal revenue—labor plus wholesale, capital, marketing, interest on borrowing, etc.—includes “Marginal Factor Cost,” a concept we’ll examine in future columns.

Although minimum wage fallacies are overwhelmingly committed by its proponents, the first fallacy MRP helps us dispel is the rare one more commonly made by minimum wage opponents.

But future columns will be dominated by pro-minimum wage fallacies.

We often hear the claim made that “If the minimum wage is raised to $15 per hour, there will be a disastrous surge in the unemployment rate as countless millions are laid off.”

While that might be true during major downturns like the Great Depression, such a sweeping generalization rarely plays out, particularly in strong economic recoveries.

While some workers will lose their jobs if the minimum wage is raised to $15 per hour, the reality is that only a small segment of the overall workforce will be impacted. Unfortunately that segment contains the most vulnerable members of the labor force: those with low skills.

A. An unemployed teen with zero skills whose MRP is $5 per hour.

B. The aforementioned Subway worker whose MRP is $10 per hour.

Remember, these aren’t salaries but rather the amount of revenue their labor can bring in for their employers.

Under the current federal $7.25 per hour minimum wage, employees B, C, and D are gainfully employed since their MRP’s are greater than the minimum wage.

But employee A is and has already been chronically unemployed because he simply can’t generate a marginal $7.25 an hour for an employer due to his lack of skills.

Now in a new scenario the federal government mandates a minimum wage of $15 per hour.

Employee B, whose MRP of $10 per hour made him employable at $7.25 per hour, is now a moneyloser at $15 and almost certainly loses his job (more on variables surrounding B’s fate in Part 2).

However employees C and D are still gainfully employed because their MRP’s were previously and still remain far above $15 per hour.

Thus some of the most vulnerable members of society are hurt by a higher minimum wage while the jobs of the better off are mostly unscathed.

The Economics Correspondent doesn’t have immediate access to the number of American workers earning between the current minimum wage in their state and $15 per hour, but he suspects that the total represents a minority of America’s total workforce albeit a more sizable minority than during past, less aggressive minimum wage hikes.

If the minimum wage is raised to $15 per hour in the middle of a brisk economic recovery the bulk of over-$15 MRP workers will gainfully find jobs while low-skilled workers will fare much worse.

But since there are far more workers with over-$15 MRP than those between $15 and $7.25 (or whatever their local minimum wage might be) the final calculus nationwide will still produce an overall reduction in the unemployment rate.

This could lead to the pro-$15 per hour crowd committing their own fallacy in turn: pointing to the falling unemployment rate and declaring “See, the higher minimum wage didn’t hurt anyone!”

One last note about the employee whose MRP is above $15 per hour.

We mentioned previously that the wage hike tends to affect only those employees whose MRP’s are below $15. However, it is still possible for a small number of employees with higher MRP to be hurt also.

Consider if a nationwide minimum wage hike results in 10% of a fast food company’s nationwide staff being laid off or replaced by machines. While the low-skilled employees feel the brunt of the pain, the company also now has less need for support staff in HR, building or equipment maintenance, payroll, etc… So a handful of higher-skill workers with MRP’s above $15 an hour can still become collateral damage and find themselves fired.