6 MIN READ - For some time the Cautious Optimism Correspondent for Economic Affairs and Other Egghead Stuff has posted on the contrasting regulatory frameworks of the historically unstable banking systems of England (16 bank panics in 194 years) and the United States (17 panics in 216 years) against the nearly laissez-faire deregulated system of Scotland (zero panics in 129 years).

Now the Economics Correspondent begins the last chapter of the series with a final handful of articles on the exceptional performance and stability of Canada’s 118-year free banking era. 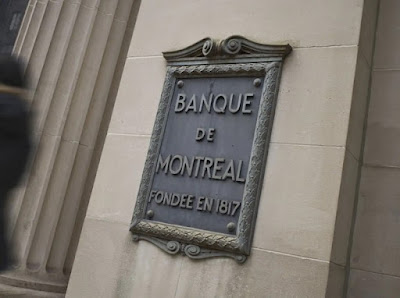 So far the Economics Correspondent has devoted a great deal of writing to explain the many destructive, perverse, and downright bad American bank regulations that contributed to its roughly seventeen bank panics going back to 1792.

By contrast Canada, which had the most deregulated banking system in the industrialized world from 1845 to 1935 (and second-most deregulated from 1817 to 1845) experienced no panics at all during its “free banking” period.

Much less penmanship is required to explain Canada’s success, for describing what Canada didn’t do (tie its banks’ hands in destructive ways) doesn’t take as long as dissecting the United States’ long chain of pernicious and destabilizing regulations or the chronologies of its multiple financial crises.

Because Canada had very little of the first and none of the second.

Nevertheless, a very simplified overview of Canada’s banking industry and history does provide some insights.

THE BANK OF MONTREAL

During Canada’s early years of French colonization (1534-1763), money was a vague and undefined commodity. Aside from barter, attempts at a common medium of exchange included wheat, wampum (shell beads), beaver pelts, and moose skins.

These attempts at functioning monies were generally unsatisfactory since wheat and shell beads are not uniform, homogenous, or durable, and beaver pelts and moose skins are not divisible or uniform. French traders even famously tried using playing cards as money with equally unsatisfactory results.

As was the case in other western societies, coins minted from rarer metals eventually found their way into Canada, mostly higher denomination French coins from the West Indies, Spanish silver dollars minted in Mexico, and copper coins for low denomination transactions.

The French crown briefly authorized the colonial government to issue currency “cards” that could be traded for bills of exchange which in turn were redeemed for silver in France.

The new card money was initially successful, but the colonial government soon began printing “Treasury notes” alongside the cards, and upon entering the French-Indian War with Great Britain (1754-1763) quickly ended convertibility and overissued the notes leading to inflation.

At the war’s conclusion Quebec changed hands to become the British Province of Quebec, later “British North America,” and by the early 19th century commerce in cities and towns was being conducted with a hodgepodge of gold, silver, and copper coins of varying weights from different countries.

It was at this point that a group of nine merchants met in Montreal to discuss the idea of a bank of deposit and issue that could supply uniform paper currency to the local region.

The idea was not novel. By then a few hundred banks in the independent United States were already accepting gold and silver coin deposits, issuing paper banknotes, and even crediting deposit accounts to make commercial exchange less cumbersome—all instruments we take for granted today (less gold convertibility).

And commercial banking with private note issuance had already been conducted in Great Britain for well over a century.

Hence the merchants petitioned the Parliament of Lower Canada for a charter. The charter was slow in coming so the merchants decided to open without one in 1817, signing the Articles of Association founding the Bank of Montreal in a rented house.

Of the nine founding directors, a majority (five) were Scottish or of Scottish descent including John Richardson, known as the “Father of Canadian Banking.” A majority of Scots was no coincidence—something we will revisit in a later column. The other four included one Frenchman, two Americans, and one Englishman.

A charter for incorporation followed in 1822. The bank accepted deposits in gold and silver coin, issued banknotes and deposit accounts in exchange, extended interest-bearing loans in the form of notes and deposits, and discounted securities.

The arrival of uniform cash made conducting commerce in Montreal and surrounding areas much easier, and large commercial transactions could now be conducted at the bank instead of through schlep: the cumbersome process of hauling heavy bags of coins across town to make a large payment.

Word of the Bank of Montreal’s success quickly spread, spurring a small wave of new bank startups. In a few short years several new banks were chartered, many of whose names have been forgotten—either by failure or more commonly by acquisition—including:

But of particular note was the creation of a new bank in Halifax, Nova Scotia.

The privately owned Halifax Banking Company was founded in 1825, but with only a handful of private partners to fund its startup capital its regional benefit was limited.

The Legislative Assembly of Nova Scotia felt a larger public bank, funded by shares sold to the public, would better serve the colony and was amenable to providing a charter, but the Halifax Banking Company’s directors insisted on a government-granted provincial monopoly.

In a key difference between the early days of American and Canadian banking, the Nova Scotia Assembly refused to grant a monopoly and the Bank of Halifax went on operating as a limited private partnership.

This stands in stark contrast to the American states of the 1800’s which were granting literally hundreds of local bank monopolies in exchange for bank favors, or of the U.S. federal government that bestowed an interstate branching monopoly upon its two antebellum central banks—the Bank of the United States and Second Bank of the United States—to carry out Washington, DC’s monetary policy.

Nova Scotia still lacked a large regional bank, but a few years later a group of merchants founded the Bank of Nova Scotia which opened as a publicly-owned bank, issuing shares of stock via the 1832 equivalent of an IPO. The Bank of Nova Scotia’s directors didn’t ask for a government monopoly, the bank received its charter, and a new, more heavily-capitalized competitor emerged in the Canadian market.

The Bank of Montreal and Bank of Nova Scotia remain two of Canada’s largest banks today, known to Canadians as BMO (“bee-mo”) and Scotiabank.

The story of Scotiabank’s founding is informative as it establishes an example of a pattern that was to follow for decades to come: All through the early period of Canada’s bank startups, no special government privileges were granted to Canadian banks nor were their business activities handtied by onerous regulations—although a few regulations policing fraud and insider conflicts of interest were applied.

Of particular note was branching. While in the United States state governments universally prohibited the branching of any bank into any state other than its home state, and frequently restricted branching to only two or three counties or no branches at all, Canadian banks were free to open branches wherever they wanted. It wasn’t long before most Canadian townships were served by competing bank branches operating from headquarters in Halifax, Montreal, or Toronto.

Around the time of Canadian confederation (1867), when Canada was granted self-government by Great Britain as an independent Commonwealth nation, a few other notable banks were founded.

In 1864 the Royal Bank of Canada was chartered which, through organic growth and acquisitions, grew into what has until recently been Canada’s largest bank.

Two more banks, the Bank of Toronto and the Dominion Bank, were founded in 1855 and 1869 respectively and merged in 1955 to form the Toronto-Dominion Bank which has recently overtaken Royal Bank as Canada’s largest.

(note: RBC and TD have been leapfrogging over one another for the #1 position for the last few years, depending on whether one measures rank by assets, deposits, market capitalization, etc…)

East coast and midwestern Americans may have noticed the presence of Canadian banking expansion into the U.S. market in recent years, as RBC and TD branch offices have cropped up along the Atlantic coast states and southeast while BMO Harris has a large Midwest presence.

Scotiabank has a tradition of expansion into Latin America while CIBC has remained a predominantly domestic operation.

However, considering Canada only has 11.3% the population of the United States and 7.9% the gross domestic product, the relative size of its banks but absence of any banking crises are yet more testament to the stability and success of the industry.

In Part 2 we will look closely at more regulations Canadian banks were never subjected to (and American banks were) which helped them completely avoid banking panics throughout the industry’s 205-year history.