Are Fiscal Deficits and Debt Worse Under Republicans? (Part 1)

4 MIN READ - Partisan economics from the Cautious Optimism Correspondent for Economic Affairs and Other Egghead Stuff.

So with midterm votes still being “counted” and anyone questioning how long results are taking being called an election denier, there’s still a shrinking window of opportunity for the GOP to gain control of the House of Representatives. Should the Republicans secure a majority, however small, budget battles with the Biden White House will inevitably erupt and we might even see a government shutdown somewhere in the next two years.

And once the disagreements begin we’ll without doubt hear budget rhetoric from all directions including this old classic that the Economics Correspondent has seen in various forms more times than he can count:

“Deficits soar under Republican presidents and come down under Democrats.”

“Reagan, Bush, Bush Jr, and Trump ballooned the deficit while Obama cut the deficit in half and Clinton gave us a surplus.”

“Republicans claim to be the party of fiscal discipline but they’re not. Reagan ran up a huge debt and Clinton balanced the budget.”

And they’ll probably include simple shock visuals like these: 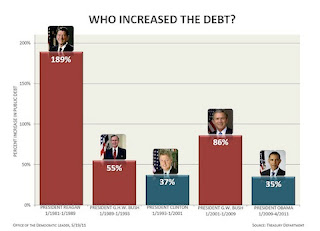 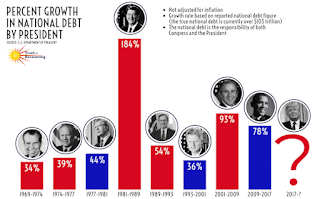 While the Economics Correspondent won’t argue with some of the literal claims made in these quotes or charts, other than perhaps…

2) Obama and Biden both slapped on huge spending packages their first years and ballooned the deficit so they could take claim for “drastically reducing” the deficit years later.

…the real 800-pound-elephant-in-the-room which marginalizes the entire “deficit by president” thesis is completely missing: the actual fiscal branch of government (Congress).

After all, the U.S. Constitution grants Congress the exclusive power of the purse: the “Power To lay and collect Taxes, Duties, Imposts and Excises, to pay the Debts and provide for the common Defence and general Welfare of the United States... … To borrow Money on the credit of the United States”

The Constitution grants no such powers to the President who can only draw up his/her own budget and hope Congress adopts some of the measures.

So you would think it’s a bit strange the Democrats/liberals/socialists not only are always pointing fingers at Republican *presidents* for budget malfeasance, but that it’s even more unusual they are completely silent on the branch of government that really matters when it comes to fiscal matters: Congress.

Well one only need look at the data to understand why.

Deficits and the growth of the debt under Democratic Congresses are larger by multiples than under Republican ones.

What data support this claim?

Well first let’s establish the tricky business of measuring debt and deficits over several decades. Simply looking at nominal dollar numbers and adding them up isn’t useful because, as previously mentioned, a $200 billion deficit in 1982 was three times larger as a share of GDP than $500 billion is today.

So the best measure is to record four decades of deficits or surpluses as a % of GDP every year that Democrats have controlled both houses of Congress, and the same when Republicans have had full control.

Therefore if we go back to 1980 as Jimmy Carter was about to lose the White House to Ronald Reagan, and measure through 2022, whose fiscal year just ended last month, we get the following results.

Split control of Congress is so much more complicated that it’s not worth pinning on one party or another. However, the data show that in the twelve years that Democrats and Republicans have split the two houses of Congress (1981-1986, 2011-2014, 2019-2020) budget deficits have been the worst of all, averaging 5.70% of GDP.

Finally, the Economics Correspondent has posted these numbers online before, to which liberal posters who had previously condemned Republican presidents have quickly retorted “Well there’s more to it than just those Congressional numbers. For example Democrats were in charge of Congress during the 2008 Financial Crisis which blew a hole in the budget, something they had no control over.”

Well “no control over that” is true, but if we’re going to take circumstances beyond a Congress or president’s control then we also have to consider (which they once again ignore):

-When Donald Trump ran a huge deficit in 2020 as the economy was shut down and not generating tax revenue and the federal government was borrowing trillions for Covid stimulus spending, the then Democratic Congress blocked his stimulus packages unless additional moneys were added for gender studies in Pakistan, Cambodia, Guatemala, Costa Rica, and Burma, renovating the Kennedy Center, “race riot studies,” the construction of Latino and Women’s history museums, tens of billions more for state/local transportation systems and Amtrak, grants for block universities and “live entertainment venues” like New York’s Broadway, expanded private Internet access… the list goes on and on.

-Other mitigating factors include every country on earth was hit by Covid and they virtually all ran large fiscal deficits as well, the spread of Covid ultimately proving to be beyond any country’s ability to control.

But what’s most telling of all is when lefties post broad indictments like “Republican presidents always run up the debt” there’s absolutely zero room for nuance or detailed causes in their discussion.

They’re faced with an equally broad counter like “Democratic Congresses always run up the debt even faster” at which point they suddenly discover an interest in refined cause and effect or searching for answers deeper than soundbites.

That they knew all along that there were more nuanced explanations and details but deliberately withheld them when posting meme bombs, and only pulled out specifics when confronted with factual counters, speaks volumes in and of itself.