Does the Economy Perform Worse Under Republicans? (Part 2)

4 MIN READ - Another round of partisan economics from the Cautious Optimism Correspondent for Economic Affairs and Other Egghead Stuff. 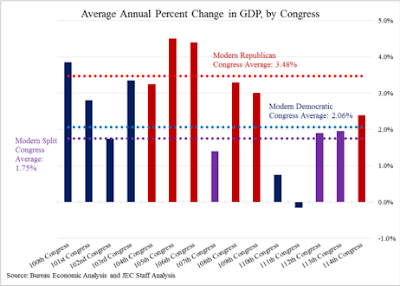 In the Economics Correspondent's personal experience those who argue “the economy is better under Democratic presidents” once again instantly discover the need to discuss nuance and detail when confronted with the logical counter: “the economy fares far better under Republican Congresses.”
The Economics Correspondent has frequently seen rapid pivots to “well that's only because” backdoors like “Well Democratic Congresses had to clean up a recession that Bush Sr. and Bush Jr. left them. That’s why GDP growth and unemployment aren’t that great for Democrats."

But as always, “the other party left us with” argument can be applied both ways.
For example: “Ronald Reagan had to clean up the mess Jimmy Carter and literally 26 years of total Democratic Congressional control left him.”
Or “George W Bush and the Republican Congress had to clean up the recession Bill Clinton left behind as he departed office.”
Or using their same logic, even: “The Republican Congress had to clean up the 2008 Financial Crisis and Great Recession that began under a Democratically controlled Congress.”
But just as the Economics Correspondent explained in his Part 1 column, Democratic-leaning/liberal/socialist commenter meme bombs about Republican presidents overseeing inferior economic growth are virtually always absent any specifics, details, and of course mention of Congress.
It's only when confronted with a retort about economic growth being far superior under Republican Congresses that they suddenly claim the circumstances are more complex than soundbites and insist multiple factors need to be analyzed more closely.
Unfortunate that they’re not willing to disclose things are a little more complicated in the real world until the conversation turns against the first narrative.
====
(from the Economics Correspondent) Source data:
1) Real GDP growth by year: St. Louis Federal Reserve and U.S. Bureau of Economic Analysis
https://fred.stlouisfed.org/graph/?g=WehT
2) Real GDP growth by Congressional party control: U.S. Senate Joint Economic Committee
https://www.jec.senate.gov/public/_cache/files/517f4127-044f-46fb-a008-dcfa26e2b94d/033116figure-1-homefeaturedlarge.png
3) Unemployment rate by year: St. Louis Federal Reserve and Bureau of Labor Statistics
https://fred.stlouisfed.org/graph/?g=WqfH
4) Party division/control of Congress by year.
https://en.wikipedia.org/wiki/Party_divisions_of_United_States_Congresses#Party_divisions_by_Congress