Does the Stock Market Perform Worse Under Republicans? And Does Political Party Even Matter?

5 MIN READ - The third and final look at economic performance by political party from the Cautious Optimism Correspondent for Economic Affairs (and Other Egghead Stuff). 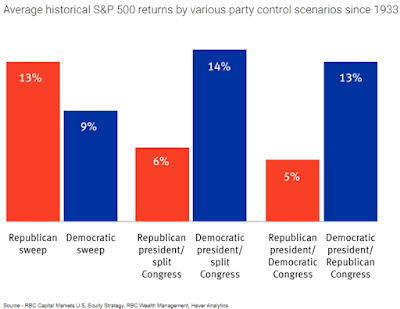 In case you missed it, the Economics Correspondent has already countered the common arguments that “Republican presidents rack up more deficits and debt” and “the economy performs better under Democrats,” pointing out that fiscal and economic performance is far superior when Republicans control Congress over Democrats at:

Now we look very briefly at the last of those drive-by partisan bombs. Namely, that superior stock market performance is credited to Democratic presidents.

Once again, the Economics Correspondent has lost count how many times he’s seen, in one form or another:

“The stock market does much better under Democratic presidents.”

“We had one of the best stock markets of all time under Bill Clinton.”

“George W. Bush collapsed the stock market and Obama pushed it up to new records.”

Once again contradictory evidence is omitted such as: the huge bull market of the 1980’s under Reagan is left out of the conversation as is the so-far tepid performance of the market after two years of Biden (DJIA +4.98% annualized).

But most importantly, yet again, the “Democrats give us better stock markets” claims ignore performance by Congress, the branch of government that controls taxes, spending, borrowing, and passes regulatory legislation.

The data going back to 1980 confirm the “better under Democrats” thesis.

-During the 24 years under Republican presidents the S&P 500 index grew an average of 5.6% per year.

-During the 18 years under Democratic presidents the S&P 500 index grew an average of 11.9% per year.

But if we flip the script and look at stock market performance depending on Congressional Party control the numbers change considerably.

Fortunately for us, RBC Wealth Management (Royal Bank of Canada) has done the Congressional research and collected stock market indices data going back to 1933! They’ve calculated stock market performance when Democrats have total control of the White House and Congress and the same for Republicans (chart attached).

Once again, the focus here is on performance depending on who controls Congress (chart attached).

Split control of Congress is more ambiguous but it's a subset of Democratic presidents faring better (see RBC’s chart).

PARTISAN COMPARISONS MATTER A LOT LESS THAN THE FED

Up until now the Economics Correspondent has stressed that there are actually nuanced causes for economic performance, often reaching far beyond which party controls the White House or Congress, and that liberal online posters who flood the web with simplistic “Democrats perform better with the federal debt/economy/stock market” ignore those nuances.

And although “Republican Congresses do even better across the board than Democratic presidents” is also true and nuanced, there is really one giant institution that exerts far more influence over the economy, the stock market, and to a lesser degree the national debt than Republicans or Democrats.

In the remaining paragraphs the Economics Correspondent can only ask CO Nation to accept he has studied and monitored the impact of Fed monetary policy on the economy for many years, and history clearly informs us that the last century’s major recessions, soaring stock market bubbles, and crashing stock bear markets are virtually always triggered by monetary policy and almost never by the machinations of presidents and Congresses.

The Correspondent has prepared this St. Louis Fed chart to illustrate.

Note the pattern of the last 70 years. Every time the Fed jacks up interest rates after a period of low rates (blue line) a recession usually follows within 12-18 months (grey shaded areas).

So if you’re unlucky enough to be a president or Congress when the Fed sparks another recession, your party’s batting average will be kneecapped by sharply falling GDP, stock prices, and rising unemployment.

And during that recession falling tax revenue and increased government spending on unemployment assistance (and under Democrats, additional Keynesian “stimulus spending”) will lower your batting average for managing fiscal deficits.

Feel free to line up who was president at each of those grey shaded recessions.

WHEN DO WHITE HOUSES AND CONGRESSES MATTER THE MOST?

One last comment about the Fed’s impact on the economy versus the federal government’s.

History has taught the Economics Correspondent that the machinations of presidents and Congresses have rarely plunged economies into recession. Although it’s possible for a crazy enough politician (look at Hugo Chavez) to do it without a central bank, so far in the USA it’s been rare – save Bernie Sanders becomes president with AOC House Speaker.

However one area where presidents and Congresses have historically made a huge impact is when economies are struggling to recover from recessions.

A detailed study of recoveries after the initial crashes during the Great Depression, the Great Recession, and other slumps like the Depression of 1920 and 19th century depressions informs us that once an economy is on the ropes, it can recovery quickly and strongly or it can limp along for years—all depending on not only what the central bank does (if there is one), but also greatly on whether a White House or Congress screws things up even more.

There’s too little space to go into each case here, but a few short examples include:

During the Depression of 1920, President Warren Harding and Congress did virtually nothing (other than slashing the federal budget) and full employment was restored in two years.

And in the 19th century, when federal recession policy was nearly laissez-faire, economies typically recovered in two or three years with the absolute longest delay to full employment after the Panics of 1839 (four years) and 1896 (four years).

By contrast after the stock market crash of 1929 the Hoover and FDR administrations intervened to “fix” the economy at an unprecedented rate in American history – doubling the level of real government spending, raising tax rates by over 150%, initiating an international tariff trade war, spreading price and wage controls through the economy – and it took 17 years to return to private sector full employment.

The next most interventionist recovery in U.S. history was after the 2008 financial crisis – with massive bank bailouts, QE1, QE2, QE3, years of zero interest rates, trillions in deficit stimulus spending, the enactment of Obamacare and thousands more regulations – and the recovery to full employment was the second slowest in American history at seven years.