Who Has Taiwan Traditionally "Belonged" To?

4 MIN READ - Other than the dismal science, the Cautious Optimism Correspondent for Economic Affairs and Other Egghead stuff is a modest student of Chinese history. The following is a brief history of Taiwan’s official relations with China. 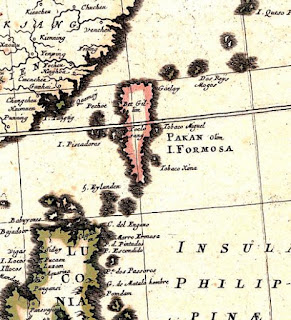 No matter what one thinks of Nancy Pelosi’s recent visit to Taiwan or the U.S. government’s position on Taiwan independence here are some interesting facts about who Taiwan has “belonged to” over the centuries.

As most people know Chiang Kai-Shek’s Nationalist government retreated to Taiwan in 1949 after losing the Chinese civil war against the communists. 2 million Chinese crossed the strait to live among 5.9 million native Taiwanese, most of whose ancestries were rooted on the island for centuries.

Taiwan has subsequently been governed from Taipei for the last 73 years.

Meanwhile the Chinese Communist Party emphasizes that Taiwan is still “an inalienable part of China,” and Chinese state-run media repeatedly reports Taiwan has been part of China going back to the dynastic period.

Of course we know Taiwanese don’t want to live under communist rule, but given Beijing’s version of history how could those stubborn islanders not at least recognize that Taiwan is part of China?

Let’s go back a little further in time.

PRE-CIVIL WAR AND THE DYNASTIES

Before the Chinese civil war broke out in 1945, Taiwan had been a Japanese colony for 50 years (1895-1945), only having been handed to the Nationalist government upon Japan’s World War II surrender.

During the 19th century, when the rising Japanese military crushed a larger Chinese imperial force in the first Sino-Japanese war, the Treaty of Shimonoseki (1895) ceded both Korea and Taiwan to Japan which in turn modernized the island.

So the initial math says for 123 of the last 127 years Taiwanese have had a pretty good reason to think they are not part of China. Because they’ve been governed by someone other than China.

Going back further across two thousand years of Chinese dynastic rule, none of the dynasties ever showed interest in conquering, ruling, or governing Taiwan until the very last one: the Qing dynasty (1644-1911, pronounced “ching”).

The Qing were actually not even Chinese but rather Manchurians who successfully invaded China from outside (hence they are also referred to as the Manchu dynasty) and were hated by native Chinese as alien rulers for their 267 year reign.

The Qing only reluctantly went to Taiwan to eliminate the last vestiges of holdout loyalists from the previous dynasty, the Chinese Ming (1368-1644), who had retreated to the island upon defeat.

Even the great Qing emperor Kangxi himself (pronounced “kahng-shee”), who sent his forces to Taiwan to wipe out Ming loyalists, declared Taiwan was "a ball of mud beyond the pale of civilization.”

In 1683, the year the Ming loyalists were defeated, Kangxi stated “Taiwan is outside our empire and of no great consequence,” and later tried to sell it back to the Dutch who refused.

Before the Qing the Ming also didn’t recognize Taiwan as Chinese territory and told Dutch traders to “go beyond our territory,” kicking them off the mainland to establish a base on the island.

Or stating the inverse, Taiwan has not been governed or even officially “part of China” for 2,027 of the last 2,243 years.

Perhaps one can see how Taiwanese, particularly the majority whose bloodlines are native to the island, don’t see themselves as part of China and many don’t even consider themselves Chinese.

But what about the Chinese Communist Party? They’re the ones in charge of China today. So haven’t they felt more kindred affection for their Taiwanese countrymen than the old imperial dynasties?

The Correspondent remembers reading twenty years ago that Mao Zedong, the founder of the People’s Republic of China, never once called Taiwan part of China in any of his writings or speeches up until the civil war, but can’t remember the book he read it in.

The Chinese Communist Party was founded in 1921 and quickly merged into the larger Nationalist Party.

Suspicious (and later proven correct) that the communists were operating under orders from the Soviet Union to subvert the Nationalist Party from within and rule China themselves, Chiang Kai-Shek violently purged the communists in 1927.

Those CCP members who escaped the purge formally split off and officially rewrote the new communist political platform:

From 1928 to 1943 the CCP’s official position on Taiwan recognized the island as a distinct “nation” and “nationality.”

In a 1937 interview with American journalist and communist sympathizer Edgar Snow, Mao Zedong (then hiding from Chiang Kai-Shek’s forces) stated “…we will extend them (the Japanese-occupied Koreans) our enthusiastic help in their struggle for independence. The same thing applies for Taiwan.”

For many years after future Chinese Premier Zhou Enlai reiterated the CCP’s position on granting independence to Taiwan, writing as late as 1941 that "We should sympathize with independence-liberation movements of other nation-states" of which he named "Korea or Taiwan," "the Balkan and African nations," and "India and various South Asian countries."

It was only near the end of World War II, when it became clear civil war was about to break out again, that the Communist Party changed its position and declared Taiwan to be part of China.

Today, cynical Taiwanese and observers outside China theorize that Beijing is concerned far less with Taiwan’s legal status or a fraternal union with the islanders than its strategic value, and the Economics Correspondent agrees.

Beijing wisely views Taiwan as an “unsinkable aircraft carrier” that they don’t control—and therefore view as a threat—even though China has an enormous army and nuclear weapons.

Also as has been widely reported Beijing has claimed the entire South China Sea as its own territory, building artificial islands with military ports and airbases while its coast guard and navy harass, hose down, ram, and even sink non-Chinese commercial vessels and fishing boats for infringing on Chinese sovereignty.

It's not lost on the world that 40% of all global commercial shipping passes through the South China Sea which Beijing wishes to control. And seizing Taiwan would allow Beijing to also push its claims out into the Philippine Sea lanes that connect Japan, South Korea, and eastern Russia to the 85% of the world’s population not living in the western hemisphere.