A Look Back at Two Decades of Paul Krugman Predictions 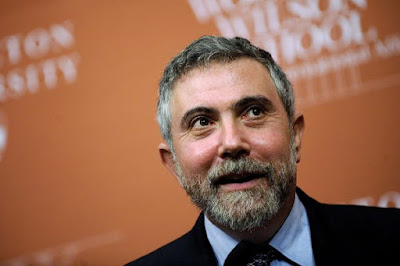 6 MIN READ - With New York Times columnist Paul Krugman recently telling CNN that the USA is not in recession and the word doesn’t matter, the Cautious Optimism Correspondent for Economic Affairs and Other Egghead Stuff feels now is a good time to look back on some of the Nobel laureate’s previous predictions... with a little color analysis.

While this list is comprehensive enough to illustrate Krugman's batting average it’s far from complete. At first the Economics Correspondent did try to gather more of Krugman’s career mistakes but received an email from Facebook’s data center staff complaining it was draining too many exabytes of storage capacity from their main campus servers.

So about two dozen quotes will have to do.

Brian Stelter: “Are we in a recession and does the term matter?"

Krugman: “No we’re not and no it doesn’t… …What does it matter whether you use the ‘r’ word or not?”

"By 2005 or so, it will become clear that the Internet's impact on the economy has been no greater than the fax machine's."

“During phases of weak growth there are always those who say that lower interest rates will not help. They overlook the fact that low interest rates act through several channels. For instance, more housing is built, which expands the building sector. You must ask the opposite question: why in the world shouldn’t you lower interest rates?”

"It’s still not clear that Mr. Greenspan has caught up with the curve—let’s have at least one more rate cut, please—but the interest-rate cuts do, cross your fingers, seem to be having an effect."

“Meanwhile, economic policy should encourage other spending to offset the temporary slump in business investment. Low interest rates, which promote spending on housing and other durable goods, are the main answer.”

“The good news about the U.S. economy is that it fell into recession, but it didn’t fall off a cliff. Most of the credit probably goes to the dogged optimism of American consumers, but the Fed’s dramatic interest rate cuts helped keep housing strong even as business investment plunged.”

“To fight this recession the Fed needs more than a snapback; it needs soaring household spending to offset moribund business investment. And to do that, as Paul McCulley of Pimco put it, Alan Greenspan needs to create a housing bubble to replace the Nasdaq bubble.”

(Correspondent comment) History now records the Fed inflated a historic housing bubble which burst and took the banking system down with it, precipitating the Great Financial Crisis of 2008 and the Great Recession.

So when some people went back and found Krugman’s many columns urging the Fed to inflate and stimulate housing *even more* he responded:

"Guys, read it again. It wasn’t a piece of policy advocacy, it was just economic analysis. What I said was that the only way the Fed could get traction would be if it could inflate a housing bubble. And that’s just what happened."

Sure, all those quotes from 2001 and 2002 weren't "policy advocacy." Krugman just wrote again and again that the Fed should cut rates further to stimulate housing but never really meant it (smh).

And all topped off with…

"To be honest, a new bubble now would help us out a lot even if we paid for it later. This is a really good time for a bubble… …There was a headline in a satirical newspaper in the US last summer that said: 'The nation demands a new bubble to invest in' And that’s pretty much right.”

5) U.S. BANKS DURING THE CRISIS

In early 2009 Krugman called for the federal government to take over much of the U.S. banking industry Sweden style.

"The case for nationalization [of US banks by the federal government] rests on three observations... ...There’s a reasonable chance — not a certainty — that Citi and BofA, together, will lose hundreds of billions over the next few years. And their capital, the excess of their assets over their liabilities, isn’t remotely large enough to cover those potential losses…"

“…Still, isn't nationalization un-American? No, it's as American as apple pie.”

(Correspondent’s comment) Two weeks after his column Citigroup and Barclays announced surprise profits and bank stocks soared, never looking back. A few months later Krugman wrote a column complaining that bank profits were too large and creating too much wealth inequality.

(Right before the financial crisis)

“… tales of a moribund Europe are greatly exaggerated. … The fact is that Europe’s economy looks a lot better now—both in absolute terms and compared with our economy.”

(After the financial crisis and during the ensuing eurozone crisis)

“'Greece will leave eurozone within 12 months"

“The Euro collapse is imminent”

“I think I can say without false modesty, a huge win; I (and those of like mind) have been right about everything.”

“Britain will continue on a death spiral of self-defeating austerity.”

(Correspondent’s comment) In the four years after Krugman’s column the UK’s real GDP grew by 2.4% per year and unemployment fell 3.1 points to full employment.

Not stratospheric growth but clearly not a death spiral, and better than the USA’s real GDP growth rate of 2.1% during the same period under Barack Obama (whose policies he credited for the U.S. recovery).

“The repeated invocation of Ireland as a role model has gotten to be a sick joke.”

-“Ireland is the Success Story of the Future, and Always Will Be.” August, 2013

-“The Neverending Irish Success Story.” May 2013

(Correspondent's comment) In the six years following Krugman’s 2013 barrage of articles criticizing Ireland's economic policy its real GDP grew by 91% or 11.4% per year compounded—easily the highest in Europe and probably the world.

"If the question is when markets will recover, a first-pass answer is never."

(Correspondent’s comment) One year after Donald Trump's inauguration the S&P 500 index had gained 32.7% from Krugman’s election night doomsday prediction. When Donald Trump left office in January 2021 the S&P had gained 80.0%.

"And we really should have some patience... ...pronouncements that inflation can’t be transitory because it has persisted for a number of months are just silly."

"There wasn’t anything in the report suggesting that inflation is rapidly spiraling upward... ...That said, the headline number is highly likely to come down over the next few months."

"Look underneath the hood and it does not look like, we don't really have a 7% inflation economy out there."

(Correspondent’s comment) For what it's worth, Krugman has come out officially and admitted he was wrong on inflation.

“But can the debate really be as one-sided as I portray it? Well, look at the results: again and again, people on the opposite side prove to have used bad logic, bad data, the wrong historical analogies, or all of the above. I’m Krugtron the Invincible!”