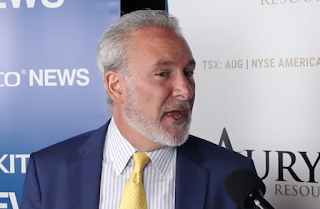 The Cautious Optimism Correspondent for Economic Affairs and Other Egghead Stuff is "resolutely ambivalent" about vocal financial commentator Peter Schiff.

Schiff is marvelously right on some points and has been proven dismally wrong on others, and when he’s wrong he tends to stubbornly double down with an intransigent intellectual inflexibility.

But the Economics Correspondent listened to a recent Schiff podcast where he made a golden point.

During the early stages of the Covid pandemic the Federal Reserve subtly changed its policy inflation target from 2% per year to an “average of 2%” per year.

The official rationale was that if inflation remains under 2%, as it had from 2013 to 2016, the Fed should run slightly higher than 2% inflation for several years going forward to pull the longer-term "average" rate up to 2%.

So Schiff has asked a logical question:

Q. Now that the country is experiencing far, far higher than 2% inflation and will probably continue to do so as the Fed works to lower it back to 2% over the next couple of years, will they deliberately aim for under 2% inflation in the years after that?

Using a hypothetical example: If the official inflation rate over four years is, say, 8%, then 6%, then 4%, and then 2%, then to achieve an average target of 2% over a decade the remaining six years’ inflation target must be zero.

Under those conditions does anyone expect the Fed will deliberately pursue a zero inflation policy for six years in order to achieve its own stated long-term target of 2%?

Thanks to Peter Schiff for his insight.