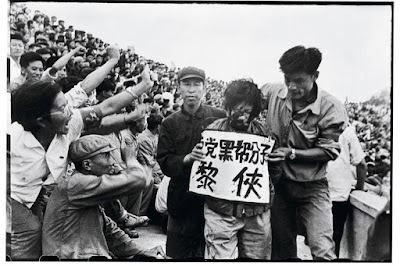 6 MIN READ - The Cautious Optimism Correspondent for Economic Affairs and Other Egghead Stuff is a fan of Dutch historian Frank Dikötter and his 2010 book “Mao’s Great Famine,” a chronology of Chinese Communist Party Chairman Mao Zedong’s attempt at full communist agricultural collectivization that instead produced world history’s greatest famine—killing an estimated 43 million Chinese from starvation, forced labor, beatings, and torture between 1958 and 1962.

Reading Dikötter’s followup, “The Cultural Revolution: A People’s History 1962-1976,” the Correspondent was struck by the close but unsurprising parallels between Mao and his party leadership clique’s manipulation of student Red Guards and the radicalization of America's woke, militant, violent, and brainwashed leftist youth.

Here are a few key sections from Dikötter that could easily describe the blueprint for the West's academic and political leftists, militant students, and Antifa:

1. “One group was more privileged than the others. When the radio broadcast the guidelines of the Cultural Revolution on 8 August [1966], it pointed out that no measures should be taken against students at primary schools, middle schools, colleges and universities.

“Mao went straight to the students, seeing in the young his most reliable allies. They were impressionable, easy to manipulate and eager to fight. Most of all, they craved a more active role. ‘We have to depend on them to start a rebellion, a revolution. Otherwise we may not be able to overthrow those demons and monsters,’ he confided to his doctor.”

2. “[Mao’s heir apparent Vice Chairman and Marshal] Lin Biao made a lengthy speech, appealing to the excited youngsters to destroy ‘all the old ideas, old culture, old customs and old habits of the exploiting classes.’

“A wave of violence engulfed the capital after the rally on Tiananmen Square. At the Beijing Third Grade Middle School, the principal was beaten to death… … At another middle school near Beijing Normal University the principal was ordered to stand under the hot sun while Red Guards poured boiling water over him. New depths of horror were plumbed at another middle school, this one attached to the Beijing Teachers’ College, as a biology teacher was knocked to the ground, beaten, and dragged by her legs through the front door and down the steps, her head bumping against the concrete. She died after being further tormented for several hours. Then the other teachers, rounded up as so many monsters and demons, were forced to take turns and beat her dead body. …some teachers were made to swallow nails and excrement, others had their heads shaved and were forced to slap each other.”

3. “The Red Guards also turned against some of their schoolmates. For years they had harboured deep resentment of students from bad [ie. capitalist or Nationalist Party] family backgrounds who often performed well, having to rely on their marks rather than their status to succeed. Only two years earlier the Chairman had voiced his opposition to an education system he viewed as dangerously meritocratic, demanding that admission of children from ‘exploiting families’ be limited.’

“The Red Guards now craved a system of permanent discrimination. They were born red, their enemies were born black. Students from bad class backgrounds were locked up, forced to carry out heavy labour on campus, humiliated and tortured to death.”

4. “Ordinary people considered to be from bad class background were openly persecuted. The family of one of the victims denounced as ‘hooligans’ a week earlier at the Workers’ Stadium were tracked down by Red Guards. They lived near the lake where Lao She’s body was found. The father, an impoverished elderly man named Nan Baoshan, was dragged on the street and clubbed to death. His second son was beaten and locked inside his home where he died of thirst a few days later.”

5. “On 18 August, appearing on the rostrum next to Chairman Mao, Lin Biao had exhorted his youthful audience to go forth and destroy ‘all the old ideas, old culture, old customs, and old habits of the exploiting classes.’ Feudal ideology had fettered people’s minds for thousands of years, and now those cultural remnants were to be destroyed to ensure that the country’s revolutionary colour would never fade…

“Sidney Rittenberg, an American who had thrown in his lot with the communist party before liberation and knew many of its leaders, was surprised by the fury of the message: ‘Everything was smash, smash, smash. I could hardly believe what I heard. These people at the very top were truly planning to destroy everything they had built up over the past two decades, to smash and build something new.’”

6. “On the evening of 20 August, bands of Red Guards began roving through the streets of Beijing, attacking anything that smacked of the old order. They changed street names, plastering new revolutionary terms over the old signs. Shops providing services, for instance tailors and barbers, came under attack, as their owners were humiliated, sometimes beaten and forced to close down…

“[Red Guards] decided to eradicate all traces of the old world in Zhengding, setting off towards the old quarter of the town with a red flag inscribed with ‘Red Guard’ fluttering at the head of their column. They copied what they had read and heard about the Red Guards in Beijing. They changed street names and attacked the lacquered signboards hanging over small shops…

“But the biggest target was an ancient history archway that symbolized feudal oppression. Thick ropes were attached around the top, the foundations were prised loose with crowbars and the structure was pulled down, reduced to a pile of broken stones…

“Similar scenes played out across the country. In Xiamen… …teams fanned out through the streets destroying everything old in their path, from ornamental brass knockers and antique shop signs to the dragon-shaped cornices on temples…

“Zhengding and Xiamen were small cities, but an even greater outpouring of destruction took place in Shanghai, a city that had been administered by foreign powers before liberation… …Every sign of the imperialist past came under attack, as Red Guards chipped, drilled, and burned off ornaments from the solid granite buildings along the Bund – renamed Revolutionary Boulevard. Shops selling curios or flowers were smashed. Mattresses, silk, velvet, cosmetics, and fashionable clothes, all condemned as bourgeois luxuries, were tossed out and carted away.”

7. “Now that the army had given them full licence to turn the old world upside down, the Red Guards went on a rampage. Libraries were easy targets, as they worked their way through the stacks, in schools and on campuses, confiscating every volume that looked even vaguely feudal or bourgeois. Book burnings were common. Some were symbolic, with only a few books thrown into the bonfire. Others were conflagrations that lit up the sky for days on end… …In Shanghai, Red Guards destroyed thousands of books from the Zikawei library, a scholarly repository of over 200,000 volumes started by Jesuits in 1847…

“Public monuments were assailed. In Shanghai, it took the Red Guards only a few days to demolish eighteen listed historical monuments, including the tomb of Xu Guangqi (1562-1633), the city’s first Christian convert, who had collaborated with the Italian Jesuit missionary Matteo Ricci. Longhua Pagoda, the oldest temple in Shanghai and a towering 44 meters in height, fell victim to the hammers and ropes of the Red Guards. Three thousand ancient scriptures belonging to the temple were reduced to ash. The Confucius Temple, an ancient architectural complex located in a quiet public park, was razed to the ground. Red guards also attacked St Ignatius Cathedral… … tearing down the spires and the ceiling before shattering the stained-glass windows…”

8. “There were scenes of Red Guards toppling the steeples of foreign churches or burning ancient pagodas in most cities… …Qufu, the hometown and resting place of Confucius, had some of the largest compounds and family tombs in the country… … Local Red Guards repeatedly tried to attack the premises, but the Qufu authorities managed to repel their assaults. Only after more than 200 Red Guards from Beijing had descended on the city were the tombs finally desecrated. Five female corpses, still well preserved, were tied together and hung from a tree…

“[Shanghai] had some sixty-nine cemeteries with 400,000 graves, and 20,000 of these belonged to foreigners. Headstones were systematically smashed, crosses broken and memorial plaques and inscriptions obliterated with cement or smeared over with paint… …The party intervened, deciding to level all tombstones dating from the pre-liberation era [pre-1949], since they were ‘symbols of imperialism…’

“Nationwide in 1966 there were roughly 50,000 graves belonging to foreigners. More than half of these were destroyed during the Cultural Revolution. Many others were defiled, and only one in ten managed to escape undamaged.”

(all passages from Frank Dikötter’s “The Cultural Revolution: A People’s History 1962-1976”)

ps. Dikötter has served as Chair Professor of Humanities at the University of Hong Kong since 2006. With the recent PRC crackdown on civil liberties in the former British colony it’s unclear if Dikötter, who has written many books critical of the CCP during the Mao era, has remained in the city or relocated. His Facebook page still reads “Lives in Hong Kong."