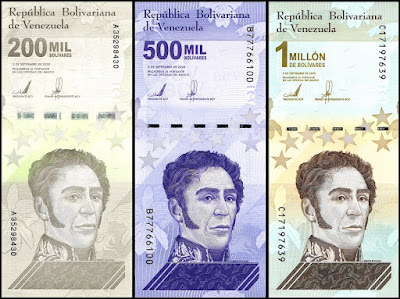 Back in May the Cautious Optimism Correspondent for Economic Affairs and Other Egghead Stuff posted an update reporting that Venezuela had launched a new 1 million bolivar (BsS) banknote worth less than 50 U.S. cents at the time.

However the 1 million bolivar note was really a 100 trillion bolivar note when accounting for two monetary reconversions in 2007 and 2018 when the socialist regime shaved three and five zeroes respectively off the original bolivar (Bs) and succeeding bolivar fuerte (BsF) to launch the reformed 2018 bolivar soberano (BsS) which has circulated within Venezuela until today.

But as of October 1st Venezuelans will see every one million of their old BsS bolivars converted into a single “bolivar digital” (BsD) worth about 25 U.S. cents.

Incredibly, this means that the successive Hugo Chavez and Nicolas Maduro regimes have shaved a total of fourteen zeroes off the original currency meaning 100 trillion 2007 Chavez-era bolivars can buy you just one new bolivar digital worth 25 cents, an inflation of one trillion percent over fourteen years setting aside the USD conversion rate of one Bs vs one BsD.

To put it in further perspective, Venezuela's official GDP in 2007 was 66 trillion Bs using the original bolivar. Using the more reliable black market exchange rate the entire Venezuelan economy in 2007 has been debased to about a quarter of a U.S. cent.

Or placed in more reliable U.S. terms if you held the entire United States GDP estimated at $22.7 trillion for 2021, by the time the Venezuelan central bank finished with you your fortune would be worth 23 cents or almost enough for two slices of Wonder Bread at Walmart.

As bad as inflation is getting in the USA, it’s no surprise that Venezuela is becoming highly dollarized with everyday citizens using U.S. dollars, Colombian pesos, euros, and Bitcoin to conduct daily private transactions. Even at the current annualized 5.25% U.S. inflation rate a million dollar nest egg would still be worth $489,000 at the end of 14 years as opposed to about 0.000001 cents (1/one millionth of one cent) in Caracas.