Minimum Wage Fallacies and Economics: “If wages had kept pace with productivity gains since 1968 the current minimum wage would be more than $24 an hour” (Part 1 of 2)

Cautious Optimism Economics Correspondent: “Under capitalism the lion’s share of unparalleled productivity gains, induced by centuries of relentless and continuous investment in better capital tools and machines, has been transferred to consumers in the form of lower real prices for vastly more goods and services of greater quality and sophistication. And in contrast to all of human history prior to capitalism, today's working masses are the primary buyers of the goods they produce.” 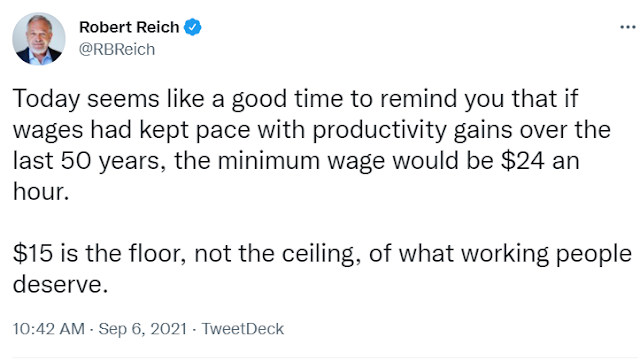 It seems after winning “Fight for $15” victories in many blue states, some liberal public figures are already complaining it’s not enough and demanding $24 an hour instead.

While on the surface this idea seems like a guaranteed way to close more small businesses and force even large ones to retreat into downsizing, “Inequality for All” author Robert Reich, far-left economist Dean Baker, and Senator Elizabeth Warren claim they’ve found the economic open sesame that will make it work.

To them, it will work today because it did fifty years ago. As Reich recently tweeted: “If wages had kept pace with productivity gains over the last 50 years, the minimum wage would be $24 an hour.”

This “minimum wage should keep up with productivity” argument has been very effective at convincing sympathetic left-wingers everywhere that workers are being ripped off for not receiving larger paychecks consummate with all the past’s productivity gains. And there’s been no shortage of online commenters parroting the soundbite to “prove” there will be no negative repercussions to evening the playing field with a massive pay hike.

But the productivity argument is rooted in elementary fallacies that anyone with a reasonable economics background can recognize. We’ll focus on the most glaring error in this column before covering two more in the next installment.

Even Paul Krugman saved the broken-clock theory in 1994 when he wrote:

“Productivity isn’t everything, but, in the long run, it is almost everything. A country’s ability to improve its standard of living over time depends almost entirely on its ability to raise its output per worker.”

Amen. In most countries, and particularly western nations, standards of living for workers have risen from primitive, pre-industrial conditions to modern comforts and plenty due to each worker producing vastly more output per labor-hour.

And the key to producing multiples more and higher quality goods and services than before lies not in toiling harder, but with the employment of more efficient and technologically sophisticated capital tools and machines. In fact, far from laboring harder, capital machines have moved workers of 150 years ago away from manual labor under the blazing sun from dawn to dusk into air-conditioned office buildings working behind a desk or on climate-controlled factory floors.

Today’s worker labors much more easily and for shorter hours than his 19th century predecessors, and enjoys a vastly higher standard of living, because capital tools and machines do so much more of the work for him.

The examples are countless, but just consider the first of two: one American farmer using a contemporary air conditioned, cabin-pressurized combine with modern fertilizers, irrigation methods, insecticides, and genetically modified seeds can produce as much food as 5,000 farmers using their bare hands and primitive tools in the underdeveloped world.

It’s that kind of productivity-enhancing capital machinery that allows the American farmer to afford a multibedroom house with two trucks, appliances, cable TV, and a first world standard of living while lack of capital keeps third world farmers destitute in mud huts.

Another, which CO discussed a few months ago, is Henry Ford’s factory assembly line. Introduced in 1913, the assembly line allowed Ford to reduce the number of man hours required to assemble a car from 12 to 1.5, an eightfold savings although he still had to pay for physical inputs.

MOTHER OF ALL PRODUCTIVITY FALLACIES

After that Warren, Reich & Company-brand logic goes off the rails.

The argument continues that with each increase in worker productivity the workers themselves are being screwed over if the productivity gains don’t go straight into their pockets as higher salaries.

To which anyone who understands capital economics would reply: “So what? It’s always been that way.”

Throughout the entire 300+ year history of capitalism the benefits of higher productivity through machines have never gone exclusively to the workers, nor to the bosses, nor to the investors. Throughout the centuries, as well as from 1968 to 2021, companies have nearly always passed on the lion’s share of productivity gains to consumers in the form of lower real prices.

And the main consumers of economic output in capitalist economies are the workers themselves.

No, no, and no. Ford did give his workers a raise to keep them from leaving what became more monotonous assembly line jobs, but it wasn’t a 700% raise. He did give himself a bonus. And the shareholders did gain from Ford’s bottom line improving.

John D. Rockefeller used his managerial genius to produce refined kerosene for a fraction of its previous cost. But he didn't hoard all the savings for himself, his investors, or even the workers. Instead, he raised the quality and lowered the price of kerosene by 88% over a period of 25 years, a bonanza to anyone who had previously spent their evenings in pitch black darkness.

To the extent Ford and Rockefeller’s workers consumed the same goods they helped produce, they did keep some of the productivity gains for themselves too just by saving money on a Model-T or refined petroleum. But Reich and Warren would still complain they were still being shortchanged since they saved on only two purchases.

Wrong again. The history of capitalism records virtually every industry has found ways to increase productivity over the centuries. Those companies that have refused have gone out of business, shunned by consumers and replaced by more innovative firms. It’s not just Ford and Standard Oil but all companies everywhere, then and now, increasing productivity and passing most of the savings on in the form of lower real prices.

And workers have benefited tremendously since they themselves are the primary consumers of those products—even if they don’t see it in the form of a nominal dollar raise.

It’s why a dozen eggs—which cost 61 cents in 1919 and would cost $9.29 today if adjusted for inflation—instead costs about $1.28 at Walmart (2019), a real savings of 86%. Everyone who eats eggs, including the chicken farm workers, has shared in the benefits of higher productivity.

It’s also why a one-way Boston-Los Angeles flight in 1940 cost passengers $4,788 in 2021 dollars, took 15 hours and twelve stops to complete while you shivered in the frigid passenger cabin, but today takes only six hours for $99 on Spirit Airlines.

Or since adjusting for inflation makes calculations more complicated, why don't we just measure the number of man hours of labor required by the average worker to purchase everyday items?

(thanks to economic historian Thomas E. Woods for some of these examples)

Incidentally there are three notable exceptions to this trend where real prices are skyrocketing instead of falling: housing, healthcare, and college education. And uncoincidentally these three sectors are the target of the most government interference, regulation, control, and subsidies. There is a direct causal effect of government interference driving the prices of these goods up faster than inflation, but the Correspondent doesn’t have room in this column to give that subject the time it deserves.

WHAT IF WE DO IT REICH’S WAY?

Finally, if Robert Reich and Elizabeth Warren wanted to dig themselves a deeper hole they could insist worker pay must keep up with productivity gains on a 1-to-1 basis, meaning all savings go into higher paychecks and nothing to consumers, managers, or investors.

Well that might make liberals feel good for a few minutes, but then we’d have to go back to $4,788 for a one-way cross-country flight, $12,000 for a television or, even as recently as 1980, $2,718 (in 2020 dollars) for a single CD-player. There would be no other choice, because paying every dollar in productivity-induced savings to workers would prevent real prices from falling.

And, to quote a favorite epithet of liberals that they also don’t understand, that’s what an economy with no "trickle-down" will really look like.

And one last thing: If investors and executives get no share of the productivity gains, well you can expect the progress of the last 300 years to grind to a halt since it’s investors who fund the next generation of capital tools and machines and executives who manage their deployment. Tell them they get no profits other than lower-priced eggs and watch investment capital and managerial acumen dry up much like it has in Venezuela, Cuba, and North Korea.