Minimum Wage Fallacies and Economics: “If wages had kept pace with productivity gains since 1968 the current minimum wage would be more than $24 an hour” (Part 2 of 2) 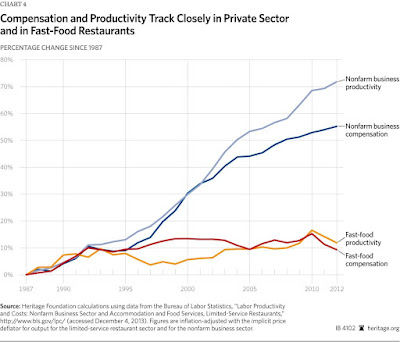 Robert Reich: “If wages had kept pace with productivity gains over the last 50 years the minimum wage would be $24 an hour.”

6 MIN READ - In Part 1 of this series we reviewed the gigantic fallacy propagated by Robert Reich, Elizabeth Warren, and some left-wing economists that nominal workers’ wages must always be raised in tandem with productivity increases.

In fact throughout the 300 year history of capitalism the lion’s share of productivity increases has been passed on to workers in the form of lower real prices for more goods and services of increasing technological sophistication (ie. dramatically higher living standards).

Which is why the average laborer of the mid-19th century lived in a one room wooden shack with a dirt floor while today’s average laborer, who works fewer hours in more comfortable settings, has a climate controlled house or apartment with modern appliances, a car, closets full of clothes, HDTV, smartphones, and can buy pretty much anything they want in a Walmart—even as most products inside a Walmart didn’t even exist in the mid-19th century.

For those who have not read it in detail yet, the Economics Correspondent recommends reviewing Part 1 at:

However the errors don’t end there. We’ll now cover two more equally uninformed mistakes on part of the “minimum wage has to keep up with productivity” crowd.

When Reich and Warren cite productivity increases going back to 1968, they’re referring to average productivity across all workers and all sectors, lumping fast food workers together with stockbrokers, airline pilots, and computer programmers.

According to the Bureau of Labor Services, certain jobs that intensively use software or telecommunications have seen triple-digit productivity gains going back to 1987—the first year available in the dataset. The proliferation of computers has made, say, accountants and financial workers much more productive since they can use spreadsheets, databases, and shared server storage to track vastly more information than before instead of using pen, paper, hand calculators, and endless file cabinets.

Which is also part of the reason not only computer prices, but also industries that rely heavily on computers such as stock brokerages and airlines, have delivered enormous real price reductions for consumers.

But how many more burgers does a McDonalds worker grill today than in 1987 due to new technology? Maybe drive through windows, wireless headsets, and those S/M/L one-touch drink machines have made fast food workers slightly more productive, but the gains haven’t been anywhere near the scale of other industries where both productivity and pay have risen and real prices have fallen faster.

In fact analyzing those Bureau of Labor Services tables from 1987 to 2019, we can see productivity gains in industries that employ lots of minimum wage workers (restaurants, grocery stores) severely lag those in other, higher skilled industries:

…and industries that employ many minimum wage workers?

The BLS didn't provide productivity increases for custodial or janitorial services but the Economics Correspondent wagers they haven't risen by leaps and bounds either.

Once again Reich and Warren are revealed peddling fantasies, this time by simple math. If minimum wage kept up with productivity gains for fast food workers (not with average productivity across all sectors) it wouldn't be anywhere close to $24 per-hour but rather something, well... not much higher than $7.25.

WHO TO THANK FOR CAPITAL?

The last fallacy we'll discuss is not rooted so much in statistical error as political economy.

Higher productivity, we’ve already established, derives nearly entirely from more efficient capital tools and machines. Worker skills and training are an input too, albeit a smaller one, but most companies also pay for workers to divert time away from immediate production to attend training on new capital equipment.

So back to capital tools, an airline pilot’s labor has become far more productive over 100 years not because he drags 340 passengers by hand from one continent to another twice as fast but rather because today he operates a $375 million commercial 777-300ER airliner instead of a Sopwith Camel.

The construction crane operator is more productive not because he carries half-ton steel beams on his back to the top of a 20-story building but because he has a multimillion dollar crane at his disposal.

Even Henry Ford’s autoworkers needed a factory assembly line before they could assemble a Model-T with 1.5 man-hours of labor instead of the original twelve.

Of course not. They show up to their first day on the job and ask the company: “Where’s that plane I’m supposed to fly?” or “Bring me that crane you want me to lift steel beams with” or “Point me to the factory floor you want me to work on.”

The Economics Correspondent is no different. He shows up at his daytime job and asks "Where's the multimillion dollar telecommunications system you want me to configure?"

It’s just expected—particularly by Elizabeth Warren and Robert Reich—that the company is supposed to drum up the money, investment, and risk to provide advanced capital tools for their workers.

So it’s no surprise that when a new multimillion dollar capital machine makes a worker 15% more productive than the old capital machine, not all of the gains will be transferred to the worker’s bank account.

Who is primarily responsible for the 15% growth in productivity? The savers/investors who sacrificed, deferred their immediate consumption, and risked their savings, and to a lesser extent financial intermediaries and the management who acquired, delegated, and placed the capital tools at the worker’s disposal.

The increased productivity bonus is just naturally more likely to go into their pockets than the worker’s.

Besides, savers and investors need to at minimum recoup their initial investment or they stop investing.

Sounds like a depressingly bad deal for workers doesn’t it?

Well the good news is in reality capitalism actually gives workers a far better deal than what we just described.

Over the longer-term workers win too in the form of a wider variety of products at lower and lower real prices.

For example, as the cost to manufacture a computer in 1980 fell from over $3,000 (2021 dollars) in 1980 to a couple of hundred dollars today, firms didn’t just leave the price fixed at $3,000+ for four decades and hoard $2,800 in profit for themselves while their costs relentlessly fell. Rather due to competition computer prices fell too. In fact profit margins actually shrank as computers became commoditized leading to narrowing profits for computer manufacturers while consumers raked up nearly all the gains.

Under capitalism the big winners have been the consumers who are typically also the workers.

Also under capitalism there's nothing stopping workers from claiming a greater share in the productivity gains by deferring their own consumption and buying corporate bonds or shares of stock—right alongside all the other investors who risk their savings to raise the workers' productivity every day.

In fact many workers already do so by participating in their 401k, pension, and individual retirement plans. Social Security? Not so much as virtually no Social Security taxes are directed into productivity enhancing capital investments.

And going beyond falling computer prices and considering every other product and service in the economy, the median income worker of today lives in most respects better than John D. Rockefeller—the richest American ever as a share of national GDP—did running Standard Oil in the 1870’s.

While Rockefeller, as company president and managerial genius, definitely got paid more than his workers, in the long run the relentless rise in capital productivity has allowed today’s worker to enjoy everyday conveniences that Rockefeller couldn’t dream of in his business days: air conditioning, air travel, television, automobiles (OK Rockefeller did get to drive in his old age but even today’s cars are far safer, faster, quieter, and more comfortable), ibuprofen, remote control, antibiotics, Internet and smartphones, ride lawn mowers, microwave ovens, carbon race bicycles with GPS (a Correspondent favorite)… the list is endless.

Even in recent history, a kid in Ghana with a smartphone has instant access to more information than President Bill Clinton could retrieve from the Oval Office just 25 years ago.

That’s the bonus that capitalism bestows upon everyone, particularly the masses of workers.

But Elizabeth Warren and Robert Reich still think if every dollar of every productivity increase isn't diverted exclusively to workers then a capital crime has been committed.

Therefore under Marxism investors and capitalists, who provide no labor in the increasingly capital-intensive process, deserve no credit for the rising productivity of the workforce, are simply parasites extracting an undeserved income, and deserve to be violently overthrown in a communist revolution.

This theory has been refuted over and over by economists of all schools (except the Marxists of course) and the Correspondent will write about it in more detail one day when he delivers a series on Marxism and communism.