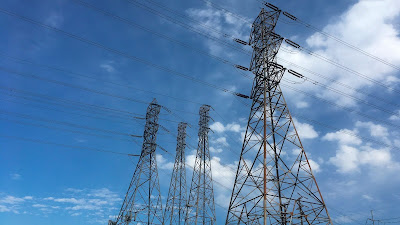 Britain’s third gas/electricity supplier has failed this week, the twelfth since September, leaving its assets in the hands of U.K. power regulator Ofgem (Office of Gas and Electricity Markets) to take over and determine the failed operator's final disposition.

However this string of bankruptcies isn’t due simply to rising energy prices. The USA and Canada have had multiple energy price spikes over the last two decades (2000, 2005, 2008, 2010-2014) and they’ve never precipitated waves of mass bankruptcies among utilities.

Twenty years later the U.K. is undergoing the same purge for similar reasons. To understand why it helps to revisit California’s 2000-2001 power crisis for a moment.

(Note: Although the U.K. is technically Great Britain plus Northern Ireland I will use the two names interchangeably in this article. British readers please accept my apologies for the technical error.)

Older CO readers may remember news headlines about rolling blackouts in California two decades ago plus subplots about the bankruptcy of power giant PG&E (yes, another one) and the near-bankruptcy of Southern California Edison which was only saved at the last minute by a rescue deal with the state government.

So why were there blackouts and utility bankruptcies throughout California while the rest of the USA, which also experienced higher prices, was relatively calm?

A major electrical power reform negotiated between Republican Governor Pete Wilson and the Democratic legislature was enacted in 1996 (the late 1990’s was a period of historically low energy prices). Among the major provisions of the regulations were:

1. Wholesale energy and power rates paid by California utilities were to be deregulated, allowing prices to move freely.

2. Retail prices charged by California utilities were to be capped by regulators, strictly limiting their ability to raise rates.

Already some readers might be able to see the problem this would inevitably create. So long as diesel, natural gas, or wholesale electricity prices remained low, retail price caps wouldn’t pose a problem. But the moment energy prices spiked, California utilities would have to pay spot prices on the open market but would be legally prohibited from passing those higher costs on to customers, generating huge financial losses.

Worsening matters is simple microeconomics. When demand for a commodity like power exceeds supply, a rising price encourages conservation and discourages waste by consumers. But given that state regulators wouldn’t allow rate hikes at precisely the moment they were most needed—when a critical supply-demand imbalance appeared—customers would have no incentive to alter their consumption behavior. Hence, rolling blackouts.

In what the Correspondent views as a sick and uninformed joke these reforms were called, and remain called to this day, “energy deregulation." And when the inevitable crisis struck, California liberals blamed and still blame the disaster even today on “free market capitalism.”

Which brings us back to the U.K.

Reuters has also reported that “Many British energy firms, often supplying both gas and electricity to homes and businesses, have struggled with soaring wholesale energy costs because of the regulator's price caps, which limits how much of the price rise they can pass on.”

Hopefully Ofgem will allow U.K. energy suppliers to raise rates higher (and soon) allowing them to save themselves from bankruptcy, but the Economics Correspondent suspects British socialists and left-wingers are already blaming “free market capitalism” and “deregulation” for their nation’s power woes. And just like California, they’ll probably keep blaming "capitalism and deregulation" twenty years from now too.

Keep reading if you’d like to learn more absurdities about California’s power “deregulation.”

Another bizarre “deregulation” that California imposed on its suppliers was a ban on wholesale price hedging, a tool that utilities—along with airlines, oil and gas producers, and a slew of other industries vulnerable to rapid changes in commodity pricing— routinely use to protect themselves from price volatility .

California utilities wanted to buy long-term contracts locking in wholesale energy prices to reduce the impact of potentially skyrocketing rates. But the Sacramento legislature, in its infinite wisdom, made hedging illegal.

The reasoning? If utilities locked in wholesale rates while they were low and then charged a higher, regulated retail rate, they might make more profit than the government considered acceptable. And we all know “too much profit” is a capital offense that must be prevented at all costs in California.

Well the legislature did prevent it, and at dear cost indeed.

When energy prices spiked in 2000 California suppliers were forced to pay high prices on the spot market which, again, they were forbidden from passing on to their customers. Once natural gas and diesel rates became prohibitively high California suppliers attempted to buy power from out-of-state but, legally restricted from locking in prices with hedging, found themselves forced to pay high spot market rates there too.

Some Californians love to dismiss the hedging prohibitions and blame energy traders like Enron for “market manipulation.” And it is true that when demand and prices started to rise Enron traders used clever strategies to charge even higher prices. One famous example is Enron overbooked a critical transmission line that connected the state’s northern and southern power grids, creating a bottleneck for power distribution which allowed it to charge even more to move power from one half of the state to the other.

What critics don’t mention is that a letter from an Enron whistleblower to Barbara Boxer’s office revealed that “There is a single connection between northern and southern California's power grids. I heard that Enron traders purposely overbooked that line, then caused others to need it. Next, by California's free-market rules, Enron was allowed to price-gouge at will.”

Well sure, when there’s only a single connection serving as transmission corridor between two population centers of 15 million and 23 million people it’s a lot easier for a canny firm to clog it up, create bottlenecks, and price gouge than when there are several connections.

And whose brilliant idea was it to allow only a single transmission line (when private suppliers had applied for years to construct additional ones)? California's regulator, the Public Utilities Commission.

Imagine airports in New York and Los Angeles, each with multiple runways and 100+ gates, but the Department of Transportation limits the number of slots (allowed landings) to just two per airport per day. One firm can more easily buy up huge "market share" and create scarcity/higher prices than if the government permitted the literally thousands of slots it does at those two airports today.

As further evidence, in 2000 other states had also enacted varying degrees of power deregulation, and Enron and other greedy energy traders were operating throughout. Yet only California suffered from statewide rolling blackouts and the failure or near failure of giant utilities that served over 30 million people.

Ironically Davis, who had previously championed restricting private suppliers from hedging on wholesale prices, granted himself the freedom to do exactly that. Evidently it’s OK for the government to use everyday market tools to limit its losses but not the private sector.

And in a follow-up act of astonishing stupidity Davis immediately signed long-term contracts with out-of-state providers, locking in natural gas and electric power at astronomically high prices. Now California government was committed to paying a crisis premium for years.

When the crisis abated shortly after and wholesale prices fell, Davis tried to renege on his hedging contracts and demanded suppliers accept lower payments from the state. Wholesalers obviously refused, holding him to the terms of the hedging contracts he had voluntarily entered into.

California’s Treasurer warned Davis that overpaying billions of dollars for electricity was blowing a hole in the state budget, and the state filed suit against suppliers for lower rates, but the Economics Correspondent doesn’t recall the final court ruling.

However Alaska Republican Senator Lisa Murkowksi confirmed this story in her statement during Congressional hearings on the crisis:

“The State of California signed billions of dollars of long-term power supply contracts on behalf of the investor-owned utilities. Keep in mind that the State prevented the IOU's from long-term contracts in the first place.”

“When the State signed contracts, when they proved to be far above the market, putting California taxpayers on the hook for billions of dollars, guess what happened? Well, we see that in the paper as Governor Davis proclaims his predicament. California, according to Governor Davis, is trying to abrogate the contracts and place the blame on industry, not just Enron.”

In the end, the electric power debacle, combined with his attempt to fill the state budget shortfall by imposing $1,000+ annual car registration renewal fees, brought about the fall of Gray Davis. A successful recall effort was launched resulting in the election of Arnold Schwarzenegger as new state governor.