7 MIN READ - The Cautious Optimism Correspondent for Economic Affairs and Other Egghead Stuff examines media attempts to portray America as backwards on minimum wage while omitting its negative effects overseas. 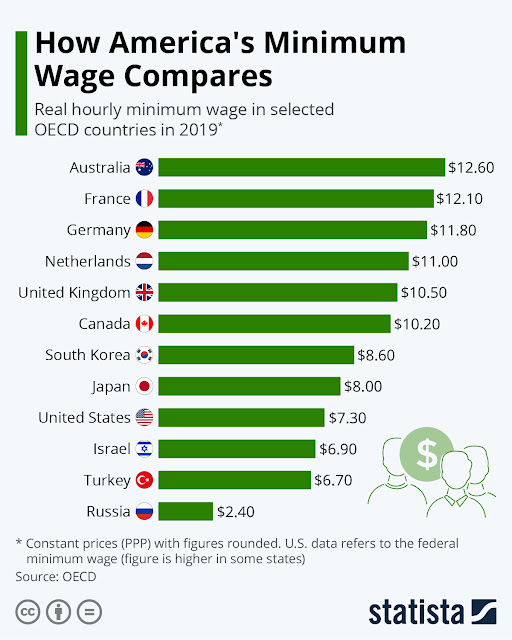 Anyone who followed minimum wage press stories covering Seattle’s 2014 $15-per-hour debate may have noticed a flood of media headlines at the time lamenting how “behind” the United States was for paying a national minimum wage below that of most OECD countries. There was no shortage of columns sporting charts comparing the USA’s federal $7.25/hour wage floor against higher pay in other, largely European countries.

A typical visual was similar to the one attached to this article (the Correspondent picked a 2019 chart for comparison purposes) that lists “select” OECD countries and portrays the United States as lagging far behind advanced economies, only paying more than backwards member nations like Turkey and Russia.

There's a lot to pick apart within these oversimplified and clearly manipulated charts so without further ado let's jump in.

First, there are 38 member nations in the OECD but our chart only lists twelve with the United States paying less than 67% of them.

Well as it turns out the website oecd.stat has real PPP minimum wages listed for all 38 OECD countries, not just twelve hand-selected ones (link at bottom of article), and when sorting them highest-to-lowest the USA ranks 15th highest paying of 38 or higher than 61% of the organization.

Lower than 67% in presentation and higher than 61% in reality:  quite a distortion.

Moreover, given that eight OECD member states had no minimum wage at all in 2019—countries like Switzerland, Norway, and Austria, something else that is left out of the chart—the U.S. federal minimum wage of $7.25 is actually 18% higher than the average across the entire OECD.

That's another minor detail that always gets left out.

Furthermore, the “Israel, Turkey, Russia” attempt to position the USA alongside poorer nations (excluding Israel) completely omits other wealthy economies that have no minimum wage, such as the aforementioned Switzerland but also Singapore, or which had no minimum wage until very recently such as Hong Kong ($4.75 per hour as of 2019, far less than Turkey).

Granted, neither Singapore nor Hong Kong are OECD members because of their small size and Hong Kong’s ambiguous status as a Special Autonomous Region of China, but both are wealthy, advanced economies with Singapore’s per-capita GDP on par with the USA and Hong Kong’s higher than the UK, France, or Japan (source: IMF).

And there's more. Such oversimplified charts omit any mention that higher minimum wage produces negative consequences. The reader is led to believe low-skilled workers enjoy the luxury of higher pay with absolutely no repercussions.

But as we’ve already discussed in previous CO articles, a minimum wage set above worker Marginal Revenue Product (MRP) invariably leads to unemployment or an hourly wage of zero.

To go back and read more about Marginal Revenue Product visit:

Although high minimum wage has little effect on that share of the workforce that already delivers high Marginal Revenue Product, the idling of the low-skilled segment of the labor force still produces marginally higher overall unemployment and significantly higher “youth unemployment."

So have our featured OECD countries seen negative consequences in practice?

We won’t look at 2020 or 2021 since world economies have been so dramatically impacted by Covid.

1) For the eight countries listed in the chart paying higher minimum wage than the USA, we exclude Japan which has always been an outlier that calculates unemployment in a very strange and generous way: using surveys of graduating students or jobless workers that ask “Do you anticipate working in the next month?” If they reply “yes” they are counted as employed.

Unsurprisingly Japan’s unemployment rate has long been accused of being artificially lowered by this method and besides, its minimum wage is the closest to the United States anyway making comparisons less discernable.

South Korea also has unorthodox ways of counting students, family workers, or housekeeping spouses as “not in the labor force,” but we’ll use their numbers anyway.

So before the Covid pandemic unemployment rates in 2019 for the seven countries that remain were:

And the USA? 3.6%, a little over one point lower. The USA’s unemployment rate was also lower than five of the OECD countries and higher than two.

(source for all jobless rates: St Louis Federal Reserve Economic Data or “FRED” except Singapore and Hong Kong which are not available on FRED and were obtained at tradingeconomics.com)

2) What about youth unemployment, a better gauge of the negative impact of minimum wage?

For the seven cherry-picked OECD countries 2019 youth unemployment rates were:

That's quite telling about the higher minimum wage’s impact on young, unskilled workers trying to get a start in the labor force even in good times.

3) But 2019 is a period when all world economies were doing fairly well, at least right before the Covid pandemic. Overall demand for workers was strong. What about when economies are weak and struggling to pull out of recession?

The results are similar in, say, 2015 when the world was on the cusp of digging itself out of the Great Recession.

And the USA? 5.0%, once again 1.1 points lower and once again lower than five countries and higher than two.

By the way some people may ask “Well what about the Eurozone crisis? Wasn’t it a handicap on European countries?”

Yes, but the Euro crisis countries were primarily the PIIGS (Portugal Italy, Ireland, Greece, and Spain) which aren’t on the list. Of the Eurozone countries on the list northern members Germany and the Netherlands did quite well, France poorly although it was never in crisis, and the U.K. uses the pound sterling and therefore isn’t a Eurozone member.

A MORE “EVEN” RECESSION

What’s interesting about 2015 is that the USA was the hardest hit of all these countries by the financial crisis since the largest housing bubble and most of the lousy mortgage securities originated here. Canada avoided a crisis entirely and Australia avoided a recession due to strong raw materials exports to China. Yet the USA still ran a 1.1 point-lower unemployment rate and lower than five of the seven countries.

So what if we go back to the previous recession that was more evenly distributed across the nations, the fallouts from worldwide stock market bubbles bursting and the 9/11 terrorist attacks?

This time the USA’s unemployment rate was lower than six of seven countries and this time 1.6 points lower than average.

And if anyone is asking “Well so what, it’s just 1.6 points?” just consider the news and political headlines in the USA when the unemployment rate is 4.9% versus when it’s 6.5%.

In the first case the headlines read “full employment” and “a strong job market.”

In the latter case it’s “stubborn joblessness,” “people are struggling,” and “slow, painful recovery,” and for good reason.

Also consider how the Federal Reserve is currently juicing the housing market, distorting interest rates, and producing "transitory" 5% inflation just to get the remaining 0.2% of America's labor force reemployed to achieve a 5% unemployment rate.

And just how do those zero minimum wage countries we mentioned earlier compare? The ones that are completely excluded from these charts as if they don’t exist?

I mentioned Singapore, Hong Kong, and Switzerland as examples even though several European countries like Norway, Finland, Denmark, and Austria also have no minimum wage (don’t tell that to Bernie Sanders and AOC).

Well before we look at the numbers, it’s worth noting that some of these countries did recently adopt their first minimum wages in only the last few years—usually with conditions.

Hong Kong now has a very low blanket minimum wage of about $4.75USD per hour, but it had none back in 2015.

Singapore has recently passed a very small minimum wage for domestic cleaners and security guards only.

While Switzerland has no national minimum wage the canton (ie. province) of Geneva passed the world’s highest minimum wage in late 2020.

But when looking back to 2015 or earlier these countries were all minimum wage-free.

What were their unemployment rates then?

That's compared to the more progressive OECD countries' average of 6.1% In other words the result is far, far lower than full employment versus recession level joblessness.

It gets even worse during the depths of the financial crisis.

Singapore, Hong Kong, and Switzerland, all of which are financial centers and were disproportionately hard hit by the financial crisis, “peaked” in the Great Recession at unemployment rates of 3.3%, 5.3%, and 4.4%.

Regarding Singapore, Hong Kong, and Switzerland (incidentally ranked the 1st, 2nd, and 4th freest economies in the world by the Heritage Index), can you imagine financial centers in the darkest hours of the greatest financial crisis since the Great Depression enjoying full employment? It’s unheard of, which is probably why our media aren’t too keen on reporting about it and like to leave zero minimum wage countries out of their “analysis.”

Of course none of this makes the headlines, charts, or stories lauding higher-minimum wage countries. But during economic downturns the end results is millions more workers across the OECD languish in joblessness which the press blames on “austerity” or “lack of government deficit stimulus spending.”