4 MIN READ - The Cautious Optimism Correspondent for Economic Affairs and Other Egghead Stuff explains how even some small businesses have joined white workers, xenophobes, labor unions, progressive academics, and big business in weaponizing minimum wage against their competitors. 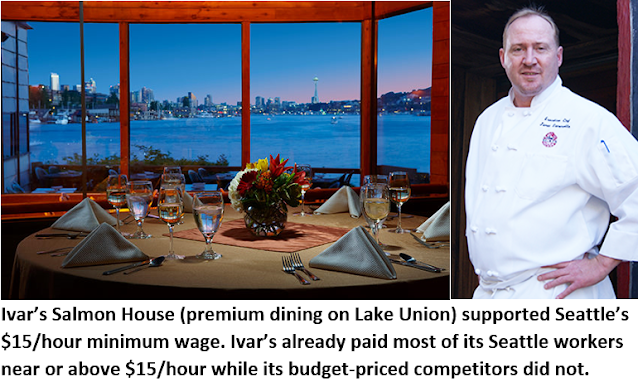 Our last agitator for higher minimum wage is another crony-capitalist fan, but it’s not megacorporations. Rather it’s smaller businesses that offer a premium product or service at a higher price who would love to cost-cripple their lower-end competitors out of the market.

Typically a smaller business that sells a premium product in its sector and employs higher paid workers to do so can force its budget and mid-tiered competitors’ costs up by lobbying government to raise the wage floor to some level near or slightly below its own premium salaries. Hence the premium business’ costs are mostly unchanged while its lower-tier competitors are forced to raise their costs and prices significantly.

At that time a Seattle city commission comprised mostly of politicians and bureaucrats recommended a hike to $15/hour, the first of its kind in the country at the time.

At first Donegan came out against the wage hike. At the time Ivar’s operated a mix of higher end seafood restaurants in the city of Seattle and more casual counter-service “fish bars” across the Seattle metro area.

But after lengthy discussions and negotiations with the committee Donegan finally came out publicly in favor and then went on a marketing campaign to demonstrate how much Ivar’s cares about employees.

In fact the new $15/hour minimum wage turned out very well for his high-end restaurant operations on Union Lake and at the tourist waterfront.

Why? Selling a high-end dining experience and menu, Ivar’s already paid many of its higher-skilled employees close to or above the new minimum wage. But competing restaurants that offered a casual family self-serve experience paid their employees closer to the old minimum wage, well below $15.

Ivar’s moved nearly all its casual chain restaurants, which paid employees less than the premium flagship store did, to Seattle suburbs like Kirkland, Redmond, Bellevue, Bothell, and others where the new minimum wage didn’t apply, but left its higher-end restaurants operating in Seattle.

(Seattle suburbs may have followed suit and raised their own minimum wages to $15/hour since then, but in 2014 Donegan didn’t know if/when that might happen)

Even today 16 of Ivar’s 19 locations are outside Seattle, all casual, with the remaining three in Seattle being premium-dining flagship locations or in high-dollar tourist areas.

And what about Ivar’s competitors? The higher minimum wage was devastating for them. Local casual seafood restaurants were forced to incur huge wage increases—both in nominal and relative terms—over Ivar’s whose workers were already wearing ties and whose kitchen was already manned by highly trained chefs.

Hence Ivar’s only had to raise its prices by a little while Seattle’s casual seafood restaurants had to raise their prices a lot.

The Seattle press reported record numbers of restaurant closures in the years after the minimum wage hike—although some simply moved out of Seattle into surrounding suburbs to get away from the $15 mandate. But even survival by relocation left less competition for Ivar’s Seattle-based premium seafood restaurants.

Post-$15 minimum wage Ivar’s President Bob Donegan went on another media blitz, telling willing reporters that customers loved the higher prices. Donegan described a new pricing strategy where his flagship menu prices rose roughly 21% across the board, but customers were told that in exchange tipping would be optional (ie. zero if they chose).

Incidentally Ivar’s also publicly disclosed that 17 points of the 21% price hike would compensate for no tipping while the other 4 points would fund the minimum wage hike… which reveals just how lightly their already high wage structure was impacted by the new law.

While the Correspondent thinks this was mostly a marketing ploy (Ivar’s dropped the policy in 2017) it was a scheme that once again Ivar’s low-priced competitors couldn’t duplicate. Since casual sit-down restaurants have no waiters, they couldn't advertise "no more waiter tips" to compensate for higher menu prices since they didn't have waiters to begin with.

So Ivars' lower-priced competitors were forced to raise prices sharply with no gimmicks allowed.

Donegan was later rewarded with an appointment to the Federal Reserve Bank of San Francisco’s Economic Advisory Council.

For those lower-tier restaurants that managed to survive, their price advantage over Ivar’s narrowed dramatically—as designed. Since their costs rose sharply while Ivars’ did not, the price gap between casual and premium dining shrank. Hence more consumers decided casual dining “wasn’t worth it anymore” and perceived paying only slightly more for Ivars’ premium experience as a better value for the money.

Just as McDonald’s and Amazon are planning, Ivar’s made up their marginally higher costs on increased volume at the expense of their competitors who were forced by law into absorbing big cost increases.

Granted, small businesses don’t have as much political clout in Washington, DC as big business and, being less sophisticated at weaponizing regulations, don’t lobby for higher minimum wage as consistently. But bad players do exist, as evidenced by the Seattle experience, and the clever business that figures out how to kneecap competitors with minimum wage can and will approach local and state governments for quid-pro-quo arrangements: “I make altruistic announcements supporting a living wage for the greater good and that gives you (the politician) cover to get it passed, handicapping my competitors.”

Postscript: Ivar’s strategy worked until they themselves were hit hard along with everyone else by the Covid crisis in 2020. Now they are struggling not to join the long list of restaurants they helped drive out of Seattle or put out of business.

(see AEI charts: Seattle loses nearly as many jobs in 2015 as during the Great Recession, and number of overall restaurant jobs in the Seattle metro area declines in 2015 despite MSA including surrounding suburbs thus understating the extent of job losses within Seattle itself). 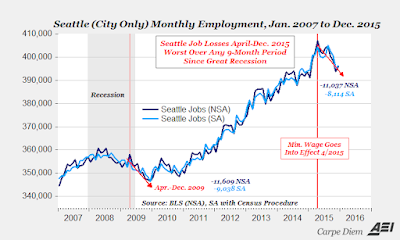 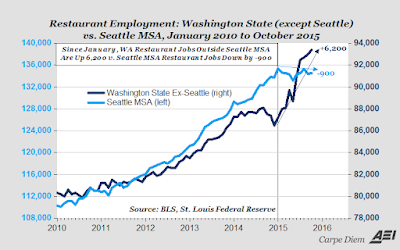