“California is in many ways… …a progressive success story.” 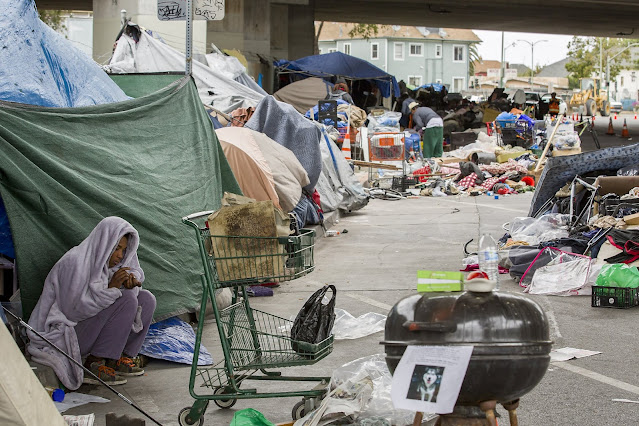 Yes, you heard that right. Joe Biden isn’t the only one losing it. Paul Krugman has joined him, writing his recent column hailing California as “a progressive success story” that conservatives threaten to tear down if talk show host Larry Elder is elected in the upcoming governor’s recall election.

His column’s title? “California Could Throw Away What It’s Won”

Aside from hyperbolic projections of a political U-turn in a state where the Democratic legislative supermajority will kill every Elder policy priority, Krugman praises what he calls California’s successes with GDP and employment growth, raising the minimum wage, raising taxes, attracting rich residents, and several more.

We don’t have space here to dissect each of his named “successes” one by one, but his column is included for those who wish to read it.

Krugman claims California’s economy is doing great, as well in fact as its evil red adversary Texas. His proof? The Golden State has allegedly achieved equal GDP growth and brought unemployment down as fast as the Lone Star State.

But similar performance since when? Krugman carefully selected a date range from 2010 to just before the start of the Covid pandemic.

Right away it’s clear this is a manipulation of dates to achieve the best possible outcome. 2010 was during the depths of the post-financial crisis Great Recession—which clobbered California’s economy far worse than more resilient Texas. That handicaps California, giving it an easy starting line which, ironically enough, is the result of their bad policies.

Also ignoring the Covid pandemic crisis handicaps California performance since it was crushed much harder by the ensuing shutdowns and recession.

According to the St. Louis Federal Reserve, from 2010 to 2019 California’s real GDP rose 36.2%. And just as Krugman argued, Texas’ GDP growth of 35.5% during the same period is similar and even lags by 0.7 overall points.

(all GDP, unemployment Federal Reserve links at end of article).

But it’s easier to grow faster after your economy has collapsed heavily in a recession. In fact from the peak of 2008 to Krugman’s 2010 baseline California GDP fell by 2.6% while Texas actually grew by 2.2%.

You can bet he didn’t mention that.

In fact, if we test all sorts of other comparative time frames Texas outperforms California by far more than 0.7 points.

Krugman says California did just as well on employment than Texas from 2010 to 2019.

Well sure, California’s unemployment rate cratered to 12.6% during the Great Recession vs 8.3% for Texas—another statement on the relative resilience of Texas’ economy to California’s vulnerable one.

By the 2019 peak California mostly caught up to 4.2% unemployment. This was still worse than Texas’ 3.5% jobless rate—although both qualify as full employment—but Krugman is focused on California’s “most improved” status as if most improved team wins as many Super Bowls as best team.

What really matters is that a lot more people were jobless for a lot longer time in California, both in nominal terms and as a percentage of the workforce. But Krugman, who all throughout the Great Recession urged policymakers to focus on the real human suffering inflicting on people by joblessness, chooses not to focus on that now.

And Krugman’s jobless comparison—which has already crashed and burned by this point—looks even worse when factoring in other important numbers he omitted: size of workforce and labor participation.

Texas, despite having only three-quarters the population of California, gained nearly twice as many workers on a nominal basis (2.06 million vs 1.15 million) and posted nearly three times the growth (17.4% vs 6.3%)

And yet despite all this Krugman simply sells a thesis to his readers that California did just as well as Texas on the economy.

HOUSING AND THE HOMELESS

Krugman does mention that California has more homelessness and he rightly points the finger at a huge culprit: NIMBY policies that prevent new residential construction and drive prices up. Or as economists say: “the supply of housing is inelastic so a small increase in demand produces a more rapid increase in market equilibrium price.”

However Krugman doesn’t mention that it’s not just the quantity of homelessness, but the “quality” too—if, by quality, one means entire districts not only sprawling with tents, but also lined with used syringes and human feces.

Texas and Florida cities have homelessness and tent dwellers too, but nothing on the scale of filth and disease that sprawls from mini-cities in the centers of San Francisco, Los Angeles, San Jose, San Diego, and even smaller cities like Santa Cruz and Santa Ana. The reason is because Texas doesn’t shower the homeless with millions of free syringes and generous government or government-funded services.

And even while correctly citing NIMBYism as a real problem Krugman still tries to blame (get this) conservatives.

Krugman: “NIMBYism, however, happens to be one of the few major issues that cut right across party lines. Conservatives are as likely as liberals to oppose housing construction.”

That’s an interesting claim. If conservatives are just as likely to oppose housing construction then why are red states, which are controlled by conservatives, building homes like mad and promoting urban sprawl?" If Krugman’s “logic” is correct, Texas, Oklahoma, Tennessee, Utah, South Carolina, and the whole lot of red states should be have stopped nearly all new housing construction for the last two decades.

To those CO readers living in red states: “Are you seeing a near complete statewide ban on housing construction?”

THE RICH AND INEQUALITY

Krugman lauds that lots of wealthy people are moving to California who will pay lots of taxes. The Economic Correspondent, who lives in San Francisco, doesn’t find that surprising.

Despite California’s problems it still has a great deal of natural beauty, even in the nicer big city neighborhoods (I live in one) where liberals make sure the police keep homeless out thus forcing only the middle class and poor to live with the consequences of their politics.

Along with temperate weather in coastal areas those who can afford California, the rich, tend to put up with the negatives to live here. But if California’s climate and landscape changed tomorrow to that of, say, Nebraska (nothing personal Nebraska!) the rich would move out, some to Nebraska for lower taxes and lower crime.

But that’s part of the problem. The middle class has been shut out with fewer jobs and exorbitantly expensive housing, and with an inadequate/finite number of residential units only the wealthiest can afford to buy homes in decent urban areas. And that includes rich people moving in from out of state.

One interesting statistic puts this in perspective: the Housing Affordability Index (HAI) which is how close the median household’s income comes to qualifying for a mortgage for a median priced home.

The Affordability Indexes for California’s largest cities are:

So in the case of San Francisco, the median household income of $122,000 is only 64.1% what’s needed to qualify for a mortgage on a median priced home. And median priced homes in California tend to be pretty compact/modest.

In San Jose the median family income needs a near 100% pay raise to qualify for such a mortgage.

So a huge majority of Californians are shut out of urban home ownership. That’s what happens when the government claims housing is a human right just before making it illegal to build any.

What about Texas’ Affordability Indexes?

In Austin, Texas’ most expensive housing market, the median household income can already afford to qualify for a mortgage on a median-priced home and would even if their pay was cut by over a third. Houston, Dallas-Fort Worth, and San Antonio are even more affordable meaning home ownership is much more obtainable for Texans.

The end result in California is a minority composed of wealthy people get to own a home in desirable locations of large cities and everyone else gets shut out. And as home prices skyrocket the rich truly do get richer while the middle class and poor, who can’t own a home, become lifetime renters or move out.

Well move out is what the middle class is doing while wealthy and poor illegal immigrants move in.

And what’s another name for this phenomenon?

California has the worst inequality in the nation, yet Krugman still calls California a “progressive success.” Given how liberals have been rabidly obsessed with “inequality” for over a decade he sure picked a strange state—with the highest inequality in America—to hold up as a model.

Lastly here’s a short list of some other issues facing California that Krugman left out. Keep “progressive success” in mind when reviewing these:

-Regular power blackouts despite importing 27.8% of California's power from out-of-state including coal-firing plants in Delta, Utah and San Juan County, New Mexico, and endless TV and radio ads pressuring Californians to cut back power usage from 4PM-9PM each night. On the plus side SB.350 mandates that 50% of all California power must come from renewable resources by 2030 which should solve ongoing power problems.

-Highest gas prices in America after only Hawaii which lies 2,500 miles offshore

-Dysfunctional schools that refuse to open or only open for one day to secure federal funding, and when they are open brainwash students into socialist robots (Krugman probably considers this a positive)

-Filthy and exorbitantly expensive public transportation. Other blue cities have this problem but not on California’s scale where urine, feces, and syringes are a common sight.

-And yes, taxes. It’s harder for the middle class to afford living in California with a marginal state income tax rate of 9.3% on all income over $57,800 versus a tax of zero in Texas.

Schools open for one day only