7 MIN READ - More on the weaponization of minimum wage from the Cautious Optimism Correspondent for Economic Affairs and Other Egghead Stuff. 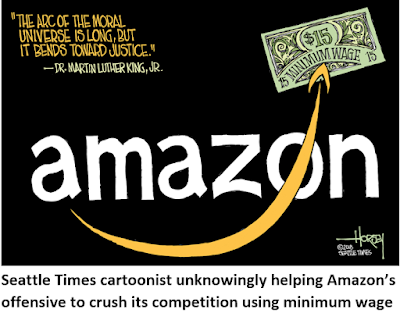 “Amazon supports the Raise the Wage Act, which will increase hourly wages for 32 million hard-working people… …We applaud the policymakers leading this critical effort… …We believe $15 an hour is the minimum *anyone* in the U.S. should be paid for an hour of labor. We also believe it’s good for business.”

“Jeff Bezos’s flagship enterprise publicly supports the implementation of a $15 an hour federal minimum wage. Such a policy would cripple small businesses, especially those in rural areas, and, in effect, open up more of the market for Amazon. Such advocacy is borne out of brazen self-interest , not genuine concern for workers.”

In Part 1 we discussed the over century-long strategy employed by labor unions and skilled white workers of using minimum wage to price their lower skilled but also lower-priced nonunion and minority competition out of work.

To read more about the historically racist and xenophobic roots of minimum wage laws, go to:

In today’s economy the most active weaponizer of minimum wage against competitors is business, specifically:

In this column we’ll focus on big business and save smaller businesses for the next installment.

So why does anyone think McDonald’s has officially come out in support of a $15 minimum wage?

McDonald’s executives are now declaring they support a higher minimum wage for the welfare of American workers, “their communities and their people.” (McDonald's U.S. President Joe Erlinger). And in its letter to the National Restaurant Association McDonald's has stated “We believe increases should be phased in and that ***all industries should be treated the same way***"  (key emphasis mine)

But as the late economist Murray Rothbard always reminded his students to ask: “Cui bono” (who gains) from the new law?

Clearly a nationwide increase in the minimum wage from $7.25/hour to $15/hour will raise McDonalds' costs, but it will cost their small competitors a lot more. Because McDonald’s has the means to replace more expensive labor with capital and leverage economies of scale that mom-and-pop burger competitors can’t.

Consider the kiosks we’re already seeing pop up in virtually every deep-blue city’s McDonald's and even some middle-America locations. When cashiers cost $15/ hour it becomes less expensive to replace them with self-order stations.

McDonald’s, which has nearly 16,000 locations in North America, already connects its stores via computer networks, has a large IT staff to support their current information assets, and has many of the assets in place today to deploy and operate a large kiosk network to replace tens of thousands of human cashiers.

Furthermore with so many stores they can operate the kiosk network at a lower per-location cost using simple economies of scale while getting a per-unit supplier discount for being such a huge buyer.

They employ a handful of cashiers at their locations, and those workers probably multitask pulling orders from the kitchen to the counter and dining room cleaning duties.

Mom-and-pop currently has no computer network and no IT workers, at most maybe a modest website, email, and interstore communication by phone. How much will it cost them to roll out a new corporate network, self-serve kiosks in each store that send orders electronically to the kitchen and display queueing orders both to cooks and waiting customers? And how much will it cost them to employ an IT professional to install, operate, and maintain the stations and software, integrate their payment systems, and replace/upgrade the solution?

On a per-store basis not only will mom-and-pop’s costs be far higher for their three locations than McDonalds’ 16,000, it may even be higher than simply forking out the extra money and giving their cashiers the raise to $15/hour.

Hence, lacking the same options that a megacorporation like McDonalds has, mom-and-pop will have to raise their prices far more than McDonald’s who is more able to fire their cashiers and replace them with less expensive machines (ie. substitute labor for capital).

Final result? With mom-and-pop’s prices rising fastest, more customers abandon them and defect to McDonalds’ less burdened price structure. McDonald’s makes up their marginally higher costs on increased volume—at their smaller competitors’ expense. Ideally, many mom-and-pops are even driven out of business altogether, plenty of which has happened in $15/hour blue cities as the Economics Correspondent has already witnessed here in San Francisco.

If minimum wage rises even further and by enough to make workers like cooks too expensive, we’ve all seen new machines being developed for food preparation that, once again, McDonald’s will be more able to afford enterprise-wide while it remains an impossibly expensive dream for mom-and-pop operations.

Large companies have been aware of their greater ability to absorb systemwide costs than small-scale competitors for decades, and the mantra goes far beyond just minimum wage legislation. Which is why most new expensive regulations have been lobbied for and even written by big business over the last several decades.

A good example is Dodd-Frank which placed huge regulatory burdens on financial institutions.

Money center banks like JP Morgan and Citibank may not have been thrilled about new post-financial crisis regulations, but they were able to lobby hard to change many of its provisions. In Dodd-Frank’s final form Wall Street banks were better able to absorb new costs as they already had small armies of regulatory compliance personnel, but countless small community banks in America’s heartland soon complained they were paying more people to perform regulatory compliance than conduct lending, processing, and collections.

Also during the days of airline regulation the U.S. Civil Aeronautics Board (1938-1985) set high fares and shut out new airline market entrants. According to Wikipedia:

“While the CAB regulation suppressed free competition, it provided security for the existing airlines… …To achieve its goals, the CAB was empowered to provide and administer subsidies to airlines. Further, the CAB regulated airline industry mergers and intercompany contracting -- but shielded the airlines from antitrust regulation.”

It’s no surprise that the dominant, legacy airlines of the time threw their support behind creation of the CAB. Airlines were guaranteed to make a lot of money without worry from competitors lowering fares, they paid their employees well, and air travel was glamorous but unobtainable for the middle class as only the rich could afford to fly.

Probably the other most visible proponent for $15 minimum wage has been Amazon.

Yes, raising the wage floor to $15 will cost Amazon more money, but it will cost their biggest competitor—Walmart—a lot more, which Amazon is counting on.

Walmart has thousands of stores to operate with armies of minimum wage store cashiers and stockers. Amazon has some minimum wage workers in its warehouses, but its workforce is far more geared towards higher-paid information technology and logistics positions and it also has a generally smaller workforce and larger net income profit margin.

Using an extreme reductio ad absurdum example, if both companies had to give all their employees a $7.75/hour pay raise for fulltime work it would cost Amazon $20.9 billion per year. But it would cost Walmart far more: $37.1 billion.

All other things remaining equal, Amazon would barely still be profitable, but Walmart would run huge losses around $20 billion a year.

Of course neither company’s payrolls are 100% fulltime. Both companies have large numbers of skilled employees who already make more than minimum wage.

But Walmart has far more minimum wage workers than Amazon due to Amazon’s web-based delivery model and its logistics and web services divisions. And Amazon has a fatter profit margin more able to absorb the cost.

Amazon management knows this and has already calculated that it could easily absorb a hike in the minimum wage without having to raise prices, but Walmart can’t.

Thus Walmart would be forced to raise their prices significantly to compensate for its higher labor costs while Amazon would have the option not to. Higher prices at Walmart means more customer defections to Amazon who plans to make up their own marginally higher costs on volume—at Walmart’s expense of course as well as the American consumer.

Of course Walmart can also deploy machines to partially offset higher costs (which means laying off workers) as it still has enormous capital budgets, but Amazon also gains business from the even larger loss of customers at America’s countless small retail business operators. Unlike Walmart they have no effective defense.

In Amazon’s case they’ve actually stepped forward and raised their own minimum salary to $15/hour unilaterally without waiting for legislation, in part because the labor market has tightened enough. But also so they can loudly broadcast (and they have) their virtue to arm pro-$15/hour politicians with “see, even Amazon thinks it’s the right thing to do” and convince reluctant politicians that “hmm, looks like business is actually OK with it.”

It’s an old strategy designed to give politicians ammunition and/or cover to force Amazon’s competitors to absorb the higher costs as well. No wonder Amazon tasked Jay Carney with the lobbying effort, being Barack Obama’s former press secretary and well-connected to Washington establishment.

And the Washington Examiner has already sniffed out this strategy in one of their many columns accusing Amazon of supporting a $15 minimum wage to cynically serve its own interests (see attached URL).

This is just one more of the countless examples of one company weaponizing minimum wage to hurt another, and quite frankly a long history of companies weaponizing government regulation in general going all the way back to America’s very first federal regulatory legislation: the 1887 Interstate Commerce Act.

One day the Economics Correspondent will write a column on that fascinating but somber story.