Former Fed Vice Chair Alan Blinder: All for 43.8% Capital Gains Taxes Because It'll Turn Out Like 1986 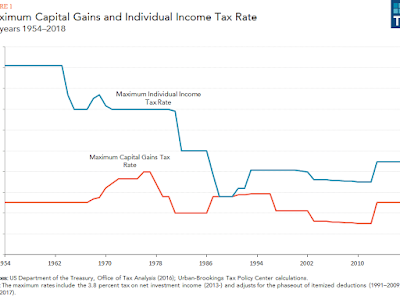 When questioned by CNBC commentators if raising capital gains taxes to century-plus records in the middle of what Treasury Secretary Janet Yellen and Federal Reserve Chairman Jerome Powell call a “fragile recovery” is a good idea, Blinder threw out a list of excuses why a 43.4% capital gains tax was harmless.

First, he said he’s always believed the top income tax rate and top capital gains rate should be the same. That’s not an argument for economic growth but OK, that’s his personal preference.

Then Blinder dismissed risks to investment and asset prices citing the Reagan Years as precedent. According to Blinder…

“Go back to 1986 which is the last time that the Congress actually equalized the tax rates on gains and ordinary income—the 1986 tax reform, widely applauded by economists. That did not send capitalism into a nosedive. The later part of the eighties were very good. You may remember the stock market went to crazy heights in 1987, then plummeted, but the economy kept rolling along right through all of that.”

Well in the case of 2021 the stock market might possibly also keep rolling given the trillions of dollars of cheap money the Federal Reserve continues to pump into inflating asset prices, a policy that carries inherent risks in and of itself just as Fed cheap money in the late eighties inflated the commercial real estate bubble that collapsed and precipitated the 1990 S&L Crisis.

However Blinder’s comparison to 1986 was more full of holes than Swiss cheese, and as an esteemed Princeton economist and former Fed Vice Chairman he’s well aware of critical differences between then and now that he clearly omitted by design.

1) The U.S. economy was not in a “fragile recovery” in 1986 with a once-in-a-century viral pandemic gripping the world. It was entering the later stages of the Reagan Boom.

2) In 1986 the income and capital gains rates were equalized at *28 percent* not 43.4. Leaving out the actual rates was a huge breach of disclosure.

3) In 1986 income and capital gains rates were indeed equalized, but the capital gains rate only rose eight points from 20% to 28% while the top income tax rate was lowered from 50% to 28%, a whopping decrease of 22 points.

No wonder the economy did quite well given that colossal detail that Blinder left out.

So if the GOP proposed a repeat of 1986, cutting the top income tax rate by 22 points and raising the capital gains rate by only eight, does anyone think Blinder would be praising it? Would he claim “all economists applauded it in 1986 so let’s do it again?” The Correspondent will bet the Fed’s entire next QE that he’d be calling it fiscally irresponsible and warning of impending disaster.

So much for using 1986 as a model, or rather anything more than just the one piece he cherry picked out.

4) In complete contrast to the 1986 reform where capital gains taxes rose slightly and income tax rates nosedived, Joe Biden is proposing raising both—the top income tax rate slightly, but the top capital gains tax rate by nearly double and, at the risk of repeating myself, a peacetime record. Even tax-happy FDR and Jimmy Carter stopped at 40% but Biden wants to outdo them all.

And remember that Biden wants to raise the corporate tax rate too, so call it a trifecta.

Blinder is brazenly attempting to sell Biden’s tax plan as comparable to Reagan’s 1986 reform, but the latter was a huge net tax cut and the capital gains rate stayed well below the peak. Biden is raising everything and breaking century-long records to the upside.

Finally Blinder capped off his argument with “the evidence is on our side.”

What evidence? The one piece he presented or the 90% of the remaining evidence he deleted?

Deliberate, masterful, and meticulous cherry picking and omission of facts by Professor Blinder. Chalk another one up for the reputation of present and former Federal Reserve officials.

ps. All these proposed tax rates are for federal taxation only. Tax rates in many states, particularly blue states, are at historical records too.