4 MIN READ - Some historical and MMT observations on the Venezuelan bolivar’s continuing collapse from the Cautious Optimism Correspondent for Economic Affairs and Other Egghead Stuff. 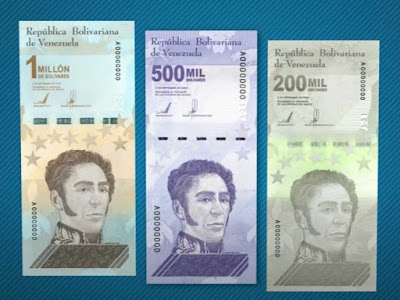 If this sounds like just another manifestation of the socialist state’s hyperinflation problem… well, that’s not the least of it.

The Economic Correspondent would like to remind readers that these new banknotes are denominated in the recent “bolivar soberano” (BsS), not the original pre-Hugo Chavez bolivar.

After losing much of its purchasing power through the Chavez years, the currency underwent a reform whereby citizens’ bolivars were converted to the new “bolivar fuerte” (BsF) at a rate of 1,000-to-1, shaving three zeroes off the old bolivar's banknote denominations.

Put another way, for every 1,000 bolivars a Venezuelan submitted to a commercial bank, he/she received a single bolivar fuerte in return. Bank accounts were also automatically converted via central bank directive.

In a cruel irony, “bolivar fuerte” translates to “strong bolivar.”

Inflation accelerated throughout the rest of Chavez’s presidency up to his death and continued into the Maduro presidency.

The newer bolivar fuerte lost 99% of its value from 2007 to 2013, a period when global oil prices were still high. But the currency’s collapse worsened—into hyperinflation—when worldwide oil prices began a prolonged decline in late 2015.

By 2018 BsF banknote denominations had grown so large that another currency reform was announced. The bolivar fuerte was replaced by the bolivar soberano (BsS or “sovereign bolivar”) at a conversion rate of 100,000-to-1, effectively shaving five zeroes off the old denomination.

And today Venezuelans have started carrying 1-million BsS notes in their wallets that by the time of this writing are worth less than 50 cents.

So don’t let the 1-million bolivar banknote fool you. When accounting for past currency reforms:

Yes, Venezuela has joined the Zimbabwe club, although it took several years longer to get there and multiple currency reforms have manipulated banknote denominations to deceptively low levels—like 1-million BsS.

On a side note, many MMT devotees (although not so much the academics) have claimed Venezuela’s tragic hyperinflation is not due to moneyprinting but rather a collapse in economic output. A few of the faithful even argue inflation is not caused by money at all.

As the explanation goes, Venezuela’s socialist policies have produced such a decline in the production of domestic goods and services that there are just too few things to buy with the money available. It’s the lack of things to buy to blame, not too much money. An ironic attribution given how many MMT'ers openly call for socialist policies themselves.

Well production has indeed declined in Venezuela, but the math doesn’t come close to adding up.

Setting aside higher velocity which admittedly is a secondary factor in hyperinflations, a 100 trillionfold increase in prices would require real GDP to collapse by 99.999999999999% (that’s twelve nines after the decimal place), a far lower level of output than even indigenous natives managed centuries before the arrival of the Spanish.

Twelve nines after a decimal place is hard to fathom, so let’s put a 99.999999999999% collapse in output in terms of the U.S. economy. If such a decline were to occur in the United States, our $22 trillion GDP economy would contract to 22 cents in real terms.

So if a loaf of bread costs one dollar, the entire annual economic annual output of the United States would be reduced to six slices of bread.

That’s it. No production of anything else: houses, cars, medicine, transportation, clothing, energy. The productive effort of the entire USA would yield six slices of bread for the whole country to eat meaning literally the entire country would starve to death.

As bad as Venezuela’s production problems are, reduced output simply can’t explain that kind of hyperinflation.

More sophisticated MMT’ers argue the real problem is Venezuela broke MMT's rules and was dumb enough to borrow in U.S. dollars and, as its currency weakened, the government was forced to print more and more bolivars to repay its dollar-denominated obligations.

But then why was Venezuela “dumb enough” to borrow in dollars? Why didn’t it follow MMT rules: borrow and promise to repay international creditors in Venezuelan bolivars?

The answer is pretty obvious if you’re an international creditor. No one outside Venezuela would also be dumb enough to lend on those terms because they wouldn’t trust the Chavez and Maduro regimes not to inflate away the value of their debt obligations.

If you lend a million U.S. dollars today and agree to be paid back at the official exchange rate on that day (say you're promised 1-trillion BsS), sure you might get your 1-trillion BsS back in a few years but they’d be worth less than a loaf of bread too.

Which is one of the many problems with the MMT adage that “sovereign issuers of currency can print enough money to pay all their bills so long as they borrow in their own currency.” As Austrian economist Robert Murphy says, you might get away with that for a while so long as you’re responsible with your currency and maintain a clean reputation with other countries. But the moment the world sees you abusing your privilege as a sovereign currency issuer, you quickly lose the privilege and they stop lending to you in your currency. And then you wind up like Argentina or Greece in the 1980's.