Capital Theory: Productivity of the Ever Given vs 16th Century England's Merchant Fleet 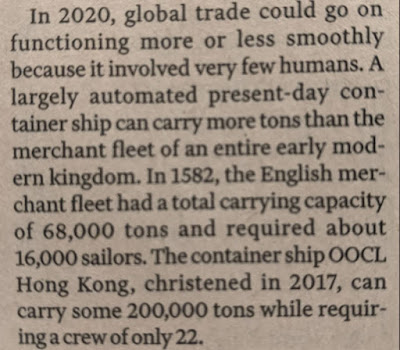 1 MIN READ - Cautious Rockers who monitored the temporary closure of the Suez Canal may have seen images of the Ever Given’s enormous stack of shipping containers. Imagining the sheer quantity of goods transported on that single vessel prompted the Cautious Optimism Correspondent for Economic Affairs and Other Egghead Stuff to dig up this impressive tidbit from economic history:

“Progress factoid: One modern container ship holds 3 times the cargo of the entire 16th century English merchant fleet and uses less than 1% of the crew.”

(H/T to George Mason University’s Lawrence H. White for posting this excerpt from the Financial Times)

The Correspondent hopes to post a series of articles in the future on the subject of capital theory: a fancy way of describing “labor saving capital tools and machines that increase worker productivity and raise material living standards,” or the same economic force that makes the 21st century merchant crew’s life incalculably easier, safer, and wealthier than it was just fifty years ago let alone five hundred.

Given the list of subjects remaining on the Correspondent’s to-do list, capital theory may have to wait a while. In the meantime, the Ever Given and modern day container ships serve as just one illustrative example among history's tens of thousands that have delivered mankind from the caves into the ways of modern industry.