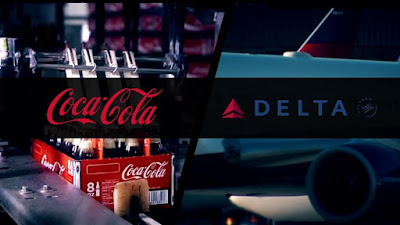 The Cautious Optimism Correspondent for Left Coast Affairs and Other Inexplicable Phenomena heard a headline on CNBC today that Georgia companies are now reeling from boycotts “coming from both sides.” (the political Left and Right).

The Correspondent suspects many of those corporate executives privately supported the law, but calculated that making brave liberal-friendly noises would appease bloodthirsty activists enough to limit the business backlash and assumed talking a good virtue-signaling facade wouldn’t cost anything.

Of course they’re now finding out they miscalculated on the cost side. By once again volunteering to woke themselves into politics they triggered counterboycotts from conservatives. Now some executives are probably second-guessing themselves and considering maybe it would have just been cheaper to stay quiet.

The unfolding of this script reminded the Correspondent of prescient comments last summer from Ben Shapiro on the subject of leftist boycotts:

SHAPIRO: “The best case scenario is everybody leaves everybody alone, but that’s not happening.”

“They [corporations] are just going to cave to the Left. Because they always understand the Right is going to be good and they’re not going to provide any sort of real ramification for the corporation swinging Left.”

“But the Left will boycott. The Left will be loud. So as a matter of due course they [corporations] will move in that direction.”

“The second worst-case scenario is [conservatives also] boycott everybody because, with the possibility that with mutual assured destruction, corporations either learn that these boycotts are ineffective or corporations cave to everybody and we have left and right-wing corporations… …Complete fragmentation of our culture due to corporate cowardice.”

“I’m not sure it’s avoidable. It’s sad. It shouldn’t be like this… …I guess that’s the way we’re going as a country.”

The fragmentation scenario may not be a fait accompli just yet, but Shapiro was dead-on right that sooner or later the Left was going to trigger a boycott backlash from conservatives who for years have grown sick of playing nice while corporations cave to every leftist demand and give the squeaky, coercive, militant wheel the oil... every... single... time....

So just as the monolithic liberal media pushed their one-sided power too far for decades and triggered the creation of Fox News and conservative radio/Internet (which liberals complain about as if they just materialized in a vacuum), so too now has the Left pushed the edge of the boycott envelope too far, creating a new boycott adversary and an even more divided society.