4 MIN READ - From the Cautious Optimism Correspondent for Economic Affairs and Other Egghead Stuff. 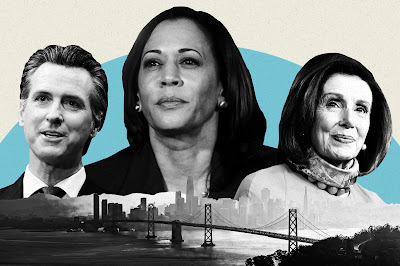 As some Cautious Rockers already know, the Economics Correspondent lives (serves time, is incarcerated, repays his debt to society) in San Francisco.

Now that we all know about the record $360 billion blue state bailout that is baked into the recent $1.9 trillion federal Covid-relief stimulus package, the Correspondent thought he’d share some of his experiences over the years with how California’s state and local governments wisely and responsibly spend their tax dollars, yet have found their finances in a precarious position by no fault of their own. Peruse through this short list at your leisure.

Corroborating links included with each of the roughly twenty examples.

1) Let’s start with “Pelosi’s Tunnel” which is BART’s (Bay Area Rapid Transit) proposed extension line that they just don’t have the funds for since BART typically loses $30-$40 million a year.

The $140 million earmarked for Pelosi’s Tunnel was yanked at the last minute, but Bay Area property and sales taxes subsidize approximately $300 million of BART’s near $1 billion annual budget, and those cities and counties will be getting stimulus money in an indirect transfer from federal taxpayers to BART.

Moreover the BART 2020-21 annual report indicates the system already received approximately $250 million from the original 2020 CARES Acts. Nevertheless BART will continue to receive transfers from the local governments getting a slice of California’s over $30 billion Covid stipend from President Biden, errr… I mean the next generation of red state taxpayers.

1A) 2017: A BART janitor makes $270,000 in one year with superhuman amounts of overtime, and is then caught by local news reporters sleeping on those overtime hours in a BART station supplies closet.

The Correspondent saw the local news video where the reporters banged repeatedly for 10 minutes on the closet door before the janitor opened it, and it was clear from his face he had been sleeping.

1D) The Correspondent also has reliable inside information of BART ticket booth attendants earning $90,000 a year in pay back in the year 2000. In today’s money that’s $137,600 a year. He won’t share the details of his past interactions with those rude, lazy, and apathetic attendants behind the glass.

Of course these employees are all public union members.

2) Most of us have heard about the “Poop Patrol” that cleans up human feces and syringes from the sidewalks of San Francisco. The job starts at $185,000 a year in pay and benefits.

3) Well maybe it would just be cheaper to have 24-hour public toilets instead, even though trust me when I say they’re absolutely disgusting.

4) The Correspondent generally supports the police and definitely backs them in the whole “defund the police” and BLM mania of late. However as underpaid as many cops are in many red state cities, and as hard as their jobs are, there has to be *some* limit to their compensation in blue states.

Unfortunately it wasn’t a fluke. San Francisco’s top paid 19 deputies raked in an extra $4.16 million in overtime or an average of $219,000 on top of their base salary.

5) The top paid San Francisco police officer made $592,000 last year although the city calls that a unique case.

6) But it’s not as unique as they’d like you to believe.

The Correspondent couldn't find the old article but remembers several years ago San Francisco’s highest paid employee being a police sergeant who made about $550,000 in a last year “pension spike” where his retirement pay for the rest of his life would be 95% of his final year’s compensation.

When asked if the pay was fair to the taxpayer he replied “I’ve paid plenty in taxes.”

OK at least these are the Chief and the City Manager, but half a million dollars is still a bit high wouldn’t you say?

10) But let’s not forget the lesser employees just yet. And let’s not let the San Francisco Bay Area have all the fun either.

12) And let’s spread the wealth a little to all of California which includes both expensive cites and affordable rural areas.

Last year 340,000 of the state’s public employees pulled in more than $100,000 a year in pay or pensions (which excludes non-cash benefits) including..

13) And the same egregious offenses occur in other deep blue states that will be receiving federal bailout money although the Correspondent doesn’t know those examples as well.

14) During the Obama administration when controversies began to erupt that federal government employees were on average earning over double their counterparts in the private sector, the press asked why they were being paid so generously.

“Public employee unions say the compensation gap reflects the increasingly high level of skill and education required for most federal jobs… …’The data are not useful for a direct public-private pay comparison,’ says Colleen Kelley, president of the National Treasury Employees Union.”

15) Finally, the discussion so far has only been about government employee salaries and compensation and there’s been no mention of costs for illegal immigration which would take a short book.

But just a taste includes:

15B) California’s budget includes money for free healthcare for illegal immigrants. It’s hard to estimate the total cost, but the state recently added illegals age 19 to 25 to MediCal rolls at an estimated annual cost of $260 million a year.

California already covers all illegals 18 and under at a cost surely several times the $260 million budgeted for age 19 to 25.

And Gavin Newsom wants to expand healthcare to illegal seniors for another $80 million.

All in all MediCal payments to illegals certainly exceed $1 billion per year.

15C) But this is all peanuts compared to cost of educating the children of illegals. There are an estimated 750,000 children in California public schools who have illegal immigrant parents.

At a taxpayer cost of about $13,000 per student (higher if they aren’t English speaking) California spends at least $10 billion per year on free education for illegal children or anchor babies.