Since then the future House Speaker has been slammed by pundits over two errors:

1) Denmark has no statutory minimum wage. However it does have plenty of pro-union laws and the unions have secured higher wages for low-skilled workers.

2) Many European countries with high minimum wage make exceptions for younger workers, who tend to be even less skilled. In the Netherlands, for example, a 15 year old can be paid 2.92 euros per hour ($3.50) even though the adult fulltime minimum wage is 9.72 euros ($11.66) making *it* the compromise, not $15 (see Netherlands minimum wage schedule at the bottom of this post).

But AOC picked the most favorable country for her case from the over 40 in Europe and with a population smaller than metro Atlanta.

However the Correspondent has yet to see an even bigger glaring error in her reasoning being reported.

Simply going on Google Maps and looking at customer/tourist photos of McDonalds locations in Denmark discloses the consequences of such generous pay raises (see photo). 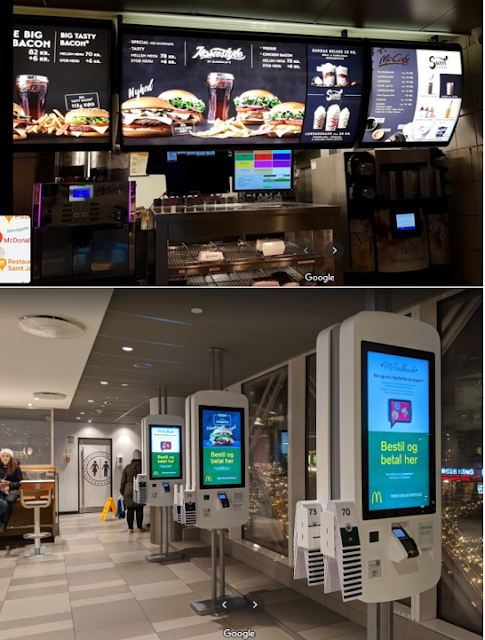 In the top photo the store menu reveals if you want a chicken sandwich meal with a small (what they call medium) fries and drink it will cost you 75 kroner or about $12.50USD.

If you want the double bacon sandwich large meal (what we call medium) it's 88 kroner or just shy of $15.

The Correspondent hasn't been to a McDonalds for a while. He lives in San Francisco where he's seen the phased $15/hour minimum wage close down several McDonalds locations, as well as IHOP, Panera Bread, Burger King, Subway, and countless local restaurant names CO readers would probably not be familiar with.

But he suspects if one walks into a McDonalds in say, Texas (a state that abides by the federal minimum wage of $7.25/hour) the menu wouldn’t read $12.50 for a small chicken sandwich meal or $15 for a double bacon sandwich meal. In fact the Correspondent found a 2017 San Antonio Google Maps photo with a $6.09 Big Mac meal.

The Correspondent would also wager once the price is raised to $12.50 or $15, a lot of Texan McDonalds customers will quickly pay a whole lot fewer visits—as will Georgians and Iowans and the residents of dozens of other states—and the rapid contraction in demand will mean a lot of workers have less work to do and lose their jobs.

Which leads us to the bottom tourist photograph. Denmark has already shown us what's in store for the human cashiers in U.S. McDonalds if AOC gets her way.

ps. Every tourist photo the Correspondent found of a Danish menu board had zero human employees standing in front of it at the counter. In fact, human employees were rather scarce in all the photos as were customers. Probably not a coincidence either.