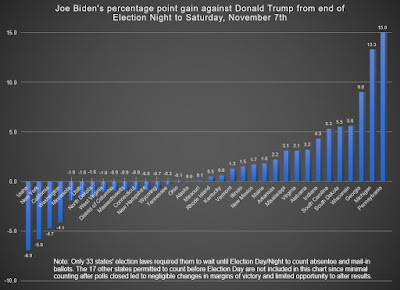 3 MIN READ - The Cautious Optimism Correspondent for Left Coast Affairs and Other Inexplicable Phenomena confesses to stirring up quite a discussion last Friday when he suggested that Joe Biden’s miraculous post-Election Night erasure of Donald Trump’s sizable leads in four critical battleground states may have been a little too miraculous.

The huge comeback was credited to record numbers of mail-in ballots that were still being counted after hours, a phenomenon that, if valid, should have occurred in just about every other state too since fears of Covid and social distancing are prevalent everywhere, not just in Wisconsin, Michigan, Pennsylvania, and Georgia.

As before, the four states where Biden enjoyed the largest gains after polls closed--three of them colossal (see chart)--happened to not only all be states he trailed in, but also the very four he needed to save any chance of winning as the window of opportunity had almost closed on him.

Based on the 33 states that mandate waiting until Election Day/Night to begin counting absentee and mail-in ballots, the odds of the four best-performing randomly matching the exact four Biden needed to win are 40,920 to 1.

Therefore such a miracle is not scheduled to occur again in a U.S. presidential election until the year 165,700 A.D. That’s U.S. history beginning in 1776 elapsing another 679 times before this should happen again.

The Correspondent’s friends “shared” the original story and sparked many heated debates elsewhere across Facebook with some skeptical commenters demanding more states and more data.

So Cautious Rockers get first dibs at the exclusive research available at CO Nation. Please enjoy the chart before it's fact-checked out of existence.

Note again that the four states where Biden enjoyed the largest—in three cases absolutely massive—improvement in vote percentages against Donald Trump just happened to be the very four that:

3) Were already long anticipated to be critical battleground states, and...

4) He trailed Donald Trump in (all four, plus NC), and most importantly…

5) He critically needed to win since Donald Trump was performing far better than polls had predicted and the window to salvage a victory was nearly closed.

ps. Note also how many points Biden needed in each state and how many he got.

[End of main article. Readers who wish to know more about the source data read on]

I. Here is an example of how a state’s change in margin is calculated:

VIRGINIA: At the point that NBC News had both called a winner and the percentage of precincts in exceeded 75%, Joe Biden held 52.4% of votes and Donald Trump held 46.0%, a lead of 6.4 percentage points.

On Saturday, November 7th, after the bulk of absentee and mail-in ballots had been added to count totals, Joe Biden held 54.0% of votes and Donald Trump held 44.5%, a lead of 9.5 percentage points.

OHIO: At the point that NBC News had both called a winner and the percentage of precincts in exceeded 75%, Joe Biden held 45.2% of votes and Donald Trump held 53.3%, a deficit of 8.1 percentage points.

On Saturday, November 7th, after the bulk of absentee and mail-in ballots had been added to count totals, Joe Biden held 45.2% of votes and Donald Trump held 53.4%, a deficit of 8.2 percentage points.

(It’s worth noting that Ohio was a major battleground state where a large number of mail-in ballots, largely Democratic, were expected and received)

The Correspondent spent many hours combing through Election Night video from NBC News to find leading or trailing margins of every state that was called and then recorded data when the percent of precincts in exceeded 75%. Using vote percentages with only 2% of precincts reporting was unreliable and could lead to wild changes in margins leading to November 7th.

Then the Correspondent compared the leading or training margins on Saturday, November 7th when AP called the election for Biden and calculated the difference.

For the five critical states that remained uncalled (WI, MI, PA, GA, NC) the Correspondent noted the vote percentages for each candidate at 12AM ending Election Night.

Although he has data for NC, AZ, and NV, those three states permitted counting absentee and mail-in ballots prior to Election Day/Night and therefore don’t appear in the chart. Also, as of this posting North Carolina totals have not changed since late Election Night.

A few states had not yet reached 75% precincts in by the time the NBC livestream ended late at night. Therefore the Correspondent was forced to seek another livestream that ran later. However most livestreams have been taken down from YouTube and the only one he could still find was NTD--not his favorite source but all he wanted was numbers--that had later evening data on just a handful of states.

Alaska and Hawaii closed so late that no data was available in either the NBC or NTD livestreams before they ended. Therefore the Correspondent has no Election Night totals for those two states which he considers uncritical anyway. Hawaii is particularly inconsequential since absentee/mail-in ballots can be counted early in that state.

Finally, the states of Maine. Maryland, Massachusetts, and New Jersey had not reported 75% or more precincts in before either livestream ended. Therefore the Correspondent had to use Election Night data using only 58%, 67%, 73%, and 61% of precincts for those states respectively. Maryland and New Jersey are not included in the chart due to early absentee/mail-in ballot counting.