Inflation and Deflation Fallacies Part 4: “My Grocery Bill Went Up Which Proves the Country is Experiencing Inflation” 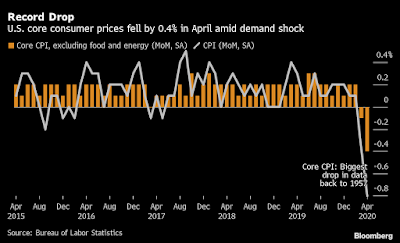 4 MIN READ - This is not one that would typically be on the Economics Correspondent’s list, but a lot of comments in previous articles by well-meaning readers made it worth examining.

To define inflation, one has to measure it comprehensively (ie. everywhere, not a single product, industry, or sector).

Going back once again to the Quantity Theory’s Equation of Exchange tautology:

…changes in “p” reflect macroeconomic changes in prices, ie. across the entire economy—in this case the United States. Or...

And as we all know, price movements vary across industries or even individual products.

For example, the price of healthcare has been rising relentlessly for decades, but the price of DVD players has also fallen consistently for years and years. I’ve never heard anyone argue “DVD players have been getting cheaper for fifteen years. That proves the economy is undergoing massive price deflation” and for good reason.

So if we focus on just a single sector then yes, the Economics Correspondent has seen his own grocery bill go up too, particularly during the initial months of the spring pandemic. There was definitely food price inflation in March, April, and May due to massive new demand for at-home eating combined with lower supply from Covid-related processing and supply-chain bottlenecks.

In fact the Bureau of Labor Statistics reported in April that food prices rose at the fastest monthly pace since 1974.

(the BLS also reports food prices have moderated significantly since supply factors were resolved in the summer, something else the Correspondent has seen reflected in his grocery bill).

But to determine if the dollar is losing its overall purchasing power requires looking at all prices, not just grocery prices.

During the same period energy prices fell far below their pre-pandemic levels. So did airline fares and hotel rates. Auto insurers gave rebates to their policyholders reflecting lower claims costs. Rents in many large cities plummeted including the Correspondent’s own city. Used cars and trucks, and car and truck rental prices fell. Evidently a great deal of men’s apparel fell in price although the Correspondent can’t speak for women’s apparel (women readers feel free to comment). Nancy Pelosi’s hair stylist is even reported to have lowered her prices.

There are undoubtedly other sectors that saw falling prices but the Correspondent doesn’t track them all.

All these falling prices and other rising ones are factored into changes in the general price level (ie. price inflation).

Most people instinctively understand this whether they realize it consciously or not. If they notice the price of baseball cards is going up they typically don’t conclude the country is experiencing a major price inflation. And food prices, while a much larger component of the economy, represent only one segment of the market as well.

So American food purchases are much larger than baseball card purchases. Food purchases represented a full 9.7% of GDP in 2019, although that includes restaurant dining which plummeted during the spring lockdowns.

But even when food prices rise, the other 90.3% of GDP must still be accounted for to draw final conclusions about inflation.

Incidentally there is another theoretical basis for not overweighting one sector’s prices too much, one we will discuss in greater length in the upcoming final column of this series. It is:

If consumers are forced to spend more on food they will necessarily have less money remaining to buy other products. The corresponding fall in demand for those other products will tend to drive a reduction in prices elsewhere.

The only reason this paradigm will fail to materialize is:

….in some combination that results in such a surge in overall prices that other sectors become more expensive too.

Well during this spring that perfect combination definitely did not play out.

Both of these had massive inflation written all over them, but…

And that’s why food prices alone can’t tell us if the entire country is undergoing inflation or not.

ps. The Correspondent believes it’s completely understandable that Americans and consumers around the world tend to equate grocery prices with inflation for several reasons:

-Grocery shopping is near universal. Almost everyone sees grocery prices but not everyone sees baseball card prices, bulldozer prices, or ethylene prices.

-People tend to buy the same grocery products over and over and are exposed to even minute changes in price in repeated, short intervals. In other words the act of weekly or biweekly grocery shopping provides a more frequent sampling of apples-to-apples pricing than any other consumer activity with the possible exceptions of buying gasoline, cigarettes, or paying one’s monthly cell phone or cable bills.

However people only notice the change in rent once a year when they renew the lease. They usually only notice a change in home prices when they’re home shopping, and the house they’re buying is never exactly the same house in the same location that they previously bought (unlike buying a twelve pack of Budweiser this week and a twelve pack of Budweiser again next week from the same store).

People only notice changes in used car prices when they buy another used car, and even then only if they buy a car of identical make, model, age, mileage, and options. No one concludes major price inflation when they trade in their used Kia for a used Lexus.

And people only notice their auto insurance rebates twice a year, assuming they even associate rebates with lower inflation at all.

In other words, consumers have much better and more frequent comparative information when sampling changes in food prices than they do in many sectors that experienced deflation during the spring outbreak and lockdowns. Therefore they acquire an observation bias with food prices and tend to associate them with a more general inflation.

In the last installment we’ll address a basket of fallacies employed by economists and policymakers everywhere such as “cost push,” “demand pull,” labor unions, and greedy businessmen.