Apoplithorismosphobia: (n.) The fear of monetary and economic deflation. 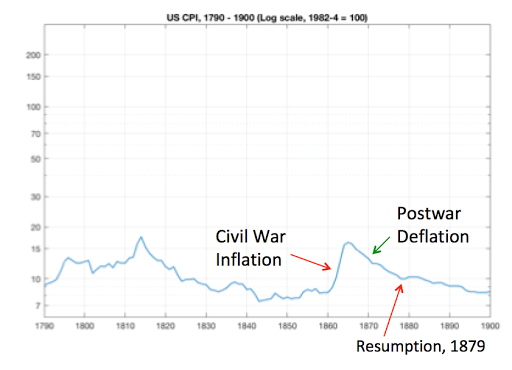 The view that falling prices invariably produce rapid and painful recessions and depressions is accepted almost as religious dogma among central bankers, government policymakers, the press, and many academics.

The hypothesis, which has clearly not been closely examined historically or theoretically, is that if consumers and businesses see prices falling they will put off purchases and the loss of demand will plunge the economy into a “deflationary spiral” from which it will need decades to recover.

And according to many deflationphobists, prices don’t even have to fall. In the minds and writings of mainstream economists like Paul Krugman, Ben Bernanke, and Larry Summers no inflation or even too little inflation—say, prices rising only 0.5% or 1% per year—is enough to produce a recession or stymie a recovery

"Falling prices might sound like a good thing, and in individual cases they often are, but a falling general price level is usually associated with severe economic strains. Why buy anything today if it will be cheaper next week? The end result tends to be falling output, rising unemployment, falling wages and a large increase in the real burden of debt."

What could be wrong with that reasoning? Surely if prices fall, or even stay flat, no one will buy anything and we will experience another Great Depression, right?

Actually there are plenty of glitches in this reasoning.

In fact at the extreme no one really stops buying completely. Imagine if everyone stopped buying food because they felt food prices will be cheaper in a year. All of humanity would starve to death.

The same is true for not paying rent or the mortgage or the power and gas bill. In most places we’d die from exposure to the elements. Clothes, medicine, and many other consumables are absolute necessities and no one is going to stop buying them just because they might be 1% cheaper in a year.

But what about discretionary goods? Surely if discretionary consumables fall in price then purchases will grind to a halt, right?

No. Consumer time preferences play a strong role even with nonessential purchases.

Let’s take Starbucks coffee with 0.5% annual deflation for example. To paraphrase Austrian economic historian Thomas Woods, does anyone really believe Starbucks customers are thinking “I’m not going to have that cup of coffee this morning, because next year it will be two cents cheaper?”

A year later are consumers thinking “Those Starbucks people must think I’m some kind of a sucker, it’s going to be another two cents cheaper next year?”

Of course not. Starbucks customers, even armed with an expectation that prices may fall 0.5% a year, are still going to buy their coffee today—because of time preferences.

But Starbucks coffee is a relatively cheap item. The savings are much larger on big ticket items so consumers will certainly hold off on those purchases, right?

Well let’s look at one of the biggest ticket consumer goods there is: cars.

According to Woods, in the deflationphobists' view of the world “None of us are going to buy anything until we’re on our deathbed and then we’ll finally reach out and grab an iPhone just as we’re expiring.”

The same time preference paradigm is even truer for businesses.

Companies that need to make their capital purchases and investments now in order to secure greater revenues and a return on investment tomorrow aren’t going to defer their plans by a year hoping to save 0.5%. In the year they wait their operations will be so disrupted (not to mention the loss of their higher revenue streams) that the costs would be far greater.

Well no need for theory. Let’s just look at actual evidence in possibly the most deflationary sector of the economy: consumer electronics. Everyone knows if they buy a phone or a TV or a computer today, a better version will come out in six months for less money, often at a discount greater than 1% or 2%. It’s been that way for decades.

Are the phone, TV, or computer industries in Great Depression as a result? Has there been a 30 or 40 or 50 year slump in consumer electronics because no one is buying? Of course not. It’s been possibly the hottest growth industry all that time. Because there are some things that human beings just want now and they’re not going to put their entire lives on hold for a year or two just to save 0.5%... or 1%... or 2%.

And to the extent that consumers might really curb their purchases slightly the necessary result would be greater savings (ie. deferral of consumption), an indispensable key to economic growth.

Real savings were a critical component fueling the explosive growth of the American economy in the late 19th century, or Great Britain during the Industrial Revolution, or Japan after World War II, or China in the last 30 years, as opposed to the sluggish growth plaguing most of the overconsumption world in the 2000’s.

Because the actual physical tools and machines that make workers more productive and new technologies available don’t exist if consumers spend all their income on immediate gratification now instead of preserving some share of the productive economy to produce the advanced tools and machines that will fuel a larger, more prosperous economy tomorrow.

Deflationphobic economists assume that spending and consumption are the key to economic growth, neglecting the critical precondition of saving. Someone must forgo consumption in the present, but many mainstream economists—particularly Keynesians—believe central banks printing more money and transferring it to banks in exchange for bonds (their idea of saving) is a credible substitute for tangible capital resources. It’s not.

(Note: this is the larger concept of capital theory which the Correspondent will write about in greater detail later).

OK so the theory all sounds good, but surely empirical evidence supports the deflationphobia view, doesn’t it?

Well it just so happens we have historical evidence in the United States and plenty of it: over 100 years in fact.

From 1800 to the establishment of the Federal Reserve in 1914, prices nationwide fell about 42%. That’s slightly faster than a compounded average of 0.5% deflation per year.

Granted there were some ups and downs in that century-plus, namely inflations during wars such as the War of 1812 and the Civil War, and an experiment with artificial bimetallic inflation in the early 1890’s, accompanied by slightly more rapid deflations between inflationary periods.

But for the vast majority of those 114 years prices fell in the United States.

Was the result a 114 year Great Depression that dwarfed the 1929-1946 Great Depression? No, the United States grew into the world’s largest economy in what’s considered an economic miracle of that period by all but the most hardcore Marxist economists and economic historians.

This presents quite a quandry for the deflationphobists who warn 0.5% deflation or even zero inflation will lead to disaster.

The same story holds true in Great Britain, Canada, Germany and the industrialized European nations of the 19th century. Prices gently fell and far from tanking, their economies boomed. So both the empirical evidence, as well as the more closely examined theory, contradict the mainstream view that insufficient inflation or even benign deflation will plunge economies into deep depression.