2 MIN READ - The Cautious Optimism Correspondent for Economic Affairs and Other Egghead Stuff delivers his previously promised update on the Federal Reserve’s unprecedented efforts to provide liquidity to financial markets and its predicted effects on inflation. 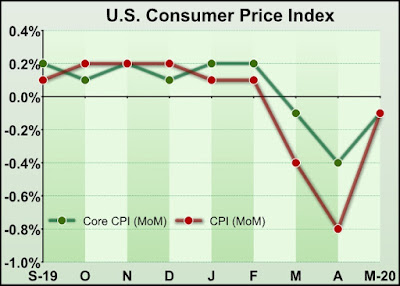 Now the Economics Correspondent is open to criticisms that official CPI calculations use flawed methodologies to determine the cost of housing, and that including or excluding the officially “volatile food and energy sectors” can alter the results. Although for the record food prices have recently risen while energy prices have plummeted while economists predict prices may finally start to rise next month reflecting the recent rebound in oil markets.

However the Correspondent’s larger point is that according to some, none of this was supposed to happen. Inflation was supposed to be roaring by now simply because the Federal Reserve began historic and aggressive efforts to create new money to counter the coronavirus slump in mid-March.

The Fed has succeeded in creating new money, and a lot of it.

Since that historic week in March the monetary base has increased 47% from $3.53 trillion to $5.199 trillion.

These numbers are all incredible and many are unprecedented, eclipsing even the alarming gains during the 2008 financial crisis. And all of this in a major recession with output falling.

So with far more money chasing even fewer goods and services, why isn’t inflation roaring? Shouldn't the U.S. be one step shy of Venezuela by now?

More money and falling output are indeed a formula for inflation, but they aren’t the only factors that influence prices. And as the Correspondent wrote in April, falling velocity might very likely offset inflationary factors—lower velocity being the product of millions losing their jobs, income, and spending power, and firms hoarding cash as a reserve instead of spending on huge investment projects during uncertain times.

Based on the scale of the Fed’s open market operations, the Economic Correspondent believed in March and April that the Board of Governors was already anticipating plummeting velocity in ensuing months, and so far they’ve been proven right. In fact, had the Fed not engaged in such aggressive monetary operations the U.S. could already be in a severe deflationary environment by now—severe meaning not a benign -0.5% or -1.0% annualized drop in prices but something much more rapid like -5% or even closer to -10% such as during the Great Depression.

And there has been one more, unmeasured factor subduing inflation: new money has spilled over into the stock market and created “asset inflation” which is not measured in the CPI index because consumers aren’t concerned with the price of the S&P 500 Index when paying their daily living expenses.

The Economic Correspondent has never been a big fan of the Federal Reserve or monopoly central banks in general, but so far on the inflation question the Fed has been right.

What inflationary prospects lie further down the road—in the medium or long terms—will be a speculative subject of discussion in a future column.

To learn more about the importance of the money supply, GDP, and velocity’s impact on consumer prices you can go back to Parts 4 and 5 of the Correspondent’s series on coronavirus monetary policy at:

Also for a primer on open market operations and the Fed's tools for controlling the money supply, as well as the Fed’s domestic and international rationales for its aggressive securities purchase programs beginning in mid-March, Parts 1-3 of the same series are at: