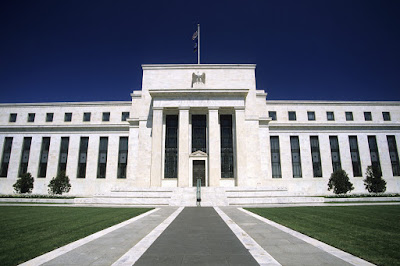 Note: This installment applies central bank vocabulary and operations mechanisms previously defined in Part 1 of this series. Readers who are not familiar with monetary theory and central banking terminology can find a primer in Part 1 at:

VI. THE RUSH FOR LIQUIDITY: OVERSEAS

It’s not just U.S. firms and financial institutions that are rushing to bolster cash positions for uncertain times. The need for dollars is equally great overseas.

As a reminder, the U.S. dollar is the preeminent world reserve currency for settling international balance of payments. Overseas companies need dollars to buy from and sell to firms in other countries. They borrow, invest, spend, and repay debt both with dollars as well as their own domestic currencies.

Consequently international banks that lend to such firms also require dollars, and their own central banks maintain dollar holdings as well.

As the issuer of the world’s reserve currency, the Federal Reserve has long accepted its responsibility of de facto central bank to the world, at least to keep the wheels of international commerce well-oiled.

As it has become increasingly clear that social distancing measures to stem the spread of the virus will strain the economies of the world, overseas firms have also scrambled to stockpile dollars as a hedge against uncertain times—in some cases by selling assets but primarily through borrowing.

Hence overseas banks have seen a huge demand for dollars and they in turn have tried to monetize paper assets in their portfolios through their own central banks to bolster liquidity.

But foreign central banks aren’t authorized to issue dollars, only the Federal Reserve. So consonant with its international responsibilities the Fed has launched large scale asset purchases in open market operations with not only its domestic primary dealers but also its long-established foreign ones.

The Fed has also boosted its dollar currency swap lines with standing participant central banks such as the Bank of England, Bank of Canada, ECB, Bank of Japan, and the Swiss National Bank.

A currency swap line is a facility by which the Fed accepts currencies of other countries and provides dollars in return.

Both of these lists (overseas primary dealers and foreign central banks) are missing a lot of countries. So on March 19th, seeing soaring demand for dollars from other regions, the Fed established new currency swap lines with the central banks of Australia, Brazil, Denmark, South Korea, Mexico, New Zealand, Norway, Sweden, and Singapore.

These countries also had temporary swap lines with the Fed during the 2008 financial crisis which were allowed to expire at crisis end.

If the Fed doesn’t supply reserve dollars to the world during a time of crisis-level demand, the imbalance of high demand and low supply will naturally result in a higher price (interest rate). Not only will some firms not be able to raise dollar balances to survive uncertain times, but those that do will pay punitive interest rates.

There’s one more less publicized but equally important international dollar crisis the Fed attempts to head off by making more dollars available: the threat of rising dollar exchange rates to foreign firms and their economies.

Under normal conditions overseas firms would gain an export advantage since their products would become cheaper for U.S. consumers.

However there’s a downside as well. Since foreign firms borrow and repay much of their debt in dollars, a stronger dollar becomes much more expensive for them to obtain. Many firms generate revenues domestically in their own currencies, exchange them for dollars to conduct overseas business, and repay their dollar-denominated debts.

A sharp rise in the value of the dollar means revenues earned in the domestic currencies exchange into fewer dollars, placing greater strain on their ability to service dollar-denominated debt.

This phenomenon is particularly crushing for developing countries since a great deal of investment in their economies comes from overseas dollars. A sharp fall in the exchange rate value of their domestic revenues will result in foreign investors pulling out as dollar-denominated losses begin to pile up.

Normally this exchange rate phenomenon would be somewhat offset by higher exports (which in turn would send dollars back to the exporting country), but with the world locked down and entering a global recession overseas buyers (consumers and businesses) are on strike. So foreign firms are getting little export benefit and plenty of dollar-debt liability.

By issuing more dollars via open market operations and currency swaps, the Fed is attempting to moderate the exchange rate rise of the dollar to prevent foreign economies from being sunk by their own rush for dollars.

One can see the obvious movements of the dollar exchange rate against several currencies in the following charts. The dollar strengthens in mid-March as the crisis unfolds and international institutions rush for dollars. Then the dollar falls as the Fed makes its own rush to provide global dollar liquidity.


So after reviewing all the reasons the Fed is taking such dramatic and unprecedented steps to increase dollar liquidity and dollar holdings—both domestically and overseas—readers might ask one very logical question:

“Fed operations might be doing a good job of accommodating demand for dollars, but won’t all these new dollars spark massive inflation and make our money worthless?”

The short answer is probably not, which we’ll explain in the final installment.
Posted by CDS at 12:00 AM