5 MIN READ - The Cautious Optimism Correspondent for Economic Affairs and Other Egghead Stuff will consider the inflationary repercussions of the Federal Reserve’s coronavirus easing operations—starting with a prerequisite primer on the general subject of inflation for anyone seeking a better understanding of the subject. 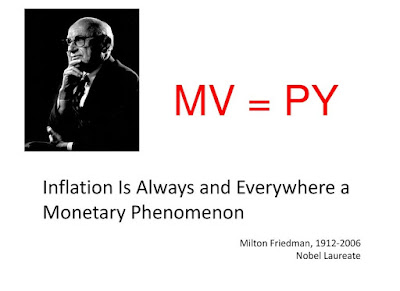 Disclaimer: It’s no secret that the Economics Correspondent is no fan of the Federal Reserve which he views as an instigator of asset bubbles and boom-bust business cycles, bureaucratic central planner of monetary policy, interest rate price-fixer, persistent inflation machine, and facilitator of endless government deficit spending.

That said, he reserves judgment on the Fed’s latest expansionary operations. While the Correspondent doesn’t hesitate to critique monetary and fiscal policies during traditional financial crises and business cycles, the current government-engineered hard stop to restrain a pandemic is unlike any recession anyone has ever seen.

However there are some universal relationships between money, GDP, velocity, and prices that apply in any economy and will certainly play out in this recession as well.

VIII. THE EQUATION OF EXCHANGE

Economists and scholars have pondered the nature of prices going back for centuries. By the early 19th century British economist David Ricardo and later John Stuart Mill had begun publishing judiciously on the effects of changing money, output, and velocity on prices although their theories were denoted via written prose.

In 1911 American economist Irving Fisher produced the first mathematical expression of those relationships known today as the Equation of Exchange (also referred to as the Quantity Theory of Money).

Now before objecting that “I don’t want to deal with math!” keep in mind this simple equation can serve the layman for a lifetime with a broad and comprehensive understanding of the forces that drive inflation and deflation.

In its simplest form the Equation of Exchange is expressed as…

p = the general price level, and

y = real GDP… or output… or technically the monetary value of all economic transactions.

(Sometimes the formula is expressed as mv = pq or mv = pt where GDP is expressed as “q” for quantity of all goods/services produced or “t” for total monetary transactions, but we will use “y” which is the standard economic variable for GDP)

The Equation of Exchange isn't some pie-in-the-sky abstract theory. It has not been overturned for more than a century and is accepted by virtually every major school of economic thought, even if some schools disagree about the ultimate policy implications of the formula or apply it with varying degrees of frequency.

The Equation of Exchange is also considered a tautology, a statement that is true by necessity or by virtue of its logical form (such as two nickels equals one dime, or four quarters equals one dollar). After all, it’s not the expression of a natural scientific law but rather one of human invention: mathematical monetary flows.

Going back to the formula, isolating p (prices) helps the student better understand the forces that drive the overall price level and inflation in general. Dividing both sides of the formula by GDP (y) gives us:

From here it’s fairly straightforward to understand the impacts of all inputs on prices.

This is the most obvious and intuitive relationship understood by most people.

Nobel Laureate and economist of the Monetarist School Milton Friedman famously said “Inflation is always and everywhere a monetary phenomenon” which is true under most conditions. He also drove around with an MV = PY bumper sticker on his car.

The most universal truth of the two expressions is the latter: the Equation of Exchange.

MONEY: Starting with money, most readers intuitively "get it."

If the central bank produces money faster than the real economy grows—either by printing lots of high denomination banknotes, creating new reserves and crediting them directly into the central government’s account, or by buying large quantities of assets with newly created reserves and forcing interest rates down—prices are going to rise.

If the central bank produces money even faster hyperinflation can result as it famously did in Weimar Germany or recently in Zimbabwe and Venezuela.

However changes in output alone very rarely produce hyperinflations or rapid deflations. The reason is simple: real output would have to rise at impossible rates to create rapid deflation.

For example, to achieve an annual 20% fall in prices real GDP alone has to grow 25% a year, impossible in either a developed or even developing economy.

And a huge share of economic output would have to be destroyed to create hyperinflation. To achieve 1,000% annual inflation the real economy would have to contract by 91% in a single year.

It is theoretically possible for 50%, 70%, or 90% of a real economy to be destroyed in a single year during wartime, but typically a government losing that badly in a war will already have resorted to hyperinflationary money creation to further commandeer resources for the military.

Incidentally under the classical gold standard of the late 19th century, the U.S. economy grew very quickly even as the money supply grew due to new gold supplies produced via mining. However, since the economy was consistently growing at a faster rate than the supply of gold, output (y) outstripped money (m) and the result was a gentle, benign fall in prices (p) year after year.

That’s right, the United States along with every other industrialized nation experienced consistent and mild deflation even as their economies grew rapidly. So don’t let any Keynesians or central bankers tell you that the moment prices start to fall 0.5% the result will inevitably be another Great Depression.

VELOCITY: Finally there’s the more complex variable of velocity. The old economists of the Monetarist school and Quantity Theorists (which included Irving Fisher) assumed velocity was more or less constant. However we now know that’s not true although velocity tends to change very slowly—during normal times.

However in times of depression, financial crisis, and rapid inflation velocity tends to change more quickly.

Some examples: the easiest to follow is rapid inflation. Once the inflation rate breaks a high enough level, people start spending their cash frantically. They know the longer they hold their money the more value it will lose.

At the extremes workers in Weimar Germany received their pay at lunchtime and quickly handed it to their wives waiting at the factory gates to spend it all before the day ended. Prices were rising that quickly, doubling every 3.7 days and even changing midday.

So in a cruel spiraling effect, when rapid inflation sets in, velocity rises rapidly too which in turn raises prices even faster. The central bank usually responds by upping the rate of monetary creation to fund exploding budget deficits and the vicious cycle continues. This phenomenon explains why hyperinflations not only drive prices up quickly, but also accelerate with the inflation rate itself rising higher and higher.

Falling velocity, which applies closest in the coronavirus economy, is the most complex scenario.

Obviously consumers are an important driver of velocity. Healthy consumer spending is a large factor in maintaining dollar velocity.

However it’s not just the consumer who influences velocity. Firms have an even greater effect. Corporations are large spenders of money via not only worker salaries, but also capital investments and spending on operations (such as an airline spending on fuel or aircraft maintenance or a general contractor spending on steel, concrete, and heavy equipment).

If consumers and firms both cut back on spending and hoard their income as savings, one necessary condition arises for falling velocity.

But the largest mediator of velocity is banks and other financial institutions. Because most money is deposited in a bank, the bank’s propensity to lend or not lend serves as a conduit or chokepoint for monetary velocity.

So if consumers and businesses cut back on spending and save more, those savings are usually deposited at a bank of other financial firm. If the bank lends those savings out, the hoarded savings change hands and the hoarding-induced fall in velocity is moderated.

But if the bank sits on the funds and refuses to lend, as banks tend to do when their balance sheets come under strain due to recessionary bad loans or during financial crises, the hoarded savings get stuck in the banking system and all the necessary precursors are in place for a significant decline in velocity.

In the final installment we’ll apply the lessons of the Equation of Exchange to determine if the Federal Reserve’s aggressive monetary policy is conducive to rapid price inflation.
Posted by CDS at 12:00 AM