America's Highest Taxes and California Projects a $22.5 Billion Deficit... and We're Not Even in a Recession Yet

4 MIN READ - As a near two-decade resident of San Francisco the Cautious Optimism Correspondent for Economic Affairs and Other Egghead Stuff has the inside scoop on California’s budget burlesque. 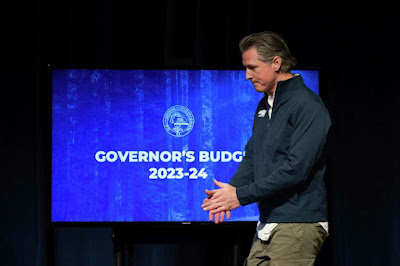 So Gavin Newsom, who was just crowing over a $100 billion budget surplus last year, is now facing a projected $22.5 billion deficit for FY2023-24. This is on top of the Golden State’s current $144 billion in outstanding debt.

So why, with the highest taxes in the nation, is California’s government heading back into the red again?

If you read the attached San Francisco Chronicle article...

...you’d think it’s all a tax receipts problem with a handful of rich Californians (that the state is overly reliant upon for revenue) due to the unpredictable variations in capital gains taxes and a down stock market year.

But the Economics Correspondent remembers better.

Here's a little background on how California got to this point.

When the Economics Correspondent first moved to California the highest marginal state income tax rate was “only” 9.3%. For singles, any income above an AGI of $40,346 (which is nothing in California) was taxed at a marginal 9.3% rate, even for multimillionaires.

Even with what was then the fourth highest income tax rate in the nation, California was still running large deficits. But as the national and California economies improved into 2005 and 2006 those deficits narrowed.

Then came the 2008 financial crisis and Great Recession.

With stock, real estate, and other asset prices plunging and the economy falling into a major slump California’s tax revenues nosedived.

Governor Arnold Schwarzenegger had run in 2003 as a moderate conservative. But in 2005, four out of four of his fiscally conservative state ballot proposals were rejected by voters and Schwarzenegger converted overnight to a fiscal liberal, announcing the very next day a package of new government spending programs.

But in late 2008 and 2009, faced with a huge deficit, Schwarzenegger backtracked and halfheartedly tried to convince the Democratic legislature to make budget cuts.

Schwarzenegger quickly abandoned spending cuts and compromised, announcing he would agree to tax increases during a major recession.

Immediately minority Republicans abandoned Schwarzenegger and told him “you’re on your own,” and he quickly moved with majority Democrats to enact a new “temporary” 11.3% tax rate on any income over $1 million.

As Ronald Reagan famously said, a temporary tax is the closest thing to eternal life on earth.

But in Schwarzenegger’s case he actually told the truth. The 11.3% tax rate really was temporary. Well, sort of.

Because in 2011 Jerry Brown moved into the governor’s mansion and, with the help of the Sacramento legislature, raised the top rate again, this time to 13.3%.

California continued to run large deficits each year until 2014, when a combination of a slowly improving economy and the higher taxes nearly closed the gap.

In 2015, seven years after the financial crisis, California finally ran a small surplus.

At which point California liberals in government, the media, and on Internet boards all lectured that “See, Republicans just don't get it. You need taxes to run a government” as if it’s impossible for a state government to function on less than 13.3% tax rates (never mind Texas and Florida can do it with no income tax at all).

Meanwhile wealthier and more productive Californians were steadily moving out, setting the stage for another budget crisis whenever the next recession came along.

The Economics Correspondent remembers several conversations with friends during that period where he repeatedly said “Yes, they bailed their budget out with a big tax increase and it will work in the short term. But as more high income taxpayers move out I guarantee you next recession they’ll discover even a 13.3% tax rate isn’t enough and run deficits again. At which point they’ll probably press for yet another tax increase.”

Well here we are, not even in a serious recession yet (that’s probably coming later this year) and the state is already forecast to run a $22.5 billion deficit. If the USA falls into a significant recession later that deficit will only increase.

So back to the San Francisco Chronicle article. 90% of the column blames erratic revenue streams for the forecasted shortfall but makes very little mention of spending.

Fortunately the Economics Correspondent has the data.

Therefore if the budget simply kept pace with inflation and population growth (+41.3%) California should have been spending $214 billion in FY2021 (July 2021 through June 2022).

While California blows egregious amounts of money on just about everything, the two biggest culprits are insane unionized government worker salaries and pensions and generous services for ballooning numbers of illegal immigrants.

In 2021 the Economics Correspondent posted truly preposterous specifics on California profligacy at:

This is no surprise to anyone familiar with how Sacramento… or Albany, or Springfield, or even Washington, DC for that matter, operates.

When recession arrives and governments run deficits, a “temporary” tax increase goes into effect, politicians declare victory, and then for every $1 in new revenue they find $2 in new spending.

The recovering national economy then masks the impact of the excessive spending increases and fleeing taxpayers… at least until the next recession hits several years later and the government falls back into deficit and crisis again despite the permanently elevated tax rates.

The Economics Correspondent will hardly guarantee this prediction, but if a serious recession strikes the economy in 2023 or early 2024 California’s deficit will expand to much more than $22.5 billion. And the odds are on Gavin Newsom and the Sacramento legislature then pursuing yet another tax hike—either raising the top rate yet again or, if they’re desperate enough, going after the middle class this time.